'Organic turmeric production likely to be increased in 2021

A total of 500 farmers of Kakching Organic Producer Company Private Limited are aiming to produce about 250 tons of organic turmeric. 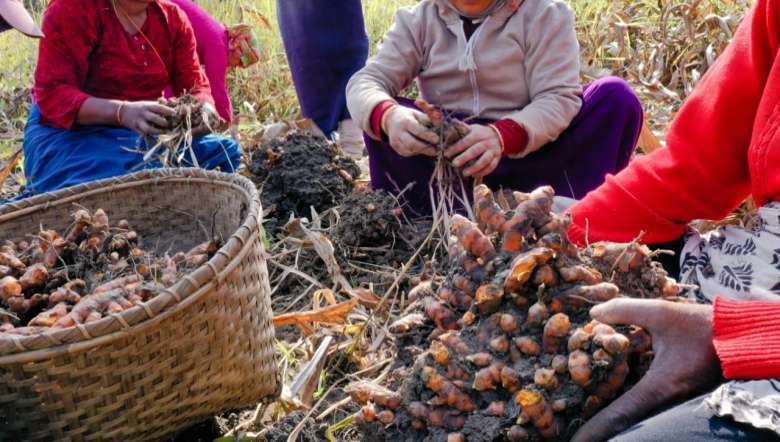 He was speaking to the media during a visit by project director, MOMA K Devdutta Sharma at an organic turmeric harvesting site in Kakching Khuman Kerjing hill, Kakching district. He said the company is planting turmeric on about eight hectares of land under Manipur Organic Mission (MOMA) of state Horticulture and Soil Conservation department. In addition to turmeric, 500 farmers of the company are also planting 5 hectares of organic ginger as well, he mentioned.

Achoubi said that harvesting of turmeric was started on Sunday, and it will be completed in a few days. He said the company harvested about 150 tons of turmeric last year, and it is planning to harvest about 250 tons of organic turmeric for the running year.

Similar organic turmeric is also being planted at Kakching Maning hill and ginger at Funal hill. The turmeric harvested today has been growing for the past 2 years, he added.

The turmeric farm has been providing jobs to many farmers and more farmers are trying to engage themselves in producing more organic turmeric as well as ginger, said Achoubi.

Consumers are becoming more health conscious and beginning to prefer to include in their daily diets organic agriculture products.

Project director of MOMA, Devdutta said there are 15 farmers’ producer companies under MOMA at present. Among the 15 companies, Kakching Organic Producer Company has been showing fast development due to the hard work of the farmers. By considering the fast development of the company, MOMA will extend more necessary assistance to produce more organic products. He said the farmers should not use any sort of chemicals.