The trend of filling up ponds for development or housing activities has resulted in water scarcity in urban areas of Imphal valley in Manipur. 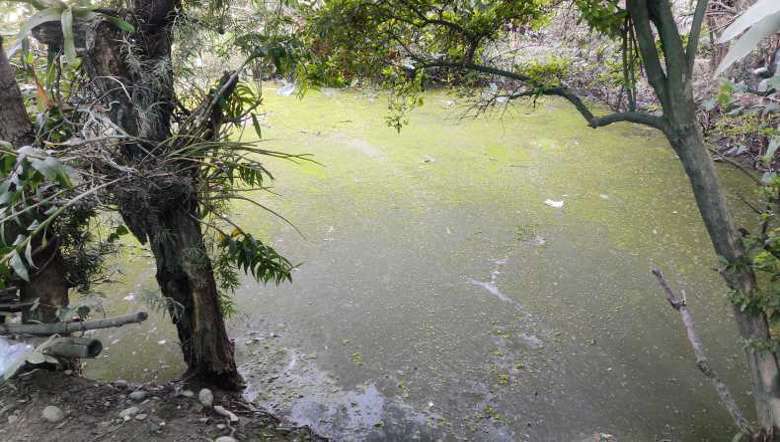 Ponds or pukhris in Meitei or Manipuri language once dotted every locality and residential areas in Imphal Valley decades ago. Today, one can hardly find them. The few that you can see are either drying up or the water is highly polluted and contaminated that one can hardly use it anymore. The gradual disappearance of the once ubiquitous household and community ponds has created a condition of water shortage in urban areas. The problem of water shortage persists despite the authority concerned taking up various projects, including watershed management and water treatment plants for potable water supply to every household in the state.

Since early times, people in Manipur were conscious of the advantages of conserving the environment and harnessing rainwater for daily use. In fact, the existence of ponds in every locality or place has historical, religious and cultural significance to the people in the state. There are several folktales highlighting the importance of ponds and the traditional system linked with them. The historical significance is clear evidence of how the older generations gave great importance to rainwater conservation.

However, the impact of population growth and rapid urbanization in recent years has resulted in an increase in the number of concrete buildings and development-related infrastructures. Development and housing activity has led to the replacement of thousands of ponds across the valley with landfill. Many of the surviving ponds are rather polluted and have become agents of diseases. 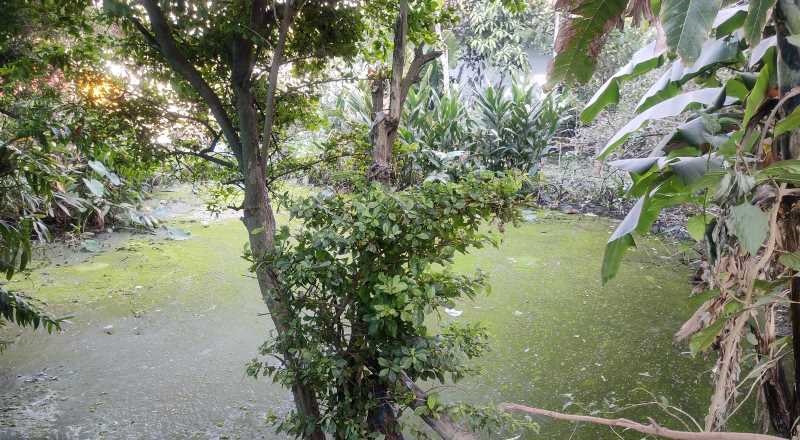 The trend of neglecting or filling up ponds for construction of structures was a continuing process since the past 20 to 30 years. As a result of it, tap water has become the only source for both domestic use and drinking purposes. However, tap water connection in every household is yet to be implemented fully in the state.

The Manipur State Water Policy (2015) of the Irrigation and Flood Control department states that as many as 19 water treatment plants were installed across the state to produce 104 million litres per day (MLD) for drinking water supply. However, these water plants could produce only around 81 MLD due to leakages caused by damages in the old pipelines and the dilapidated systems. The water generation has since gone down to 50 MLD during the dry season.

The said state water policy mentioned that the amount of water treated is inadequate even for the present 7.8 lakh estimated population in Imphal Municipality area alone. The total amount of water requirement for urban Imphal is at least 114 MLD or more.

Information gathered from the Public Health and Engineering Department (PHED) under the Atal Mission for Rejuvenation and Urban Transformation (AMRUT) states that around 50,000 households across the valley were connected with pipe water supply against the target of 57,000, achieving 87.72 per cent during the year 2020.

Speaking exclusively with the Imphal Free Press, retired PHED additional chief engineer, Loitongbam Swamikanta Singh said that the simplest method to address water scarcity is to analyze the amount of annual rainfall Manipur receives, which is higher than the all India average at 1881 ml. Some places are flood-prone due to heavy rain during monsoon season.

Considering this volume of rainfall the state receives on an average every year, if rainwater is conserved properly, there should not be a problem of water scarcity in the state through the year, Swamikanta  said.

Unfortunately, water stress is increasing every day due to mismanagement of water storage and distribution by government agencies and the public as well, he added.

Swamikanta pointed out that at one point of time there was no issue of water scarcity anywhere in the state as the people depended on either privately owned ponds and community ponds, or the rivers for both domestic and drinking purposes.

Nowadays, despite having enough water treatment plants, water shortage is increasing each day due to the tremendous increase in demand than supply particularly in urban pockets.

Swamikanta said the requirement for drinking purpose is around five litres maximum for every individual. Due to the lack of other sources of water for drinking and domestic purposes, people are compelled to fully depend on pipe water supply. However, the water supply in most places is irregular. For people who do not have a tap water connection, they are forced to buy water from commercial vendors, spending unaccounted money, he added.

Considering the worsening situation of water scarcity, Swamikanta said it is high time Manipur should step up to promote water conservation activities which were practised in earlier days.

Today, due to the ever-growing population and expansion of urbanization, there is not enough space in urban areas for houses to have individual ponds unlike in the past.

While it may be difficult to control the growing population and urbanization and change in climate, rainwater can be conserved through a rooftop rainwater harvesting method. This method is used by many houses. The process is simple and is affordable by every household, he added.

"The water scarcity that we are facing today is created by us, by destroying the environment recklessly. We are receiving water as a free gift from the almighty god. The problem was created by us humans and it is up to us to find the solution. Therefore, instead of just wasting it, let us conserve it. This will help to address the issue to a great extent," he said.

Swamikanta also said that deforestation is one major cause of water scarcity. The water run-off from heavy rainfall is lost when there is no mechanism to store the stormwater. The run-off causes flash flood, or people face drought-like situation during lean season as groundwater depletes. Keeping this situation in view, the harnessing of rainwater should be made viable and as a sustainable solution to address the water shortage.

He further said that when a state like Rajasthan where there is scanty rainfall can address their water scarcity by adopting rainwater harvesting effectively, then why can’t Manipur.

The annual rainfall of 1500 ml may also mean that people can conserve 1.5 metre of water, he explained while appealing to store it properly to use it whenever required.

Concerning the ever-increasing water problem, he said that the government should conduct a rigorous mass awareness programme on the essence and significance of rainwater harvesting.

Apart from this, the authority concerned should chart out feasible means to adopt this practice in every household as already emphasized in the Manipur State Water Policy 2015 framed by the Water Resources Department, earlier IFCD, he added. 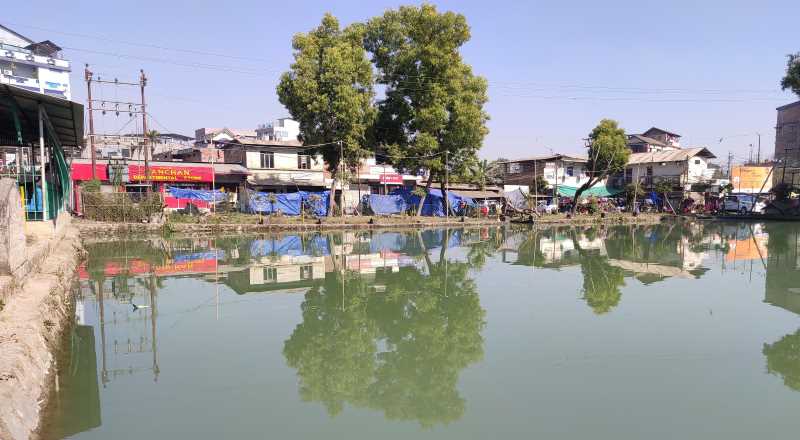 Stating the present condition of Khuyathong Pukhri Achouba which has been in existence since the monarchical period, Khoisnam Lukhoi, president of the Rising Knowledge Club Khuyathong, said that the situation of the pond is worsening in term of water level compared to the past 30 to 40 years. The local club is putting a great effort in preserving and maintaining the community pond considering its importance for the locality.

Lukhoi stated that the pond completely dried up about seven years ago, perhaps due to environmental changes or increased human use. In view of its importance, the local club filled water in the pond by tapping water from the Kanglapat by laying underground pipe. This was done twice, in 2017 and in October 2020. In the second filling, the water was released from the water reservoir located near the North AOC.

“Bringing water through the underground pipe without any support from the government is not an easy task. It requires a lot of financial and moral support. But in the interest of the public and historical significance of the pond, the club took the responsibility of saving the pond,” he maintained.

Lukhoi, in his 50s, continued that besides this initiative, “We love this pukhri as it is associated with the history of Manipur. We always have a nostalgic feeling whenever we see this pond.”

Despite the availability of tap water in surrounding areas of Khuyathong, people continue to rely on the pond for domestic purposes. Besides this, it is used as a public utility by the fire services, and by the locals for taking a ritual bath after attending funerals, he added.

Drawing the attention of the state government, Lukhoi says that it would help the locality to a great extent if the government gives attention to maintaining the pond at Khuyathong located in the heart of Imphal city.

“With the changing times, water in this pond used to get polluted despite various restrictions and norms being imposed to keep the water clean. The community will be highly grateful if the relevant government office comes and check the quality of water from time to time and give scientific ways to keep the water in the pond clean,” he added. 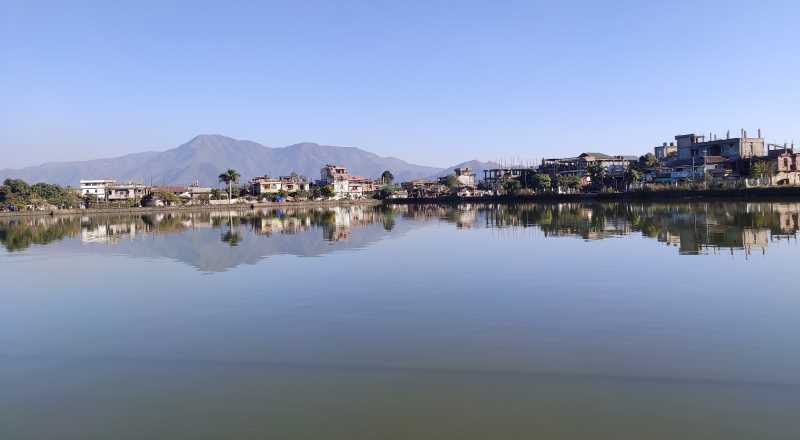 Speaking on the Ningthem Pukhri located at Wangkhei, which is almost 300 years old, Athokpam Hemchandra, former secretary of the League of Callow Patriots (one of the local club in Wangkhei Ningthem Pukhri) stated that the value of the pond is decreasing by the day due to the degradation of its water quality. However, people still continue to depend on it though the water is polluted and may be harmful to the body.

Hemchandra stated that the pond water was once potable, but these days it is not even fit for domestic purposes. There was an instance of mass death of fish in the pond at one point of time. Local people also reported skin allergy after using its water. As a result, swimming in the pond was prohibited.

“The swimming club of Wangkhei Ningthem Pukhri produced so many swimmers in the state. But the prevailing condition of the pond is such that it is no more possible to provide such service anymore,” he said, adding that despite it, people from many areas come to fetch water from the pond.

Pointing out one of the major reasons for pollution of the pond, Hemchandra said that the commissioning of Ningthem Pukhri Water Supply in 1983 was the root cause. With the commencement of this water supply scheme, the water of the pond has to recharge from Imphal River. This system has disturbed the original water quality of the pond. After complaints from the locals, the functioning of the water supply to residents was stopped. However, the condition of the pond is yet to be restored.

The issue of water scarcity has brought upon water stress on the people. It has become a growing concern not only in Manipur but also in every state of the country. To address it, the government has to take up various speedy measures for the people to access tap water connection by 2024.

In the case of Manipur, addressing this issue as an opportunity and taking the step to preserve the age-old pukhris could be a wise strategy. This will not only ease the problem of water shortage but would also help to conserve the traditional practice of water harnessing through community ponds.

(This feature was written under Media Fellowship on Climate Change reporting of the Directorate of Environment & Climate Change, Manipur)