What lies ahead for private schools in 2021

Expert said the National Education Policy, which was approved by the cabinet in July 2020, with its focus on foundational or early learning, could help, but its implementation is likely to be slow. 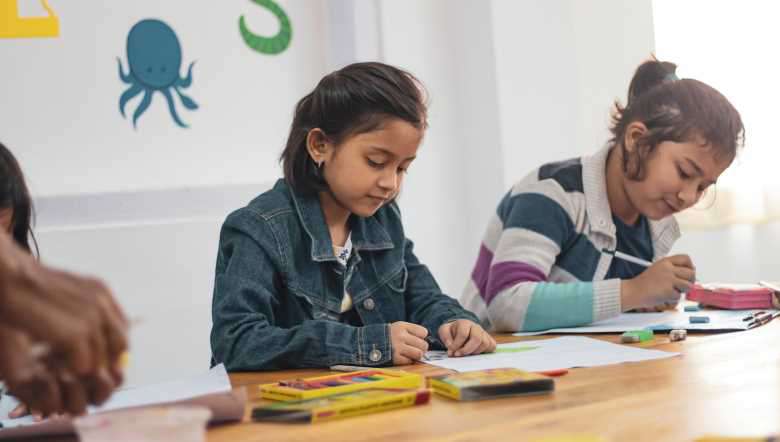 Jaipur: Fourteen-year-old Alisha Saini loves to study. "I understand everything I am taught in school and what I don't, did next-door helps me understand," she said. But she couldn't access online classes, between March 24 and August 2020, when the government senior secondary school in Dorasar, in northern Rajasthan was shut, like all other schools in the country, because of the COVID-19-induced lockdown. (The Rajasthan lockdown began on Sunday, March 22.)

Teachers would WhatsApp lesson links to students, but few students could access those, and few of those who could access understood what was being taught, survey data, students and teachers told us. Even bright students like Alisha were unable to keep up. "My father has a smartphone but he is out of the village at least 15 days a month for work," she said. Alisha's father helps run a small eatery (bhojanalaya) in Jaipur, three and a half hours from their home.

"This has been a devastating sort of year," said Bikkrama Daulet Singh, managing director at Central Square Foundation(CSF), a nonprofit working on school education. "There is going to be an impact on student learning."

More than 80% of parents with children studying in government schools reported that education was "not delivered" during the lockdown, because families did not have digital devices or access to digital learning, a survey by nonprofit Oxfam India in Bihar, Chhattisgarh, Jharkhand, Odisha and Uttar Pradesh in May and June found.

This problem is not unique to India. At least 463 million students globally were unable to access remote learning during school closures because of COVID-19, either due to a lack of remote learning policies or lack of equipment needed for learning at home, UNICEF had found.

We spoke to experts on how children can make up for the learning losses during the pandemic and what lies in store for the education sector in 2021.

Schools in India should prepare for a gradual re-opening, experts told us. Younger children should be the first to go back to school as early learning is important to build on in the future years. Teachers would have to understand the level children are at, re-teach core concepts as well as parts of the 2020 coursework, before they start on the 2021 syllabus, they told us.

Here, the National Education Policy, which was approved by the cabinet in July, with its focus on foundational or early learning, could help, but its implementation is likely to be slow, experts said.

On the bright side, "thanks to the crisis, we have had to try a lot of new things and that has led to accelerated learning for the school system and for families," said Rukmini Banerji, the chief executive officer of education nonprofit Pratham. Two of these, understanding and developing the right kind of educational technology and making sure that schools and families are not in silos but rather in constant interaction with one another, would help students learn and prepare the school system for such situations in the future, experts said.

Getting back to school

"With appropriate distancing, school should begin," said Mamta (she uses one name), a government school teacher in Bugala, Rajasthan. She teaches math from grade V to grade X. "Online is not as successful as offline. We are able to teach better offline and children understand more too," she explained. "Most of the guardians we have interacted with now understand that with precautions, life has to go on...they will send their children to school."

The youngest children should be going to school first, Singh of CSF suggested, explaining that missing the foundations of learning makes it harder to progress in future grades. It is also easier for older children to study on their own, and with the help of textbooks, compared to younger children.

Alisha, the student from Dorasar, is one of the lucky ones--in-school teaching began in September for grade X students in her area. For children from pre-primary to grade VIII, in-school teaching is yet to begin. More than half-way through the school year, only about 13 of the 23 students (56%) come regularly, she said. "There are some new students who had enrolled but I have never even seen their faces," she said. When school began it was like coming back to a new school year, teachers assumed that children had not been able to keep up with learning online and they started from scratch.

"There will have to be a 90- to 100-day bootcamp," said Singh. "Only after children are clear with the main concepts, can we move forward," Mamta agreed.

"This [making sure that children know the core concepts] should anyway be done, but perhaps this will make it a part of the education system," said Banerji. Further, school systems should "reduce the tension about the loss of a year… it is not like children have not learnt anything. They have learnt many skills", which the schools should recognise, said Banerji. Schools rarely concentrate on "learning for life", which includes skills that one would use everyday, such as collaborating on a project, or health education. The pandemic might move schools to include these rather than only concentrate on "learning for more schooling" as they currently do, she explained.

Family members are trying to help children as much as they can at home, Banerji said, adding that Pratham's survey, the Annual Status of Education Report 2020, found that nearly 70% of children had had help from a family member in the week before the survey.

Even before schools re-open, schools should involve parents and convince them to send their children back to school, Banerji said. "It will need a lot of human effort, which is a good thing because schools and families need to be closer together in any case to give children a better education than we have been able to do."

Government schools are also maintaining a connection with families and children through home visits. In Mamta's district, since November 6, the class teacher goes to children's houses every Monday and gives them the lesson of the week in print and the homework they should do over the week. If the child has a problem with the work, the teacher helps them at home, Mamta added.

Some of these schools were unable to collect fees during the lockdown, even for the last term of 2019-20, said Singh of CSF, based on a survey the organisation had done. Because most private schools are low cost, they either did not have access to technology to support online learning or their students could not access online education, Singh said.

This is much higher than what families spent on the education of children studying in government primary schools (Rs 1,092 in rural and Rs 2,413 in urban areas). Though private schools perform better than government schools on children's learning outcomes, not all children in private schools learn at their grade level. For instance, 46% of private school students, seven and eight years old and enrolled in grade I could not even read words, compared to 61% of government schools students, show data from the 2019 ASER survey in rural districts.

"The private school sector will recover [from the impact of the pandemic] over time and students will come back to these schools," even without government help, said Singh. "Should the government let this sector grow haphazardly, as it has been so far or should there be good regulations?" asked Singh. He suggested the central government draft a model law that states could borrow from for their own laws to regulate the sector and make sure children learn in these schools.

For the government, 2020 has almost been like a "prep year" for the NEP with the COVID-19 pandemic, said Singh.

Yet, "a large part of 2021 is going to be a reboot, restart year and planning for what happens if these closures happen again", said Banerji.

The NEP also emphasises early learning and pre-primary education for children. Work on this has begun in the states but it has to "gather steam", Banerji said. Two ministries--one for women and child development, under which the anganwadis (that provide care and nutrition to mothers and young children) function, and the other for education, that oversees primary school, would have to work together to implement this, she said.

Experts have said that it is unclear where the money to fund the NEP would come from. It is also unlikely that more funding would be available in 2021, experts said. But "is the money that is already in the system being used for the maximum impact?" asked Banerji. Singh suggested the government should reallocate existing funds to behaviour change communication, district-level assessments, training material for teachers and classroom material and books for children and NEP implementation support and quality assurance. For grades I to III, CSF estimates the total cost at Rs 2,250 crore a year compared to Rs 1,600 crore allocated in 2019-20, he said.

The privileged private sector is already doing a lot of what the NEP says on pre-primary schooling, experts said. "It is the low-cost private schools that are under great threat as they work on very small margins. They also do not have the resources to implement the changes that the government might require them to do," said Banerji.

The next step would be to know which kinds of educational technology and software work well for learning. Governments and schools need to know "how can I be prepared the next time this happens". He gives the example of an index that some people are working on, which compares the various software available and rates them based on how they work for teachers, student learning, remedial learning and so on.

At an event on December 22, the education minister said that learning material and classes were not just available via the internet on the government's DIKSHA portal but also through a television channel, Swayam Prabha. It will soon also be available on radio, he said.

Still teachers find online teaching challenging--84% of the teachers surveyed in Madhya Pradesh, Rajasthan and Chhattisgarh in September 2020 said it was difficult or impossible to maintain an emotional connection with children during online classes, found a study by the Azim Premji Foundation. More than half (54%) of the teachers surveyed in Chhattisgarh, Madhya Pradesh, Rajasthan, Karnataka and Uttarakhand said that their knowledge and user-experience of online platforms and modes of teaching were inadequate.

Only about half of the 29 students in Mamta's class were able to connect through WhatsApp or such online learning through SMILE, a Rajasthan government project for online learning through which lessons are sent via WhatsApp to teachers. Teachers then sent the content--links, videos etc.--to students. She prefers in-school teaching but said that WhatsApp should be continued even after schools restart, said Mamta. "It helps families know what is happening in school and whether children are studying." Even though older children are back in school, she continues to use WhatsApp to send children lessons created by SMILE, she said. "Combine the old with the new," she said.

(The article was first published in IndiaSpend on December 29, 2020)

Writer and editor at IndiaSpend, Shreya Khaitan is a graduate of Global Human Development program at Georgetown University, Washington DC and has worked with The Wall Street Journal, Mumbai.