The wildfire in Dzuko Valley in Manipur-Nagaland border started on December 29 evening and has, so far, destroyed over 200 acres of Mount Iso Range. 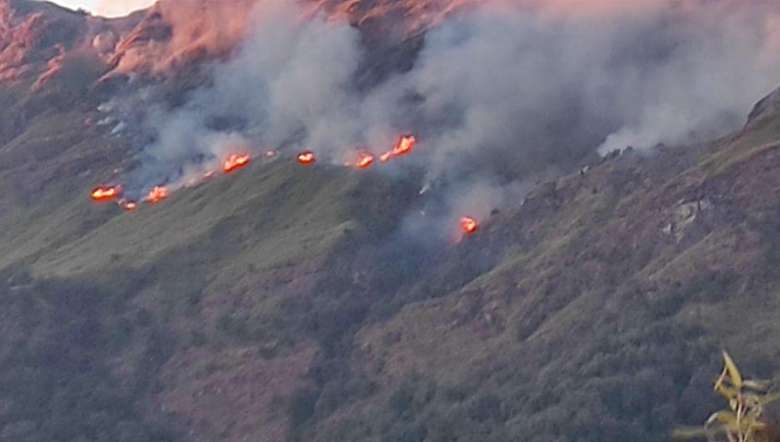 As the wildfire in Dzuko Valley on Manipur-Nagaland border continued to sweep over the hill ranges for the fourth day on Saturday, efforts continued to control the raging inferno.

"The @NDRFHQ has now deployed 60 personnel at the wildfire site at Dzuko valley. Also 2 helicopters equipped with Bambi bucket have been deployed to fight the wildfire. Thanks to Hon'ble HM @AmitShah ji @DrJitendraSingh and all concerned for the swift response," Manipur Chief Minister Biren tweeted.

The wildfire that started on the evening of December 29 in the Dzuko range from the Nagaland side spread to Dzuko in Senapati district of Manipur. So far, over 200 acres of Mount Iso range has been reduced to cinders.

Two Indian Air Force Mi-17 V5 helicopters were also deployed to spray water. Till 1 pm, the two helicopters had completed eight sorties together. Later in the afternoon, it was reported that one more helicopter was pressed into action. Another helicopter is expected to join the operation later, the DIPR stated.

On Friday, the Indian Air Force deployed four choppers equipped with bambi buckets to battle the fire at the Dzuko valley.

"Yesterday C-130J of @IAF_MCC airlifted 48 personnel of @NDRFHQ along with 9T of firefighting eqpt. IAF has deployed 4 Helicopters equipped with Bambi Bucket to control the fire at Dzukou Valley near Kohima," PRO Shillong, Ministry of Defence, tweeted on Saturday.

Earlier, Union Home Minister Amit Shah took stock of the situation and assured all necessary assistance to Manipur CM N Biren Singh from the Home Ministry to control the wildfire.

"Just received a call from Hon’ble Union Home Minister Shri @AmitShah Ji to assess and discuss the situation about the wildfire at Dzuko valley. Amit Shah Ji has assured all the necessary assistance from the  Home Ministry to contain the situation at earliest," CM Biren had tweeted.

The Manipur CM thanked the union home minister for his timely intervention and also the local people of Mao for their support.

CM Biren, in a Facebook post, said that the Fire Brigade personnel, along with some local volunteers had doused the wildfire at eastern side spreading from Mount Khungho towards Mao.

Meanwhile, Public Health Engineering Minister Losii Dikho, who is currently camping at Mao to supervise the operation, chaired another round of joint meeting with the representatives of Senapati District Administration, Police, NDRF, SDRF and Fire Service, to review the situation on Saturday, the DIPR stated.

During the meeting, it was decided that a base camp would be set up at the eastern side of Mount Iso range. The Deputy Commissioner of Senapati district will provide tents for the base camp. The tents will be transported by the district police vehicles.

It was reported on January 1, 2021, that after a thorough analysis of the nature of the wildfire and the landscape of the region, a combined team of Senapati District Police, fire service and local volunteers cleared a stretch of around a half kilometre of forest vegetation in between the third and the second mountain of Mount Iso range. The team successfully prevented the spread of the fire towards the eastern side by using sand and fire extinguisher. However, the inferno continued on the southern and western side and approximately 200 acres of Mount Iso range had already been reduced to cinders.

On December 30, a team of officials of Mao police, Forest Department and local volunteers from Mao areas numbering around 130 went for spot verification and to prevent the spread of the fire. However, it was hard to extinguish the fire as it was spreading fast in the dry small bamboo bushes due to the speedy wind.

In the early morning of December 31, 2020, a team of Manipur Police led by three Additional SPs along with Fire Service officials led by Joint Director and local volunteers numbering around 150 under the overall supervision of Senapati SP rushed to the spot to stop its further spread. The team faced difficulties to prevent the spread of fire due to steep slope and speedy wind.

Biren along with chief secretary Rajesh Kumar and DGP LM Khaute had also undertaken an aerial survey of the area to take stock of the situation on December 31, 2020.