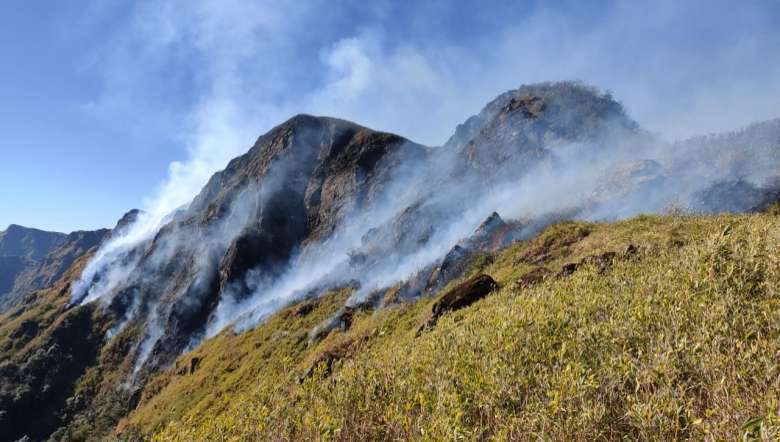 A massive wildfire that has been raging for the past few days in Dzuko range has engulfed a large area of the valley.

With the fire spreading towards Manipur’s Mount Iso, the highest peak in the state, Chief Minister N Biren Singh on Thursday conducted an aerial survey of Dzuko valley in Senapati District.

The chief minister, accompanied by chief secretary Rajesh Kumar, DGP LM Khaute and Senapati DC Th Kirankumar, boarded a helicopter and took stock of the situation from around 11:30 am. The survey continued till around 1:30 pm.

The state government had also requested the National Disaster Response Force to provide assistance in containing the situation and had also requisitioned the Army and the Assam Rifles to assist firefighters in extinguishing the wild fire.

It was said that the wild fire might probably have started about 2-3 days ago from the Nagaland side and crossed over to Manipur side.

District Forest Officer (DFO) of Senapati district said, “Villagers near the border said that the fire was first noticed from December 28 from other side of the border. However, it is not clear when the fire was started and why. The matter is under investigation”.

However, with the fire spreading to our border we initially sent a team comprising of villagers and forest official, said the DFO.

The initial attempt to control the fire manually was not successful due to high velocity wind and the steep terrain, he said adding “To reach the border the team had to track the steep terrain for 14 km”.

Following the first team, 200 Firefighters had also been deployed and reached the spot.

Meanwhile, Mao Council in a statement condemned the setting fire of the Dzuko and Mt Iso where a vast area of virgin forest have been engulfed by the wildfire causing irreparable loss to the nature. It urged the government to give a befitting penalties to those involve in the incident.