Manipur Chief Minister N Biren Singh said that the wildfire which started on the Nagaland side has crossed Mount AsIi, the highest peak of Manipur. 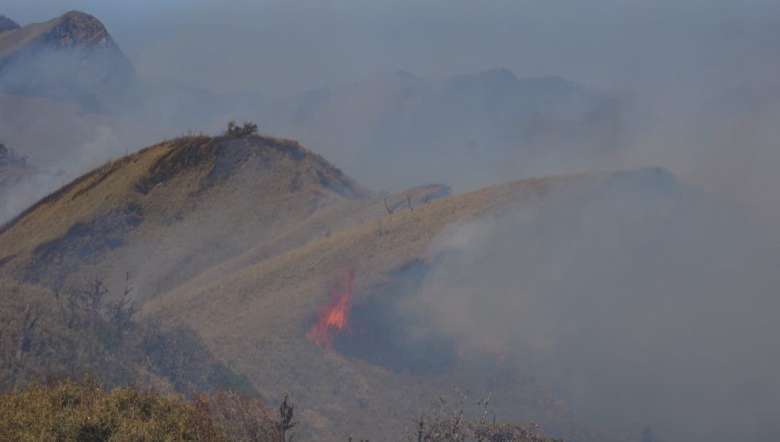 A massive wildfire has engulfed the scenic Dzukou Valley located at the Manipur-Nagaland border and has been raging since Tuesday evening.

Manipur Chief Minister N Biren Singh posted a series of photos and videos and sought help from concerned authorities to douse the wildfire and save the deep forest portion of the valley.

The chief minister said that the wildfire at Dzuko valley is very alarming and needs immediate attention before it spreads towards Mt Iso.

Taking a serious view of the wildfire, CM Biren on Thursday took an aerial survey of the situation and said that the government is seeking assistance from the NDRF to contain the fire. The fire service, forest official and volunteers are reaching the site, CM Biren said.

"Conducting an aerial survey to take stock of the wildfire that broke out at Dzuko valley 2-3 days back. The fire has spread quite extensively and caused serious damage on this part of the mountain range. The Fire service, Forest official and volunteers are reaching the site," CM Biren tweeted.

CM Biren said that the wildfire which started on the Nagaland side has crossed Mount AsIi, the highest peak of Manipur.

"This photo is clicked at 8.30am from Mao side at mount khugho.(Dzuko FIRE)It has already crossed Mount ASIi the highest peak of Manipur.If the wind direction going to southern side,There is high possibility of entering in the thickest forest call Koziirii in Manipur. Need help," CM Biren tweeted on Thursday morning.

"Very unfortunate, that a wildfire has started at the Dzuko Valley, one of the most beautiful places in Manipur. It probably started about 2-3 days ago from the Nagaland side and crossed over to our side. It is likely that the fire might even reach Mt.Iso area Today," Biren tweeted.

In another tweet, CM Biren said that officials and villagers could not enter the burning areas as the scale of fire is too large with strong winds. There is no proper equipment. It may be difficult to control by manpower. The grasses are dry, he added.

The Manipur CM said in a Facebook post that he would be going to Dzuko to have an aerial view of the wildfire.

"Now I am going to Dzuko to have an arial view of the wild Fire, sending more personal to the spot," CM Biren wrote in his post.

The cause and extent of damage of the fire are yet to be ascertained, according to reports.

As per reports, the Indian Air Force has engaged an Mi-17V5 chopper equipped with bambi bucket for dousing the fire.

"Based on the requisition by the State Government of Nagaland, the Eastern Air Command, IAF has launched a Mi-17V5 helicopter. The helicopter is equipped with Bambi Bucket for fire fighting in Dzukou Valley near Kohima," a spokesperson of the Shillong-headquartered Eastern Air Command said.

The Nagaland State Disaster Management Authority (NSDMA) on Tuesday confirmed the fire and had requested IAF choppers to douse the fire which was fast spreading owing to the windswept weather condition.