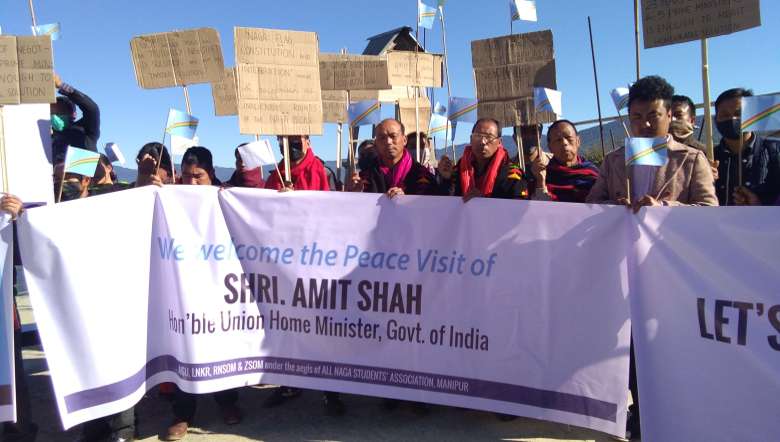 Speaking to media persons, president of RNSOM, Daichuipou Gangmei said that the students’ bodies are welcoming Amit Shah under the aegis of All Naga Students Association Manipur (ANSAM). He also said that the hill people have appealed to the home minister to settle the pending Naga issues with honourable and acceptable solutions.

He also read out the memorandum to be submitted to Amit Shah on his visit to Manipur, requesting him for the logical conclusion of the Indo-Naga Peace Talk with due recognition of ‘Naga Flag and Constitution’ and integration as ‘Inalienable Rights’ of the Naga people.

The unprecedented recognition of the ‘unique history and situation of the Nagas’ by the Central government under the leadership of the then Prime Minister Atal Bihari Vajpayee in the year 2002 demonstrated the seriousness and genuine concern for settlement of the sub-continent, the memorandum mentioned.

It further stated that the Naga people wholeheartedly welcome and endorse the Framework Agreement on August 3, 2015 between the Government of India and National Socialist Council of Nagaland that was signed ceremoniously in the presence of Prime Minister Narendra Modi at New Delhi. It gave the Nagas high hopes for an early and logical settlement of the Indo-Naga issue.

The Naga people from entire Naga areas comprising all the tribe Hohos, apex civil voluntary organisations which included Naga Hoho, Naga Students' Federation Naga Mother's Association, Eastern Naga Peoples' Organisation and United Naga Council; and church leaders, had unanimously given their mandate to the NSCN to negotiate with the Centre for an honourable and acceptable solution on January 21, 2005 at Hebron Camp, Dimapur, it stated.

Today the Naga people are eagerly waiting for the wholesome and inclusive political solution for the entire Nagas living in contiguous Naga areas. ANSAM would like to strongly emphasise that it was the realisation of the ‘political nature of the Naga issue on the part of India that paved the way for negotiation, the memorandum stated.

It also stated that the 23 years of political talk demands a logical conclusion with due recognition of ‘Naga Flag, Constitution and Integration’ as our ‘Inalienable Rights’. Any agreement without ensuring these will not address the political aspirations of the Nagas as a people.

“This is for the simple reason that Nagas do not claim even an inch of land that lie outside our clearly defined ancestral domain nor do we object to the legitimate rights and aspirations of neighbouring communities and states. We would like to assert that the Government of India must focus on one mutually negotiated solution,” the memorandum stated.

“Taking this opportunity, we appeal to your good office for immediate cessation of all military campaigns and political witch-hunt against the Naga leaders, human rights activists and national workers which is contrary to the spirit of the ‘cease-fire’ and ‘peace talk’. The vital importance is to create the congenial environment for the impending settlement of the Indo-Naga issue," it added.