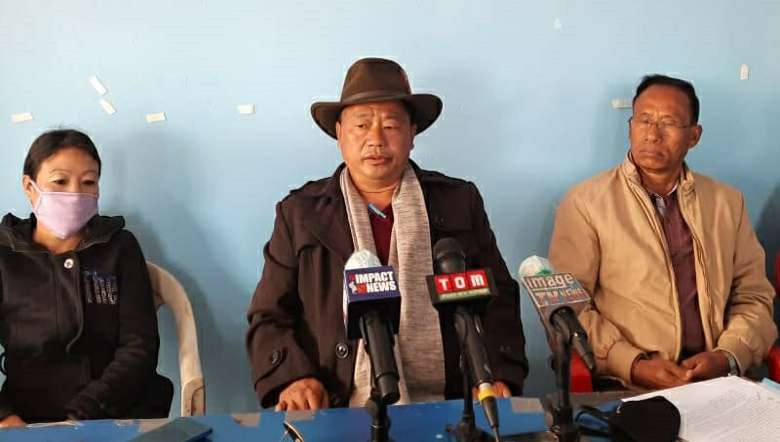 Zeliangrong civil bodies have alleged the NSCN-IM of constantly threatening their leaders and harassing the son of Zeliangrong Baudi (Assam, Manipur and Nagaland) president, most recently on Thursday. The bodies on Saturday demanded the authority concerned to take action against those involved by January 1.

Condemning the NSCN-IM for its alleged actions, the Zeliangrong bodies resolved to take various agitations unless the state government fulfils their demand before the given deadline.

In a press conference held at Manipur Press Club on Saturday, president Zeliangrong Baudi (AMN) Athuan Abonmei said the NSCN-IM had been trying to exploit the natural resources for their business, and the Zeliangrong bodies had confronted them against such activities.

Following the order issued by NSCN-IM, the leaders of the Zeliangrong bodies were continuously threatened under various circumstances, he further alleged. Even during COVID-19 pandemic, their cadres threatened the leaders of said organisations when they were conducting COVID-19 awareness programmes on May 31, he added.

Recently on December 24, his son Arai Abonmei was physically assaulted, he said. “My son, Arai Abonmei was harassed by some cadres of NSCN-IM at Pallang Village under Tamei district. He was assaulted while visiting his maternal grandmother. The cadres abused him for being a son of president Zeliangrong Baudi (ANM). An FIR was lodged in connection with said incident at Tamei Police Station,” he said.
He said that the NSCN-IM is under a cease fire agreement with the government of India. As such, the state and central government should take responsibility if any untoward incident happens to the Zeliangrong bodies due to the attacks or threats by the NSCN-IM.

“We cannot accept any kind of order issued by such a group as NSCN-IM, and we strongly condemn their action of openly harassing the people by using arms,” he said while appealing to the authority concerned to punish those cadres  involved in the recent attack, which occurred on December 24.