IFP EDITORIAL: Restricting graduates in any discipline with a diploma from JNMDA or other recognised institutes from getting admission in the Masters Course of Manipur University of Culture would be a grave injustice and against the UGC norms as well. 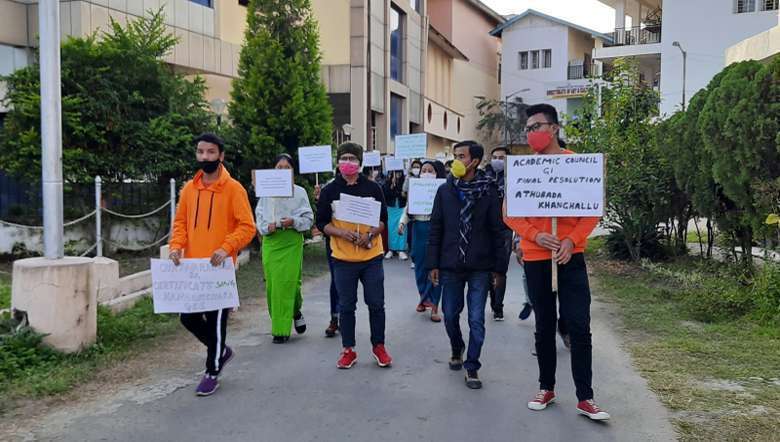 It is indeed sad that the Manipur University of Culture has run into trouble for no fault of its own. Without a regular Vice-Chancellor and Registrar and an adhoc arrangement of administrative head of the government, the university had to run into problems. Right now, the Commissioner of Arts and Culture is acting as the Vice-Chancellor and a deputy Registrar is in charge of the Registrar of the University. Therein lies the problem, as they do not have the mandate to carry out certain responsibilities but still has the ability to create problems and nuisances. This seems to be the problem plaguing the University of Culture now. Teachers of Jawaharlal Nehru Manipur Dance Academy (JNMDA), who were the members of Manipur University of Culture (MUC) academic council, have tendered their resignation. The resigned teachers also resolved to abstain from participating in any activities related to the university. The decision was a fallout of the controversy surrounding the denial of admission to students of three institute in MA course of Culture University.

The problem now is related to the admission issue. Students of the MUC disrupted a meeting of the academic council of the University on November 28. The students destroyed few properties of the university and even a few of the teachers were also hurt. Students of MUC were protesting that graduates with certificates from institutes not recognised by the University Grant Commission should not be allowed admission to MA in the varsity. Their main demand is that students other than those who passed graduation from the university should not be allowed admission in the university, and that students who passed out from cultural institutions like the Jawaharlal Nehru Manipur Dance Academy (JNMDA) with diploma certificates should not be allowed. That much is right, as diplomas cannot be equated with graduates. But restricting graduates in any discipline with a diploma from JNMDA or other recognised institutes from getting admission in the Masters Course of Manipur University of Culture would be a grave injustice and against the UGC norms as well.

Academy Secretary Bilash Singh was right in saying that teachers of the academy took active role in framing the syllabus of the courses in the MUC. Teachers of JN Dance Academy are included in the expert committee of the university and they have been even utilised as examiners of the University of Culture. However, it is unfortunate that the students of the academy, including the Music College and Dance College recognised by the state are denied MA admission in the university on the pretext that institutes are not recognised by University Grants Commission, according to Mr Bilash. But, it has to be understood that besides the diplomas given by government recognised institutes one has to have a graduation certificate in any discipline for pursuing a Masters programme. If the agitating students are against this also, they should be taken to task. They have no right to refuse admission to graduates with diplomas in dance or music from recognised institutes to Masters programme in the Manipur University of Culture.

But, we have to say the behaviour of certain students who stormed the academic council meeting of the Manipur University of Culture was unbecoming and to be condemned. The tradition of Manipur culture is such that the Guru-Sishya parampara is highly respected and practiced among them and the enthusiasts of culture. When that tradition is breached with throwing of chairs and disrespect, the elders or the Gurus are pained. We need to respect that and those who violate it should be punished.

‘Academic council of MUC must think for students’ future’