The apprehended traffickers have been handed over to Moreh Police for further investigation. 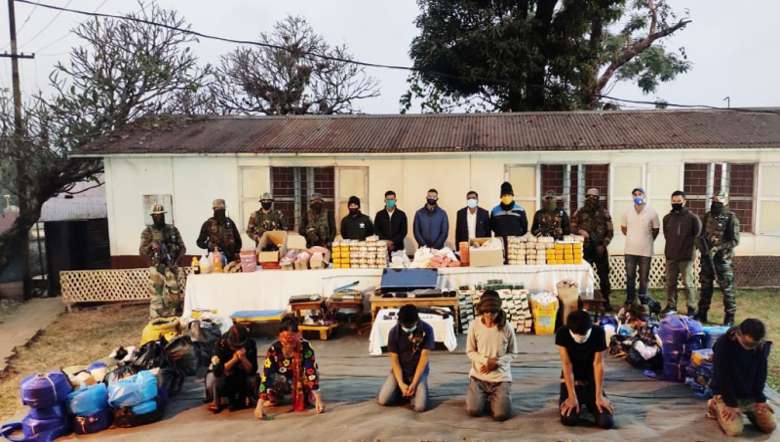 During the raid, two Myanmarese nationals and four Indian drug traffickers were apprehended. The team also recovered a foreign made pistol and a gun along with ammunition.

According to PRO Defence Wing, information of the traffickers planning to enter India for the drug trade was received one week ahead and the security forces have been staying alert.

On Monday, two teams of the combined security forces intercepted the traffickers after they crossed into the Indian side, said the PRO.

“In a well planned and orchestrated operation based on hard intelligence, Assam Rifles raided two locations in the border town of Moreh in Manipur on December 7 morning alongwith Police and NCB. The raid unearthed a large haul of narcotics and contrabands estimated to be worth over Rs 165 crores”, the PRO added.

The apprehended traffickers have been handed over to Moreh Police for further investigation.

Meanwhile, a troop of Assam Rifles intercepted brown sugar worth about Rs 2.92 crores at Larong-Khongjol road in Chandel district being smuggled from Myanmar on Tuesday.

The consignment was seized by the troop from two individuals who were heading from Myanmar in two different bikes.

It is said that the arrested individuals along with the seizures have been handed over to Chandel police station for further investigation.

Due to the rise in drug addiction among youth of the region, Assam Rifles is carrying out extensive operations in close coordination with civil administration and police for controlling the drug peddling nexus in the region, the AR said.

Manipur shares 398 kms stretch of border with Myanmar and most of the stretch is porous.