The chief minister also announced that the state cabinet meeting schedule for December 9 at Senapati district headquarter will take decision to extend PM-SVANidhi and MUDRA schemes to hill districts. 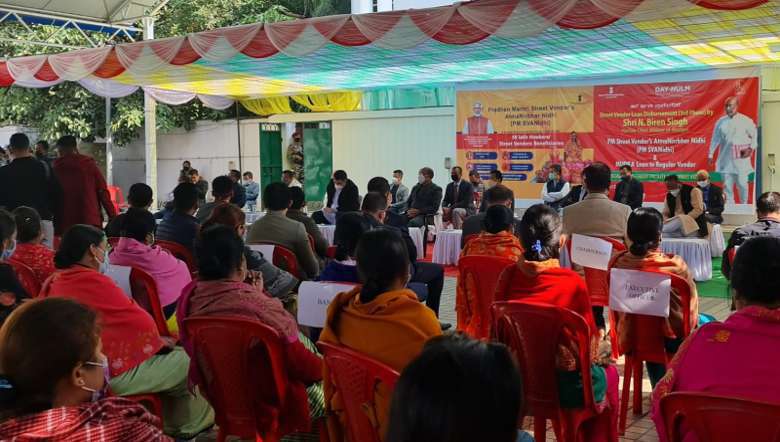 The chief minister also announced that the state cabinet meeting schedule for December 9 at Senapati district headquarter will take decision to extend PM-SVANidhi and MUDRA schemes to hill districts.

Speaking at the occasion, Biren informed that construction of 10 new women’s markets would soon begin in the hill districts and in Bishnupur and Sekmai.

Lauding women’s role in the economic activities in the State, he stated that improvement of rural economy is the key in developing overall economy of the State.

Under Tribal Cooperative Marketing Development Federation of India (TRIFED), more than 1,000 self help groups have been formed in hill districts and it has benefited around 30,000 people, said Biren.

While appreciating different banks for providing loans to vendors and others, the chief minister said that the banks which provide maximum help to the poor and needy people would be rewarded in the next Independence Day celebration. The chief minister however cautioned that he would not tolerate if any bank insult or ill-treated the people.

Minister of MAHUD, Okram Henry said that the amount given to each vendor would help the vendors in restarting their business and ease the hardships caused by the pandemic.

He also appealed to the vendors to repay the loans on time so that they can apply for a bigger amount.

Under PM-SVANidhi, each street vendor can avail loan up to Rs 10,000 repayable in monthly instalments within a period of one year. The scheme provides interest subsidy of seven percent on regular and timely repayments and also incentivise digital transactions by vendors by providing monthly cash back up to Rs 100. Further, the vendors can avail the facility of escalation of the credit limit on timely early repayment of loan.

Council of ministers and MLAs were also present in the function organised by the Manipur Urban Development Agency (MUDA).