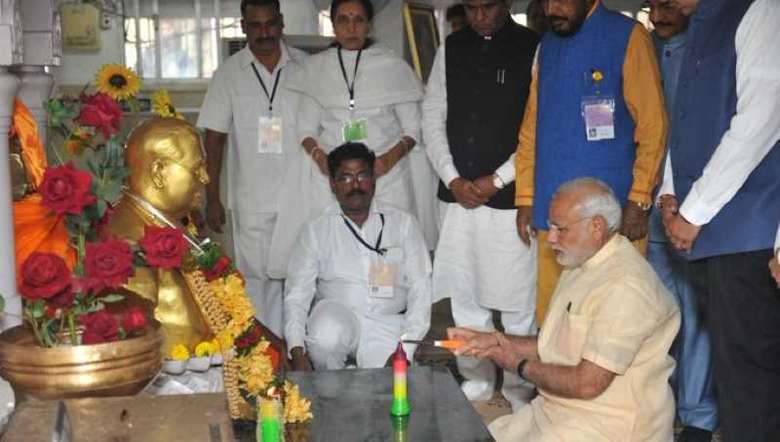 Prime Minister Narendra Modi on Sunday paid tributes to Babasaheb Ambedkar on Mahaparinirvan Diwas and said his government is committed to fulfilling the dreams the great leader had of India.

Remembering the chief architect of the Indian Constitution on his 64th death anniversary, the prime minister took to Twitter and tweeted along with a picture of him lighting candles and offering floral tributes to Babasaheb Ambedkar.

"Remembering the great Dr Babasaheb Ambedkar on Mahaparinirvan Diwas. His thoughts and ideals continue to give strength to millions. We are committed to fulfilling the dreams he had for our nation," the prime minister tweeted.

Union Home Minister Amit Shah also took to Twitter and tweeted in Hindi on the occasion.

"On this Mahaparinirvan Diwas, I bow before Babasaheb who gave the country a futuristic and all-encompassing Constitution that made way for progress, prosperity and equality in India.

"Following the footsteps of Bababsaheb, the Modi government is committed to ensuring the welfare of weaker sections who have been excluded from the development process for decades," he tweeted.

Bhimrao Ambedkar was independent India's first minister of Law and Justice. He is described by many as an "Indian scholar, jurist, economist, politician and social reformer, who inspired the Dalit Buddhist movement and campaigned against social discrimination towards the untouchables, while also supporting the rights of women and labour".