Sanajaoba remarked that it is unfortunate that diploma certificate issued from Jawaharlal Nehru Manipur Dance Academy is not applicable in other institutions even though it was established long ago in 1954. 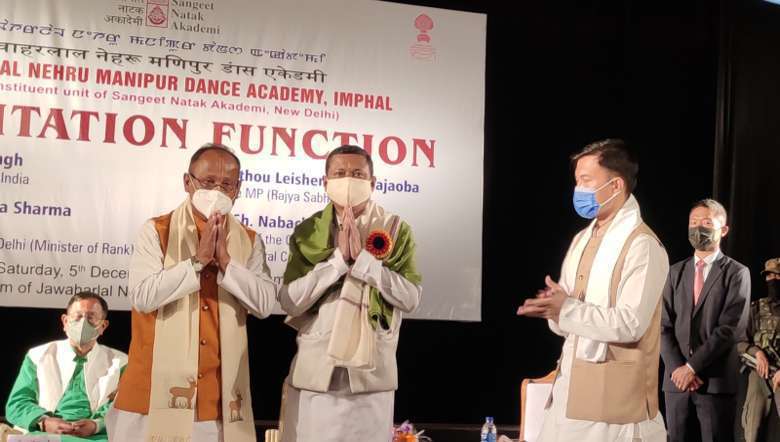 Manipur Rajya Sabha MP Leishemba Sanajaoba on Saturday stated that the Government of India had asked him to submit necessary documents for inclusion of Manipuri as a classical language of India.

Sanajaoba was speaking during the felicitation function of Sh Premananda Sharma on being appointed as officer on special duty, Government of Manipur to New Delhi and Sh Nabachandra Sharma on being nominated as the nominee of the Government of India in the general council of Sangeet Natak Akademi, inner Lok Sabha MP RK Ranjan and himself, the Rajya Sabha MP.

They were felicitated by Jawaharlal Nehru Manipur Dance Academy (JNMDA), Imphal at its auditorium on Saturday.

Addressing the function, Sanajaoba, who is also the titular king of Manipur, said that as an MP of Manipur, he had brought up the matter of recognising Manipuri as a classical language of India. The proposal was made during one Parliament session held during the COVID-19 pandemic. The GoI had responded around 20 days ago and informed to submit necessary documents to prove that it fulfils the essential criteria to get the status of classical language, he said.

Accordingly, a committee comprising officials from the Department of Language, Planning and Implementation and department of Art and Culture has been formed. It is expected that the said committee will expedite the process of sending the necessary documents so that the Manipuri language could occupy the seventh position of getting the status of a classical language, he added.

The MP further urged the state government to submit the documents at the earliest.

Sanajaoba also remarked that it is unfortunate that diploma certificate issued from JNMDA is not applicable in other institutions even though JNMDA was established long ago in 1954 and is one of the pioneer institutes in teaching and promoting performing arts, culture and tradition of states.

“Taking violent action by artists, who are considered as the most decent and highly disciplined people is very unfortunate. As an MP, I will discuss the matter thoroughly with the state government to bring an amicable solution,” he assured.

Lok Sabha MP RK Ranjan stated that JNMDA played a major role in preserving and promoting the rich culture and performing arts of the state.