Surveillance team in Manipur is presently carrying out the survey in 23 villages out of 64 selected villages in four districts. The team have tested 1,518 out of 4,600 targeted samples. 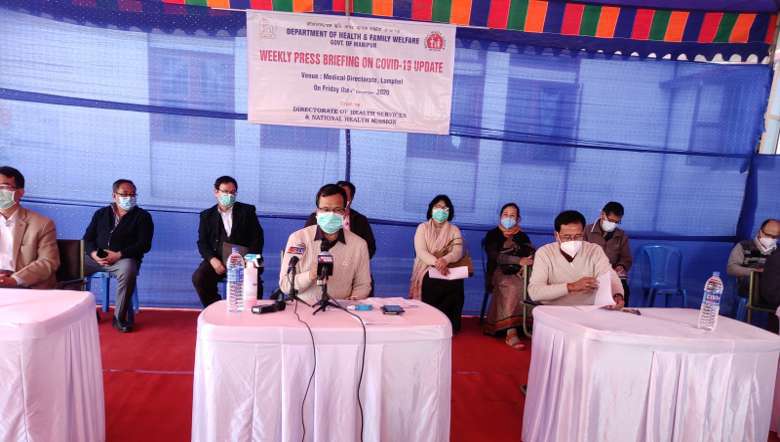 Speaking to the media during the weekly press conference on Friday to update COVID-19 status of the state at directorate of Health Services, Lamphelpat, he appealed to randomly selected households for participating in the serosurveiilance without any hesitation and without fail.

“Support and cooperation from the people is much needed to make the result of the survey accurate as samples are being collected randomly,” he added.

Somorjit said that surveillance team is presently carrying out the survey in 23 villages out of 64 selected villages in four districts of Manipur. However, the team carried out the survey with so much of challenges created out of resistance by selected households. Nevertheless, the team have tested 1,518 out of 4,600 targeted samples, he said adding that among the tested population, 140 are antibody positive.

He further said that the analysis has also been started with the collected sample with the support of Regional Institute of Medical Sciences. Until the completion of survey, it would be bias to declare the outcome, he stated.

Saying that people have a misconception that the survey is not a COVID-19 testing and is not important, the state surveillance officer maintained that the government is going to make new policies for COVID-19 pandemic based on the finding of the surveillance.

He also stated that number of COVID-19 positive cases in the month of September was 4,700, it rose to 7,600 in October and in November, the numbers were reduced to 6,500. To maintain the trend of flattening curve of positive cases, more testing is necessary. However, nowadays people are hesitant to undergo testing and this would bring another major challenge in curbing COVID-19. People should keep in mind that early detection will not only make the patient safe but others as well, he added.

Director, directorate of Health Services, Dr Rajo said that the directorate had carried out some analysis in connection with increasing number of death cases in the past few days. The analysis was based on collected death record from RIMS, Jawaharlal Nehru Institute of Medical Sciences, Raj Medicity and SHIJA Hospital.

He further stated that out of 294 people which died of COVID-19, 290 were co-morbid. The death rate is more in male than female and so far 209 male and 85 female died of COVID-19. It is because there is higher chances of exposure to the virus in men and consumption of illicit items is higher among this group, Rajo said.

According to district wise data, he said that the death rate is highest in Imphal West with 104, Imphal East in second place with 65 cases, Thoubal and Churachandpur with 27 each, Bishnupur district with 17 and Kangpokpi in fifth place with 12.

Rajo stated that the rising death cases is also associated with festivals and frequent marriage ceremonies being held. As the COVID-19 pandemic will sustain for longer period, the only way to prevent from this virus is to learn to live with the virus and maintaining COVID-19 appropriate behaviour, he said.

Noting that Christmas and New Year festival is also approaching, he stressed that people should strictly follow the simple COVID-19 appropriate behaviour to make everyone safe from coronavirus.