Manipur experiences water scarcity due to lack of facilities to harvest rainwater and destruction of catchment areas, as per reports 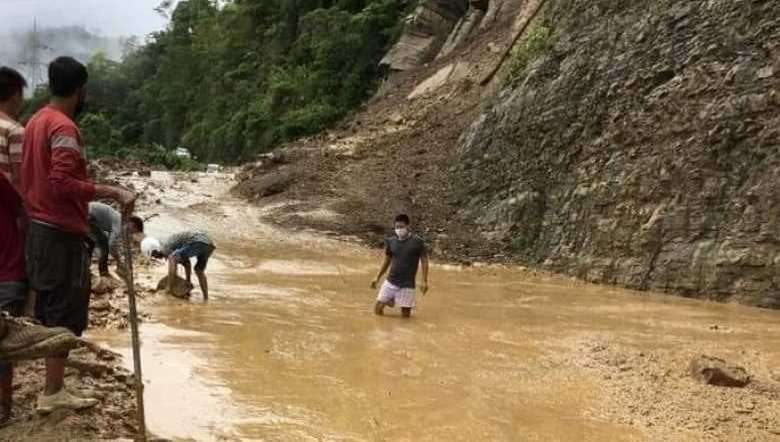 Two news-items on Monday about a dying river in Bishnupur district and a soon-to-be-launched rain-water harvesting project in Mao undoubtedly brings to our attention the problem of water scarcity and efforts to supplement the ever-widening gap between demand and water sources.

Thongjaorok, a small river flowing through Kwasiphai and Khoijuman villages in Bishnupur district of Manipur, is drying up. The river was once a perennial source of water for the people living around the area. But today, the drying of the river is having a devastating effect on the villagers and farmers living in the region. The farmers can no more use the dying river for irrigation of their vegetables and paddy fields and for other purposes. Farmers cite construction of dam, deforestation at catchment areas, and quarrying among others as the main cause for the drying up of the river. Manipur experiences water scarcity due to lack of facilities to harvest rainwater and destruction of catchment areas, as per reports. Manipur has been receiving an annual rainfall of 1,467.5 mm, which is higher than the national average. The problem of water scarcity, however, persists due to lack of facilities for harvesting rainwater and destruction of catchment areas. There are also reports showing that 42 per cent of the natural springs in the hill areas of the state have vanished. On the other hand, the successful launching of Likhuri Rainwater Harvesting scheme under Minor Irrigation Department is going to serve a dual purpose of providing irrigation benefits and drinking water to many villages in the Mao area.

Water covers 70 per cent of our planet, and it is easy to think that it will always be plentiful. However, freshwater, the stuff we drink, bathe in, irrigate our farm fields with, is incredibly rare. Only three per cent of the world’s water is freshwater, and two-thirds of that is tucked away in frozen glaciers or otherwise unavailable for our use. As a result, some 1.1 billion people worldwide lack access to water, and a total of 2.7 billion find water scarce for at least one month of the year. Many of the water systems that keep ecosystems thriving and feed a growing human population have become stressed. Rivers, lakes and aquifers are drying up or becoming too polluted to use. More than half the world’s wetlands have disappeared. Agriculture consumes more water than any other source and wastes much of that through inefficiencies. Climate change is altering patterns of weather and water around the world, causing shortages and droughts in some areas and floods in others. At the current consumption rate, this situation will only get worse. By 2025, two-thirds of the world’s population may face water shortages. And ecosystems around the world will suffer even more.

India is currently facing the biggest water crisis in its history. In fact, it is considered the centre of the global water crisis. The problem is so big, our lives, livelihoods, and futures hang in the balance. And no, it’s not a problem that can be easily resolved by water pumps, a purifier, and retail bottled water. NITI Aayog has described it as “the worst water crisis” in India’s history. The 2018 Composite Water Management Index (CWMI) noted that 6% of economic GDP will be lost by 2050, while water demand will exceed the available supply by 2030. The government is not sleeping on this and has been developing ways to address this growing crisis. Over the past years, it has worked on groundwater recharging projects, micro-irrigation, and legislative changes to promote better water management. Prime Minister Narendra Modi has also announced a plan to provide piped potable water to every rural household by 2024. In the past year, the Jal Jeevan Mission has served 20 million families with clean water.

In the context of Manipur, we need a state-specific comprehensive master-plan for water involving multiple departments so as to evolve an integrated strategy for rejuvenation of springs in the hills, afforestation of catchment areas of the major rivers, widespread rain-water harvesting schemes while regulating pumping of groundwater. The current initiative of groundwater pumping schemes for irrigation purposes by Minor Irrigation Department needs to be reviewed.