Lok Virasat--a festival of documentary films on folk art and painting will be held on November 27-29 with the showcasing of selected films on Indian art and heritage. 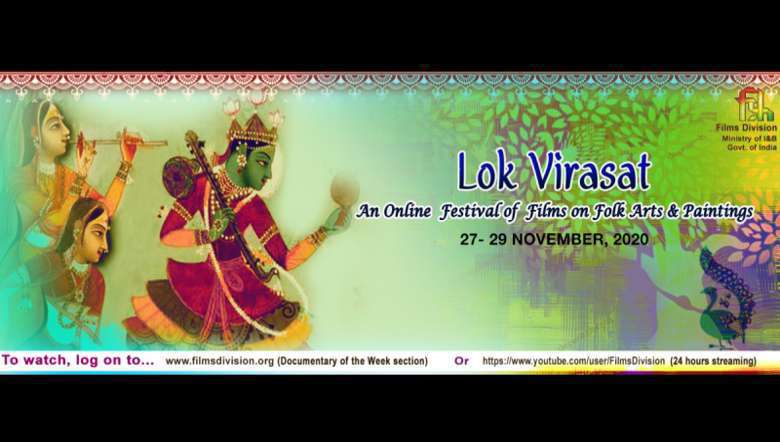 Lok Virasat will begin with Bastar - Rhythm of Progress (15 Mins / 1975 / Chandrashekhar Nair), a film depicting the life of tribals and their folk art which are increasingly getting the urban patronage.

The other films include The Kingdom of God (69 Mins / 1987 / Ranbir Roy), on the great Indian heritage of art and culture with focus on various folk art traditions, Bhavai - Fading Memories (38 Mins /2008 / V Packrirsamy), a film on Bhavai - a folk art of Gujarat, Naman – Khele (26 Mins / 2012 / Ashok Rane), a film on the ancient folk art performed in Ratnagiri, Maharashtra, Sahi Jata, The Fusion Cult (27 Mins / 2012 / Satyendra Mohanty), a film on the unique fusion of muscle and music in the form of folk art on the back-drop of the ancient Orissa town of Puri, Therukoothu : Dancing For Life (35 Mins / 2016 / Jimmy Luke), a film depicting  the age old Tamil folk art, Echoes of the Past (52 Mins / 2016 / Merajur Rahman Baruah), exploring the unique folk art form of Behrupiyas from historical perspective extending to the contemporary state, Folk Paintings of Orissa (9 Mins / 1976 / Bani Doota), a film on the varied and rich folk paintings of Orissa and the dedicated work of folk painters and Kalighat Paintings (16 Mins / 1981 / Punendu Pattrea), presenting a brief history of the unique Kalighat paintings.

The festival will also stream Warli Paintings (17 Mins / 1985 / V.K.Wankhede), a film about the traditional art evolved by the Warli tribals living in the Thane District in Maharashtra, Madhubani Paintings (14 Mins / 1971 / Debabrata Roy), a film on the famous painting of Madhubani, Patachitra (17 Mins / 1980 / Purnendu Pattrea), a film on the art of scroll painting practised by village folks across India, Pichwai (26 Mins / 2012 / Pankaj Rishi Kumar), a film that traces the origin of Nathdwara School of painting.

Lok Virasat is a part of the art-outreach initiative of the Films Division. The documentaries will be streamed simultaneously on www.filmsdivision.org/ Documentary of the Week and https://www.youtube.com/user/FilmsDivision from November 27 to 29, 2020.