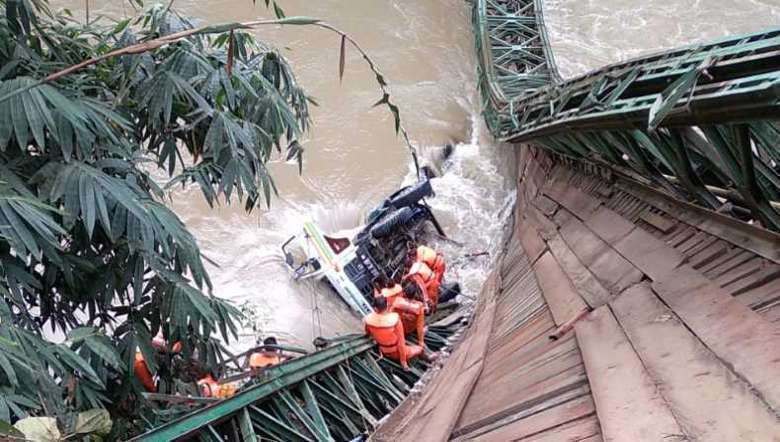 The collapse of the Irang Bridge in Noney district of Manipur on November 1 was caused mainly by overloading of a vehicle. the NHIDCL claimed in its report submitted to the Manipur Human Rights Commission (MHRC) on Friday. The DGP of Manipur also submitted the report on the mishap as directed by the MHRC.

The NHIDCL has stated in its report that the Imphal-Jiribam road was constructed and maintained by the state PWD from 1958 to 1967. Further, development works were not carried out by the state PWD due to problems of logistic support, river crossing and extreme hostile activities in the entire road stretch and the road was later maintained by the Border Road Organisation (BRO).

The old bridge Irang (ch-98+700 km) was constructed by the BRO in the year 2005, the bridge span is 140ft, bridge type is TSR, maximum load-carrying capacity of the bridge is 24 tonne and a cautionary information board was installed at the bridge approach for the guidance to the driver. The National Highway-37 (Imphal-Jiribam road) was handed over to the NHIDCL from 3 km to 221.138km in the year 2017 from BRO for its maintenance and developments. NHIDCL has been doing routine maintenance of the same on a regular basis since the road was taken over from the BRO, the report stated.

The collapse of the Irang bridge on November 1 at around 7:30 am occurred as a heavy loaded 12-tyre tipper vehicle which was carrying the construction materials (sand) weighed 31 tonne, exceeding 24 MT (the capacity of existing Irang bridge) tried to cross the bridge. The main cause of the breakdown of the bridge was the overloaded truck, stated on NHIDCL report.

The report also said that the truck was working under NF Railways department and the tipper was travelling to Dimapur on Imphal-Jiribam road, carrying fully loaded sand. Since it was a rainy day, the sand was fully wet which increased the weight and when it reached Irang bridge, the bridge collapsed. it stated.

On spot observation, the bridge was fully damaged, also more than half of the portion of the damaged bridge submerged in the river and the tipper was also tilted over the bridge.

The report from NHIDCL also mentioned that there are ongoing projects under NF Railways along the NH-37. For which, many trucks or tippers loaded heavily are being used for the transportation of construction materials like sand, steel, boulders, stone etc. Also, heavy machines like cranes, hydras and others are plying on the road.

NHIDCL has taken preventive measures to restore the Irang Bridge for smooth movement of vehicles, and for the time being, its maintenance is done by NHIDCL with 52 Engineer Regiment of Indian Army. It has been decided to use a Bailey bridge which is erected near Tengnoupal Police Station. The raw materials of the Bailey bridge near Tengnoupal PS have been dismantled and transportation of the materials to Irang has started through Bishnupur to Khoupum road via Rengpang. Meanwhile, all the bridge materials have reached Irang village and the work is in progress. The reinstallation of the Irang Bridge will be completed by Friday that is November 13, the report said.

It also mentioned that the DPR for a new RCC bridge has been completed and once it is sanctioned, the RCC bridge work will start immediately, it added.

The report of DGP stated that the possible cause of the accident was suspected to have occurred either due to overloading of the vehicles or negligence of the maintenance of Irang Bailey bridge by NHIDCL.

On enquiry, the owner of the vehicle stated that due to recent landslide and bad road condition of NH-2 (Dimapur-Imphal road), the vehicle was loaded in less capacity from the normal and strongly denied of being overloaded. To support his statement he does not have a challan of the goods as he gave to the driver. And the loaded sand was totally washed away from the vehicle, therefore it cannot be exactly ascertained whether the truck was overloaded or not.

While the charge against NHIDCL for negligence of maintenance of the bridge, it has been ascertained that the bridge has been repaired many times even in the recent past. One project engineer of RK Fortune Developer (a private firm under NHIDCL) stated that he has been engaged four times in repairing works of Irang Bridge during the last four months. Except for minor repair work on the bridge, like replacing planks or welding of some parts of guiders or beams, nothing was done for a long permanent solution.

The engineer also clarified that he had apprised the area manager many times for large scale repairing works. However, there was no positive response from the side of NHIDCL.

Another local was found privately engaged by RK Fortune Developer to look after the bridge as an informer if any damage on unwanted incidents takes place at the site. The system to check the bridge periodically from the side of NHIDCL was also not found. An old signboard put up by BRO allowing vehicles up to a maximum weight of 24 tonne for crossing the bridge is seen near the entrance to the bridge. However, there is no mechanism in place to check the weight of the goods carrying trucks plying on NH-37.

Investigation is in the initial stage and more witnesses are required to be examined in the case to unearth the truth, added the DGP report.

Regarding the missing driver, it is stated that a combined team of Noney police and NDRF/SDRF were engaged in a great effort from November 1 to November 3 to locate the missing driver who was suspected to be stuck inside the vehicle. But the body was not found inside the vehicle on November 4 but found 10 km downstream from the accident area. The dead body was handed over to his elder brother after post mortem, the report said.

MHRC acting chairperson, Khaidem Mani said that proceedings will be held soon, based on the submitted reports for further steps.