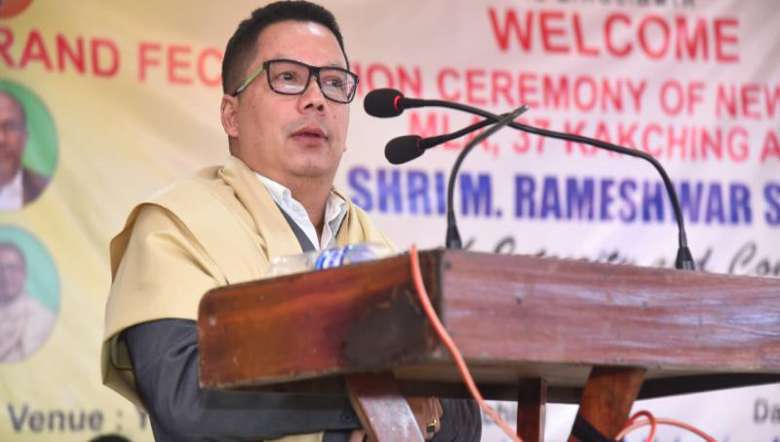 Mayanglambam Rameshwar Singh of the Bharatiya Janata Party (BJP) who was recently declared as new legislator of Kakching AC, administered the oath of office by Manipur Legislative Assembly Speaker Yumnam Khemchand in Imphal on Monday.

The High Court of Manipur on November 5 declared the election result of Kakching MLA Yengkhom Surchandra Singh as null and void and in doing so, duly elected Mayanglambam Rameshwar Singh of the Bharatiya Janata Party (BJP) as the new MLA of Kakching AC.

Speaking to the media on the sidelines of the swearing in function, Rameshwar assured to extend his support and cooperation in any visionary programmes and policies taken up by chief minister, N Biren Singh. And as an MLA of the Kakching, developmental activities will be taken up in his best capacity in consultation with CM, he said.

Rameshwar stated, “Chief Minister N Biren has started various exemplary programmes, policies and mission like ‘Go to Village’, ‘Go to Hill’, ‘School Phagathansi Mission’ among others. Many states want to replicate and adopt this kind of flagship programmes in their respective states. As a new MLA of the state, I will support our leader chief minister wherever possible to make his visionary plan and policies successful.”

When asked about the developmental activities to be taken up in Kakching AC in remaining one and half year tenure of MLA, he assured to serve the people of the constituency at his best level by taking up welfare activities. He also stated that activities will be taken up in collaboration with public and in consultation with chief minister.

Commenting on the verdict of High Court of Manipur that elected him as MLA, he said that it was a “landmark” judgment which shows the power of judiciary in bringing justice and removing corrupt practices in the state and in the country.

“I was really overwhelmed with the judgment of High Court of Manipur. I also expect that similar verdict will prevail in future if people filed similar kind of election petition like I did,” he added.

Chief Minister N Biren Singh who attended the function said that being a coalition government in the state, there was a push and pull in political trend for some days as the number of legislators in ruling party was limited in number. However the situation seems normalised as seat of BJP is increasing, he stated.

He pointed out that BJP’s seat has been increased with the winning of one candidate from Singhat constituency uncontested recently and verdict of High Court of Manipur that elected M Rameshwar Singh of BJP as MLA of Kakching.

Besides, the party has full confidence that all BJP candidates will win in by-election of four constituencies held on November 7, he said and expressed gratefulness to the people for supporting the party.

He also appreciated the order of High Court of Manipur given in connection with election petition filed by Mayanglambam Rameshwar Singh against former MLA Yengkhom Surchandra.