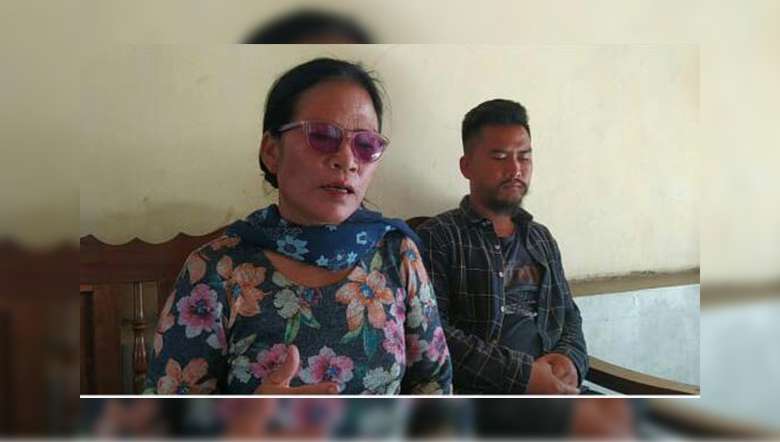 Clash between party workers of the Bharatiya Janata Party (BJP) and the Indian National Party (INC) continued in 51-Saitu Assembly constituency till two days prior to the by-poll.

In a press conference held at Manipur Press Club, Saitu Block Congress Committee alleged that one of the workers along with his wife was physically assaulted by workers of the BJP who are also local club members of Chunungjang Youth Club.

The victim of the incident is identified as Gongsinrei Malangmei, 26 and his wife Lureilu Malangmei of Pongringlong (Charoipandingba) under the jurisdiction of New Keithelmanbi police station. It is alleged that both were physically assaulted by BJP workers on Wednesday at about 9:30 am near his residence.

Narrating the incident, Gongsinrei told media that some people whom he identified as BJP workers and the local blub members of the area stopped him while he was heading for his paddy field on Wednesday at about 9:30 am.

According to him, when he asked the reason, he along with his wife were told that they cannot get out from their houses and they will not be allowed to cast vote for the by-election which is scheduled on Saturday.

He alleged that both he and his wife were physically assaulted by the said BJP workers and was made to forcibly sign on a paper mentioning that he along with his wife will not get out from his house and will not cast vote.

The BJP workers also threatened him that if he failed to follow their instruction then he along with his wife will be killed, he further alleged.

He urged the authority concerned and state government to allow him to cast vote as it is the democratic right for a citizen of the country and to book the persons who were involved in the incident.

Meanwhile, villages chiefs along with their family members of three villages namely Khonglep village, G-Songlung and G-Lhangjol village of Saitu AC have been assaulted by two persons allegedly suspected to be supporters of INC candidate Lamtinthang of the constituency on intervening night of Wednesday on two different occasions.

Speaking to the media at the residence of Khonglep village’s chief, wife of the village chief Helhing Haokip told that at about 11:30 of Wednesday night, two armed persons came and asked for the village chief.

When she told them that he is unwell and fallen asleep, they force her to wake him up. The two persons forcibly asked the village chief to tear down the banner of BJP candidate that read as ‘We support Ngamthang Haokip’, she stated.

When her son tried to stop the two persons from continuing the act, the two armed persons tried to shoot him but due to jamming of their arm, he was safe. The two persons assaulted her son and was injured, alleged Helhing.

She further said that similar incident had occurred on Monday night and the incident of Wednesday is the second time. She urged the authority concerned to provide security for the safety of the family members.

State secretary of BJP Manipur Pradesh, Paokham Haokip strongly condemned the act. He urged the authority concerned and state government to provide security in the three villages till the end of by-election.