Often pushed to the edge, womenfolk of the fishing community of Champu Khangpok floating village take the lead to protect the beautiful Loktak lake that is not merely a scenic recreational spot for tourists and visitors, but is also a living civilisation and a page of history. 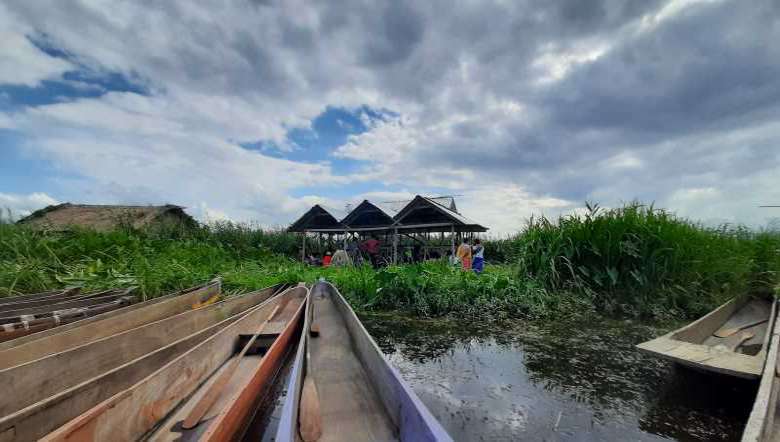 Folklores and legend reveal to us how the Manipur’s Meitei community evolutionary myth is laden with values and traditional knowledge of wetlands and water bodies that contributes to the beautiful landscape features of the state. Stories about the significance of fishing as a routine way of life of the indigenous people depicts how a self-sustained economy was supported by a healthy and rich ecology.

Disturbances in equilibrium of the ecology poses a threat to food sustainability and livelihood of a region everywhere in the world. Manipur’s Loktak is considered as food bowl to the fishing community and villagers in and around the periphery of the lake. This lake forms the domain of food supply chain in the state.

Since time immemorial, floating villages (large floating biomass) and traditional fishing engrained the lake’s description. However, the Manipuri fishing community dwelling in floating phumdis or large biomass has frequently been perceived or misunderstood as a defying community responsible for polluting or destroying the lake’s ecology. They are considered as people who degenerate the environment.

However, these local dwellers in the several floating villages in Loktak lake since past generations are people equipped with the traditional knowledge system of preservation and conservation of their surrounding ecology and their only means of livelihood - fishing. Their survival skills grounded them with practical knowledge of preserving their territorial water and surrounding environment.

Due recognition of indigenous knowledge system’s significance in environment conservation is the current advocacy by the working groups on environment. The original settlers have been the protectors of the eco-system.  And the traditional knowledge of forest conservation has been practiced and handed down to generations. However, in the history of resistance in Loktak Lake, floating hut dwellers have always been depicted as a community responsible for degeneration of ecology in the region.

In the name of the so-called ‘development projects’ and ‘conservation initiatives,’ several forceful attempts were made to wipe out the indigenous dwellers from the surface of the lake water.

Taking serious note of the problem and in the effort to address the pertinent issue, the womenfolk of the Champu Khangpok floating village expressed their view that they have been inhibiting in the middle of the lake in their small floating huts cutting across generations. Every corner of the lake they are acquainted to, every changes they can acknowledge through their life experiences. They honour Loktak Lake as their revered mother goddess, whose blessings made possible to sustain and propagate generations floating in its heart. And they questioned how and why they should be destroying the lake’s ecology, the destruction of it will in turn harm themselves.

Their view of Loktak is not just a water body with mesmerising scenic view, to them the lake is their home, and its surrounding is their world.

According to the womenfolk, everyone knows the reason for the drastic degradation of Loktak’s ecology. They say the installation of 105 MW Ithai Barrage is the root cause. It totally obstructs the natural drainage system, killing it rapidly.  The adverse impact of the Ithai Barrage could be felt in multiple ways. Extinction of indigenous fish varieties, wild wetland based indigenous vegetables, water plants, drastic decreased in numbers and varieties of wild birds, perpetuated degradation of water quality and many more.

The womenfolk of Champu Khangpok assert that in the past decades where natural replenishment was functional,  the lake was clean and pure, draining the unwanted surface away through the natural drains of ‘Khordrak’ and ‘Ungamen’ during rainy seasons. However, the construction of Ithai dam blocked the natural drain outlets, leading to stagnation and decay of water.  The fresh water lake has become like a pond after the installation of the Ithai Barrage, they say.

The womenfolk of the floating village pointed that the National Hydro Power Corporation (NHPC) is the major stakeholder in plundering Loktak’s ecology.

They are of the view that concerned authority has failed to hold back the major responsible stakeholders of destruction. Instead, the marginalised fishing community is constantly being kept tagged as ‘unfriendly/unwise’ community. This negative tag, according to them, is unfortunate and biased treatment.

The installation of the Ithai Barrage, the phenomenal causal factor of misery, is appreciated while the marginalised fishing community is induced into displacement and are facing loss of livelihood.

Rising to the cause – to protect Loktak Lake - the Champu Khangpok womenfolk has thrown a challenging proposal, saying they are ready to take the blame for the degradation of the lake. They demand a test-check parameter of uninstalling Ithai Barrage and enquire into the condition of the lake for few months. In case the proposed move failed to show promising results, they are willing to immediately eliminate their existence from the biggest water body in the state, thereby giving up all resistance to save their only means of livelihood.

Meanwile, womenfolk of Champu Khangpok floating village shared their accounts on their traumatic experience in defending their right to life.

The womenfolk are of the view that since time immemorial, the fishing community have been surviving in the lake with the resources supported by it. There are numerous oral histories regarding hardworking fisherfolk validating as testimonies that Loktak is their domain.

During phases of famines and droughts the old folks narrated to them stories of people collecting ‘heikak’ (water chestnut) to supplement the demand for staple food. Following the footsteps of the ancestors, the present fisherfolk is inheriting the means of livelihood handed down to them through generations. They questioned the intention of the responsible authority in terming them ‘occupiers,’ ‘encroachers’ or ‘illegal encroachers’ How could a habitat that a community has been occupying for centuries suddenly become illegal in a span of few decades, they asserted.

According to them, they remain unaware of the many so-called proposed ‘development projects,’ which are antagonistic to their existence in the lake. Information gathered is only through dedicated working groups. This insensitivity on the part of the concerned planner or authority to inform and consult the original settlers is the issue.

Names of the numerous ‘development projects’ weigh mountains on their heads, as mentioned by them.

They stressed that incidents of burning down floating huts under the Loktak Protection Act 2006, in 2015 and the challenge it has ignited have fostered a pledge in their heart to die in protecting their homes and floating habitat.

One 55-year-old Heishnam Chaoba reminisces how she stood upright to fight back the LDA officials that had come down to evict them while her husband was away attending to urgent matters. When she saw the reckless officials coming down to destroy their small huts, she said she was fully prepared to fight back, whatever it took. She said they were the so called well-educated, well-fed government employees, with politico-economic power. To them, the huts bear no value. However to the fisher’s family their meagre earnings they get from fishing and selling the fish are the support system, including education expenses of the kids. She emphasised that, according to their perspectives, sending their children to private schools and colleges in Imphal is nothing less understood as sending to major cities such as Delhi or Calcutta.

“During many hard times, sending three-four kg rice and dried fish for our children is the only support we could render, every rice bowl paying the price of sweat. Once the floating hut is dismantled, everything will be shattered, our hopes and aspirations. Living for generations in floating huts, we are less educated, so easily marginalised. But why should we allow others to destroy our homes, and this thought made me sit unmoved in front of my hut, ready to challenge whomsoever in my defence to protect my hut from being burnt down,” she said, revisiting the traumatised experiences.

The women community expressed apprehension of constant insecurity regarding possible uprooting of the fisher community from the floating villages in the name of the larger good of the state.

The numerous development projects launched by the state government “targeting their existence” which are always on the pipeline are the point of resistance for the community. To them, despite the voice raised by the community, attempts have been made either to subdue or sideline their voice. However, the spirits of resilience fostered through the frequent struggle of resistance has toughened their spirits to stand upright to protect the Loktak Lake for their right to life.

The beautiful lake is not merely a scenic recreational spot for tourists and visitors, but is a living civilisation and a page of history. The womenfolk expressed their collective pledge to protect Loktak’s ecology, including their floating settlement sites. To them, the protection and ecological conservation of the Loktak Lake is the shared responsibility of villagers that claims survivorship of the community and no bargain should be made to compromise their centuries old settlements.