The fish farmers needs to be made aware of the health hazards of using chemical fertilizers through intensified campaigns. 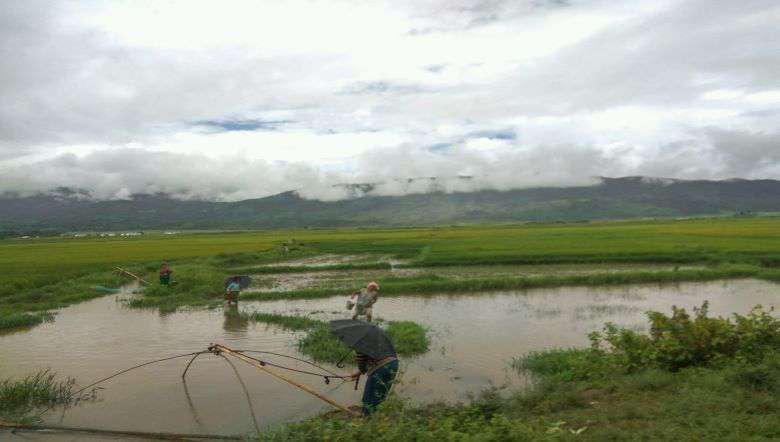 Fisheries Minister S Rajen’s promise to ensure availability of fish at low prices during Ningol Chakouba and step up fish production in the state is indeed a welcome one. The promise goes in line with the Chief Minister N Biren Singh’s promise in June, 2018 that the State would be self-sufficient in fish production by 2020. Annually, the state requirement of fish for consumption is about 52,000 metric tons while only about 32,000 metric tons are being produced by the fish farmers in the State annually. In his push for increasing production, the Chief Minister ordered reclaiming of vast stretches of swamps around the Loktak Lake for different forms of captive breeding of fish through the State Livelihood Mission and opening of fish feed factories to cater to the needs of fish farmers of the state, who have had to buy feed brought from outside the state at a higher price. For this, a plan was also evolved to increase maize and soyabean production in the state for use in the fish feed mills. Maize and soyabean seeds were distributed to the farmers in an effort to provide more income to farmers as well as ensure regular availability of raw material for feed production.

A fish feed factory was set up at an estimated cost of Rs 1.5 crores in the premises of the Fisheries Department complex at Lamphelpat. The fish feed mill run by the state government started production in early 2019 and fish farmers can now buy feeds at the rate of Rs 55 per kg instead of Rs 75. Price of the fish feeds, which contains 24-28 percent protein, would be available at Rs 55 per kg, which is Rs 25 less than the market price of fish feed brought from outside the state. Meanwhile, feeds with 10 per cent protein will be made available at the price of Rs 15 to 20 instead of the rate of Rs 40 per kg. Here, a major disappointment is the quality and durability of the machines installed at the government mill. The new Fisheries Minister Mr Rajen has already ordered an investigation into the installation of low quality fish feed mill. It is rumoured that the machines looks more of the fabricated kind than those of machines supplied by established manufacturing firms. The minister also said that the misuse of funds which was released from the North-East Council for the department during the previous government is under investigation. The minister was also unhappy with the way government run fish farms are being managed. In the light of these factors, the state needs to be more careful in the process of installing another fish feed factory which is being planned in Thanga of Bishnupur district. Fisheries department has been one of the departments least noticed or acknowledged by policy planners in the past. If at all, the minister is serious of reforming the department and the directorate, he must go for a major overhaul and no one even the powerful and connected should be spared in the process of cleaning up the department or he will end up fishing in troubled waters.

Now the question before the Fisheries Minister is how to regulate the fish farmers of the state and also stabilize the price of fish in the market for the benefit of the individual fish farmers. If he is really planning to procure fish from farmers to make it available to the general public during Ningol Chakkouba festival, the government need to fix a Minimum Support Price (MSP) to ensure that the fish farmers get their due. As a part of the plan for increasing fish production in the state, the government support for the local fish farmers was extended last year through loans. A total loan amount of Rs 2.58 crore was distributed to 2035 beneficiaries sanctioned by Manipur State Cooperative Bank (MSCB) Limited under the government’s 3rd credit linkage programme. However, one needs to check the methodology used by many fish farmers in the state to achieve faster growth of fish in their farms. It has been reported that, Urea is widely used in many fish farms which is extremely dangerous to the health of the general public. The fish farmers needs to be made aware of the health hazards of using chemical fertilizers through intensified campaigns.