When the lamp was lighted at Kangla on Mera Hou Chongba 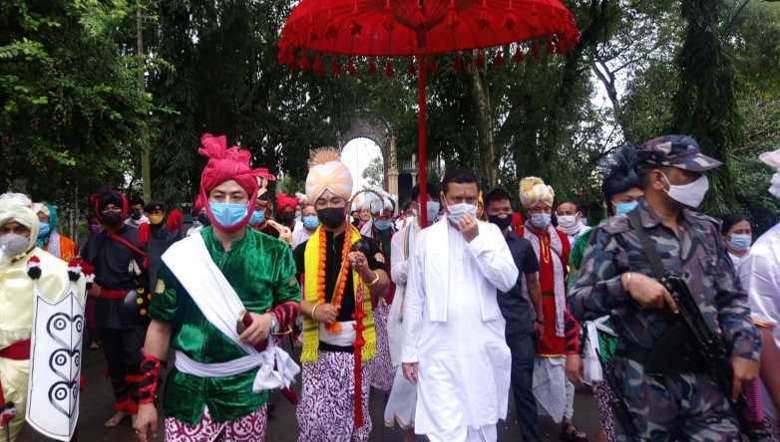 Amid the light rainfall, the lamp was lighted and held high at Kangla which is considered the most sacred place of the then Kangleipak now Manipur, as the cultural festival ‘Mera Hou Chongba’ or ‘Mera wayungba’ ceremony was performed on Saturday.

Titular king of Manipur and Rajya Sabha MP Leishemba Sanajaoba performed the ritual activity of 'Waa yungba' under the guidance of the royal priest inside the Kangla Fort complex early Saturday. A lamp tight to a tall green bamboo pole was lighted and installed at the main cave of Kangla as a part of the ritual to signify safety of the people.

‘Mera Hou Chongba’ or ‘Mera wayungba’is celebrated by various ethnic groups of Manipur both in hills and valleys on the 15th of Mera (Manipuri lunar calendar). The festival signifies the strong bonding of brotherhood among the people of hills and valleys. The lighting of the lamp atop the end of the bamboo signals the safety of the people.

During this festival period, people light lamps in their courtyards every evening. The main function is celebrated at Kangla and Sana Konung (Golden palace) of Manipur. The festival will be observed till 15th of Hiyangei (next month of Mera in Manipuri lunar calendar). .

The function on Saturday started with a procession from the royal palace to Kangla in the morning along with titular king of Manipur Leishemba Sanajaoba. The ritual ceremony, which was organised by royal priest and priestess of Uttra Shanglen, were conducted at the main cave of Kangla and near the cave and under the guidance of the royal priest, Leishamba Sanajaoba lit the lamp and put it atop a bamboo pole.

After the lighting of lamp at Kangla, the ritual programme is continued at Sana Konung.

As a part of the ceremony, Ramji village chief G Ganguilung performed the exchange of gifts among the people of hills and valleys which is followed by Leishemba Sanajaoba to the village chiefs of hills. Later the chief performed the ritual activity of sacrifice of a cock ‘yenkon tamba’ at Sana Konung.

Yenkon tamba is a part of the cultural festival and during this part, the kabui village chief praise the almighty to bring peace and prosperity in the near future.

Leishemba Sanajaoba rued that due to the present situation of COVID-19, some of the village chiefs from different hilly regions were not able to take part in the programme. He wished to celebrate the festival jointly in the next coming year.