The book written by Jiten Yumnam was released on Friday 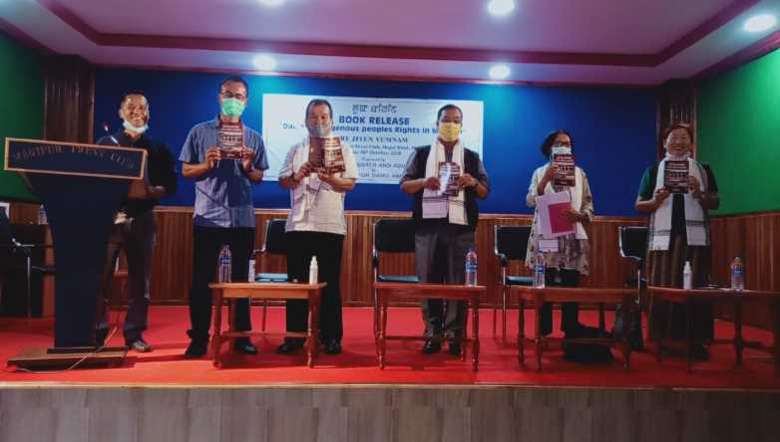 A book entitled Dams and Indigenous People’s Rights in Manipur written by Jiten Yumnam was released in Imphal on Friday.

The release function was organised by the Centre for Research and Advocacy Manipur and Citizen Concern for Dams and Development.

The author of the book Jiten Yumnam said he published his book for the Centre for Research and Advocacy Manipur by dedicating to all striving for the free flow of rivers and protection of land in Manipur.

Speaking at the function, head of department, Economics, Manipur University professor Amar Yumnam said that geography and history move together in any kind of development. “The impact of developmental works done without referring to history and geographical connection is being witnessed since 1972,” he stated.

He stressed that every developmental work should be linked together with cultural context as well as livelihood of the land by referring to history of the land.

Jiten Yumnam, the author and general secretary of CRAM, said that he highlighted two absurd parallel realities that continue to unfold in Manipur in the book; the reports on failure and underperformance of several commissioned mega dams on one hand and concerted and aggressive efforts of the government to construct series of mega dams under the Manipur Hydroelectric Power Policy, 2012 despite the failure and ineffectiveness of dams on the other.

“A serious question remains why the government is wasting public money for such mammoth structures that failed to serve its intended purposes. It only devastates the peoples land, lives and ecology of the state and its indigenous peoples,” he contended.

Jiten also said that there has not been any serious investigation to prove the veracity of such reportages as well as the causes and reasons of the claims by the rights activists and Indigenous peoples regarding the failing nature of the dams and its devastating impact.

“One needs to ponder who benefits out of mega dams, the contractors, the politicians, dam builders, equipment suppliers or whether the people of Manipur really benefit,” he added.

The book also reflects on the increased irrationality of mega dams in the context of global climate crisis and its contradictions in efforts to promote sustainable development.

It is crucial for any newly proposed energy projects or dams to ensure sustainable and equitable development with rightful participation of indigenous communities in all development decision making and seeking alternatives.