The traffic police wing will have 15 police personnel 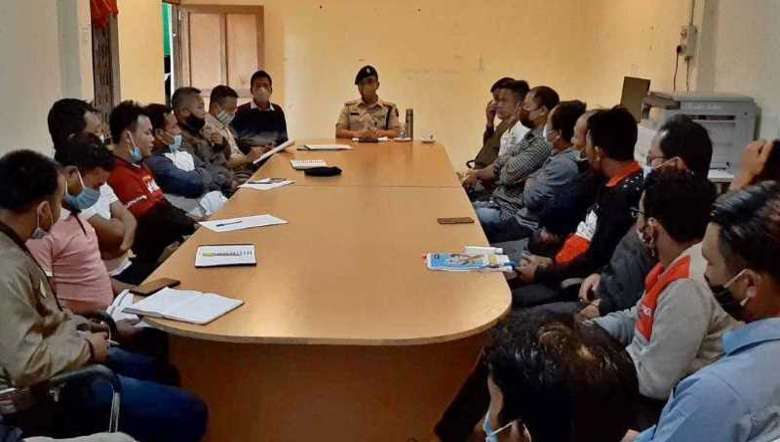 Emphasising on the road safety, a special wing of Traffic Police was set up in Kangpokpi district on Friday during a joint meeting at the conference hall of SP Office Kangpokpi.

The meeting minutely deliberated on the menace of traffic violations and importance of regulations of traffic rule which was strongly emphasised earlier by various CVOs including TSA Sadar Hills.

During the meeting, additional SP (Ops), Lalminlen Misao was made the nodal officer for road safety while the traffic police wing was set up under the supervision of DSP Headquarters, Sony G Sang.

Suspension of licence upon traffic violators, under age driving, drunken drivers with registering of challan upon the traffic violators, to tie up with the chief medical officer for emergency medical services especially during road accident, to approach NHIDCL and BIPL for road safety aid and others were discussed during the meeting.

The traffic police wing shall be equipped with 15 police personnel including two ASI, three head constables, seven police constables and three VDF to be supervised by DSP Headquarters under the additional SP (Ops) as nodal officer.

Speaking to media persons, PG Singsit said that it is very important to be aware that road traffic injuries are an important public health issue. When road safety products are utilised correctly or efficiently, they can help save lives, prevent accidents and injuries, and keep the society functioning in the most optimal way, he added.

He also said that a little carelessness or impatience can lead to serious issues and hence it is better for the public to stick onto the rules without hesitation.

SP of Kangpokpi appealed to the people of the district and CVOs to render maximum cooperation and support towards the initiative by district police on road safety.

A WhatsApp group on road safety was also created through which police personnel and CVOs could exchange information and ideas on road safety.