Chief campaigner of the intended candidate, Jamlet Haokip declared that Chinlunthang is the choice of the tribes. 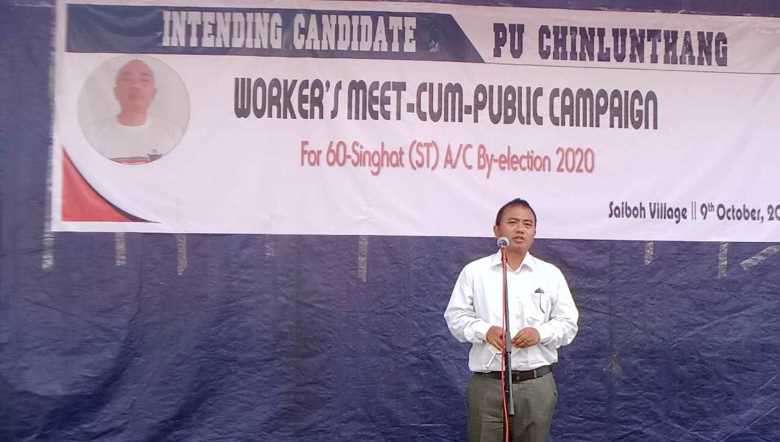 Chinlunthang, one of the strong politicians of Singat assembly constituency, has stood up to contest against former MLA Ginsuanhau Zou in the upcoming by-election to be held on November 7.

Chief campaigner of the intended candidate, Jamlet Haokip declared that Chinlunthang is the choice of the tribes. He said that in the past seven years, previous MLAs had done nothing much for Singat and it is the right time to bring a change. The people of Singat do not get necessary facilities like doctors in dispensaries and the roads are in deplorable condition, he lamented.

“We can have a representative who can get funds directly from the Centre without going after the state government,” said Haokip referring to the state minister who is close with the former MLA.

The chief campaigner continued that with Congress, BJP and any other party, people have almost lost their trust and so Chinlunthang will contest the election as an independent candidate.

Chinlunthang, who had earlier lost to Ginsuanhau Zou in the last election of 2017, said that the programme was organised today to declare his strong intention of contesting the by-election.

“I have a political background from the time of my late father, Thangkhanlal, who was a minister, and as I had already started my political journey by contesting in the last election, there is no going back,” said Chinlunthang.

While indicating that two issues are his major concern, he said that the first being delimitation that is impending. He claimed that as per the proposal of the former MLA, many, including Sangaikot are cut off from Singat AC and the intermixing of different tribes is a threat and people must unite. Secondly, on January 25, the former MLA had divided Zou tribe into two by creating UZO Zomi while a single UZO was in place and this needs to be stopped at any cost, he added.

Chinlunthang also had a dig at the last MLA saying that he kept on changing party at his will. Moreover, the works that he had commissioned are mostly sub-standard like the approximately 25 km long Chura-Sugnu road, which was built at a cost of approximately Rs 47 crore, has been deteriorating after one year or less, he added. The by-election is a ‘chance for redemptions’ for the people of Singat AC particularly the Sangaikot sub-division, said Chinlunthang.