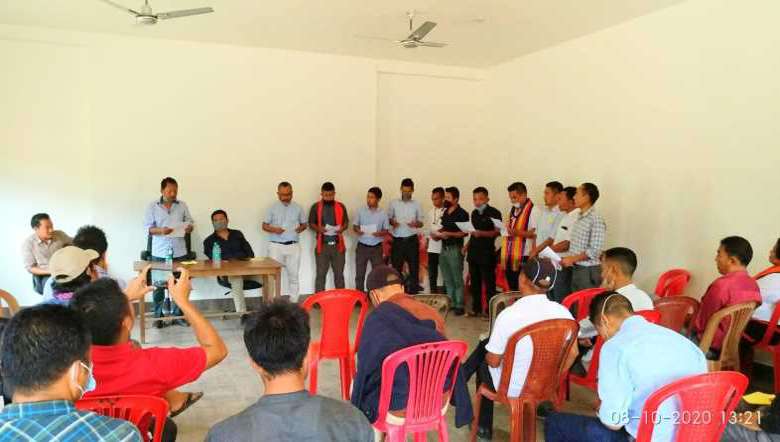 Speaking on the occasion, newly elected president of ANSAM, Wanglar Thiirtung Monsang, on behalf of the new team profoundly acknowledged and appreciated the outgoing ANSAM team for their “selfless sacrificial contributions and the vibrant leadership” that has given to the student body.

“ANSAM is a platform which emphasizes mainly on promoting the welfare of the students and deals in education sector and gives all around progresses to the Nagas”, the new ANSAM chief stated. He maintained that “we should strengthen and promote harmony, unity, integrity and solidarity amongst the Nagas”.

ANSAM will always preserve and enriches the culture, customs and safeguard our common interest. Taking this privilege, Wanglar Thiirtung Monsang urged in particular to all the Naga students, that “we should never forget the past leaders, pioneers for their great selfless sacrifices and valuable contribution towards shaping and defining the destiny of ANSAM”. He added, “It is the right time to come forward and share the concerns to work together as a team unitedly without fear and without reproach”.

While expressing gratitude and appreciation to all the participants, Thotso also conveyed special thanks to the entire community of New Eden Katomei village for their constant support toward ANSAM. The ANSAM general secretary also expressed all sincere gratitude and appreciation to all the leaders of federating units and subordinate bodies for their unflinching support and contribution in the collective journey of ANSAM. “On behalf of ANSAM, I appeal once again to all the stakeholders for resolute supports as we continue our journey to promote the welfare of the students and people and to safeguard our land and identity,” the ANSAM general secretary added.

Also speaking on the occasion, outgoing president Joseph Adani expressed his best wishes to the new team a success in their entire endeavour. He strongly shared the importance of carrying forward the established relationship with various Naga students bodies in different states including Assam, Arunachal, Nagaland state and Eastern Nagaland.  He further exhorted to always execute the work according to the principle and philosophy of the constitution of the Association so that “we achieve our secured future socially and politically”.

The former ANSAM president then stressed on the need to establish a productive and mutual relationship with various neighbouring communities in the state by respecting each other political rights and aspiration. “The Association should give more concerted effort to strengthen the existing education system in the hill areas”, Joseph Adani added.

Paulring Langhu who is also former president of ANSAM exhorted to the leaders to work faithfully and diligently in line with the preamble and directive principles of the Association.

Pung Mark, president of SDSA chaired the programme. J. Kumosha, ‘returning officer of the election commission of ANSAM’ conducted the oath of secrecy for the newly elected ANSAM officials in the presence of all the leaders from federating units, subordinate bodies and and seniors of ANSAM.  Blessing was poured upon the outgoing and new ANSAM officials “by the servant of God”, Thotreivao Zimik, Pastor, New Eden Baptist Church. The leaders of United Naga Council (UNC), Naga Women Union (NWU), NPMHR- South and All Tribal Students’ Union Manipur (ATSUM) also attended the ceremony