The intention of extending ADC terms of office on the pretext of COVID-19 pandemic to meet whims of few individuals is irrational, ATSUM stated. 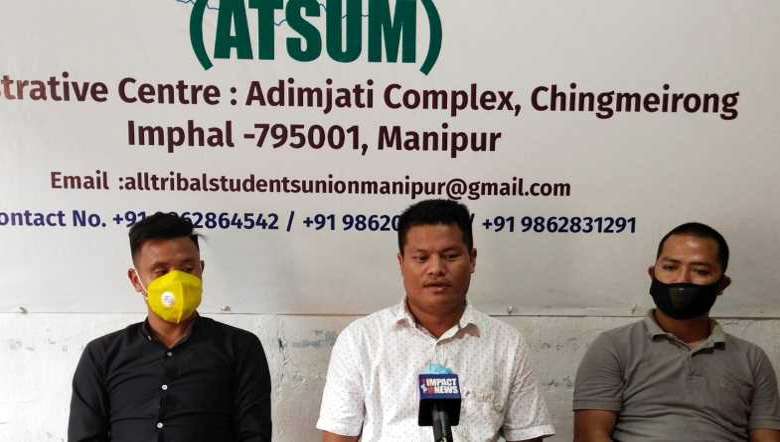 While reiterating the demand for timely conduct of Autonomous District Council Election 2020, a joint meeting of All Tribal Students’ Union Manipur (ATSUM) and its federating units was held on October 7 at ATSUM office, Adimjati Complex, Chingmeirong at 11:30 am to deliberate the impending ADC election impasse.

A release by ATSUM said that after discussion, the meeting has resolved to place the position of ATSUM for opposing further extension of office terms of the incumbent ADCs tenure. The meeting, which was attended by senior leaders of ATSUM, KSO-GHQ, ANSAM and ATSUM federating units or district based students’ organizations, seriously considered that the attempt of four chairmen of Ukhrul ADC, Chandel ADC, Tamenglong ADC and Kangpokpi ADC for extension of another six months as a selfish act and sectional interest, it added.

It further that Section No. 13, second paragraph of the Manipur (Hill Areas) District Councils Act, 1971, explicitly states that “provided that the administrator may, when satisfied that it is necessary in order to avoid administrative difficulty, extend the term of office of all the members by such period not exceeding one year as he/she thinks fit”.

The Hill Areas Committee (HAC) had deliberately misled the public by misinterpreting ‘Rainy Season’ as administrative difficulty and recommended the state government for deferment of election of the six ADCs of hill districts in the state, it added.

Based on the HAC recommendation, the state cabinet without pondering the legality/rationality of the provisions of the Act, had hastily deferred the ADCs election for six months. Subsequently, Tribal Affairs and Hills, Government of Manipur issued an Order for extension of the term of office of all members of the Autonomous District Councils with election to be held in the intervening month of October and November 2020 vide Order No. 7/1/2019 –Hills (ADC/ELEC) dated March 19, 2020, the release stated.

It continued that the state government, in contrast to its official Order No. 7/1/2019 –Hills(ADC/ELEC) dated  March 19, 2020 for conduct of ADC election, is deliberately  hesitating to publish draft electoral rolls of ADCs of each constituency despite intimation from the State Election Commission to do so. The desperate hesitation of the state government is uncalled for, it added.

“The intention of the four chairmen of Ukhrul ADC, Chandel ADC, Tamenglong ADC and Kangpokpi ADC for extension of their office term based on their two given reasons like ‘Harvesting’ and ‘COVID-19’ is improbable because people of the state including the hill populace are directly connected with the agriculture activities throughout the year starting from the beginning of the year till the end. Thus, citing harvesting as a reason for extension of ADC term and interpreting it as administrative difficulty as per the Manipur (Hills) District Council Act 1971 is not acceptable,” said the release.

It also said that the Election Commission of India (ECI) had already announced the date of by-election for some assembly constituencies of Manipur, and for safety conduct of the elections, ECI had also issued broad guidelines to be followed during the conduct of by-election during COVID-19. The intention of extending ADC terms of office on the pretext of COVID-19 pandemic to meet whims of few individuals is irrational, it added.

“The term of office of the incumbent ADCs in the aftermath of the first six months extension expires in November. As decided at a joint meeting of the chairmen of the six Autonomous District Councils Meeting held on July 21, the chairmen of ADC Ukhrul, ADC Chandel, ADC Kangpokpi and ADC Tamenglong urged the state government and HAC to extend the terms of office of all members of ADCs by another six months starting from December 1 till May 31 next year. The move of the six ADCs for extension of another six months is a serious blunder as the reason for their initial extension was that the month of June-July being a rainy season, conducting of ADC is not convenient for all. However, if another six months extension of incumbent ADC terms of office is granted, the next election of ADC will fall in the month of June-July 2021 which will naturally be again a rainy season. Eventually, this will self nullify their previous reasons of extension,” said the release.

The release stated that taking all the facts into account, the members of HAC should wisely take its decision to prevent another blunder mistake and ensure that incumbent ADCs are dissolved and pave ways for summoning of fresh election of ADCs. According to the outcome of HAC sitting and decision on October 8, ATSUM in consultation with its federating units would take further course of action in larger tribal interest, it added.