Disruption in the supply chain system by Covid-19 pandemic restrictions has caused huge loss for farmers in rural Manipur. 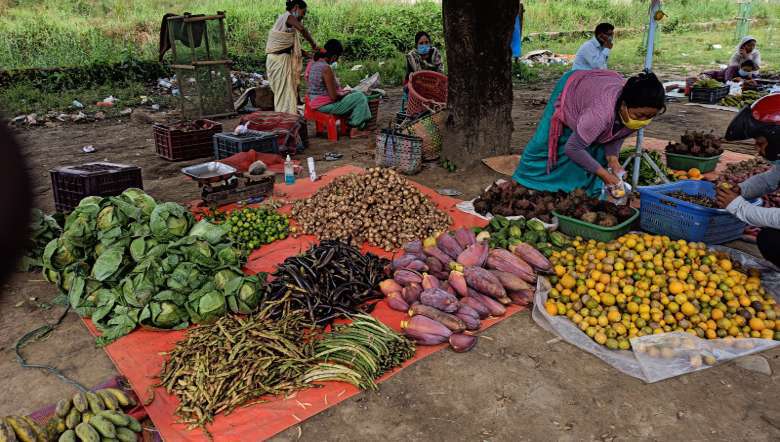 Her courtyard was filled with hundreds of red tomatoes heaped on the ground. They were brought home from her rich vegetable field. But some were already rotten as regular bulk buyers have stopped coming to collect them due to the Covid-19 pandemic restrictions and lack of storage facility. The rotten tomatoes and vegetables will be thrown at the huge dump pit at her farm, said a helpless woman farmer in Manipur valley area as her year-long hard work is rotting away under the pandemic sun. Such is the plight of several poor farmers in the state today.

Although farming activities were permitted as essential service even during the lockdown period, farmers in the agriculture-driven state of Manipur in Northeast India were severely affected owing to the restrictions and disruption in the supply chain system.

Since March 24 when the first Covid-19 case was detected in Manipur, economic activities in the state have been disrupted. Strict lockdown measures adopted by the government in the effort to prevent the spread of the disease stopped farmers in rural areas from continuing their farming activities. The long period of lockdown in the state, nearly six months, brought to a grinding halt all agricultural-related movements like transportation of seedlings, roots, saplings, fertilizers and equipment among others. Consequently, the pandemic has caused major damaging effects on rural livelihood. Although today the Covid lockdown has been lifted, daily wage earners, farmers and micro small business enterprises continue to suffer greatly with no household income or steep fall in income.

In peak season, according to reports, Bishnupur district, mainly Khoijuman village, produced around 20 tonnes of different vegetables per day. Around 500 farmers are engaged in vegetable farming and earned Rs. 10 lakh to 15 lakhs annually during peak season. But this year, due to lockdown, two-thirds of production was wasted. In the face of mounting challenges, instead of counting gains, several farmers have started to count their loss.

“Daily, regular bulk buyers from Imphal would come and collect farm produce such as vegetables, herbs and fruits but this lockdown has stopped all business activities. Anyhow, I have to earn money to run my family. My family depends on me,” said Khagenbam Monita, a farmer in the district, who is now selling her produce from the field to new buyers who came to collect vegetables from her.

“I sold some of my produce to them and earned a meagre amount,” she said.

For the last 15 years, Monita has been farming vegetables like cabbage, tomato, lady-fingers, and varieties of peas and selling them to regular farm produce collectors from Imphal. However, this year, vegetable regular buyers have stopped coming owing to the pandemic preventive measures and restrictions in public movement. Sometimes she takes to the roadside and wait for buyers, she said.

Like Monita, other farmers are also taking to selling vegetables at the roadside in the absence of bulk buyers. However, in the absence of storage facility among the poor farmers, the perishable items are rotting fast. They have no choice but to sell whatever they are left with.

“I am left with pumpkins to sell as brinjals and cabbage were already rotten. At least I could earn Rs 500 a day from selling pumpkins,” said one Yumkhaibam Thoithoibee, a 47-year-old farmer from Kwaksiphai. She also said that “there is no other option other than selling on the roadside.”

Before lockdown, she used to go to Singjamei market to sell the vegetables produced from her farm, she said. But she could not continue to venture out to sell her produce owing to the pandemic situation. As the vegetables are left unsold, they are rotting away, causing huge amount of loss, she added.

“Losses from rotten vegetables are amounting to lakhs. Brinjals and cabbage from the fields are kept stacked up in sacks at the courtyard so that whenever the bulk buyers came it should be ready to be transported. But now they are beginning to rot,” Thoithoibee said.

According to the farmers in the valley, major vegetables bulk buyers are from Imphal who further distribute the vegetables to smaller vendors and street vendors in several parts of the state. However, now the buyers from Imphal and from other places have stopped coming. With no buyers, the vegetables are lying rotten, they say.

A street vendor, Tekcham Achoubi from Lamlongei said Covid safety measures and restrictions have hardened livelihood. She was waiting for Khwairamband Keithel, the biggest market in Imphal, to reopen but there is no sign of reopening in view of the increasing number of COVID-19 patients. Therefore, she started collecting vegetables from the locality and selling them at her village roadside.

“I am a daily earner, without earning how I would run my family. I thought closing schools would not be so bad. But it has been hard on my earnings. Now I am sending my kids for home tuition,” Achoubi said.

Many vendors of Khwairamband Keithel have expressed interest in reopening the market, as they have no other means of livelihood. They have demanded the state government to take measures for reopening the market and prevent the spread of COVID-19 pandemic. They said they are aware of the situation the state is facing, but their livelihood may endanger thousands of people.

It may be noted that nearly 53 per cent of the main workers in Manipur are engaged as cultivators and agricultural labourers and the entire population depends on them for food security. The Gross State Domestic Product (GSDP) of Manipur for 2018-19 at current prices is estimated to be Rs 25, 870 crore growing exponentially at 10.43 per cent annually from Rs 12,915 crore in 2011-12. The primary (equivalent to agriculture), secondary and tertiary sectors contributed 18.11 per cent, 16.23 per cent and 65.66 per cent of GSDP in 2018-19. The share of agriculture has declined over time as the GSDP from agriculture has remained stagnant since 2011-12.

However, another issue is the paralysed supply chains due to restrictions on movement of vehicle and labour movement. Scarcity of essential commodities and food items in far-flung rural and hill areas of Manipur are increasingly felt. Disruptions in the supply chain of farm produce vegetables and in livestock are resulting in loss of farm income and farmers are compelled to resort to distress sale.

According to K Debadutta, director, directorate of horticulture and soil conservation, Manipur, 70 per cent or 14 lakhs farmers are affected out of 20 lakhs farmers in the state. Thousands of farmers across all the districts in the state have been impacted. To provide a helping hand to the farmers, two organic outlets in Imphal under the aegis of Manipur Organic Mission Agency as temporary distribution measures have been opened.

During the pandemic, the state government procured over 3000 metric tonnes of vegetable produce from Bishnupur, Ukhrul, Tamenglong, Pherzawl and Senapati districts. But, 30 per cent of vegetables got spoiled even before it reached the consumers due to the nature of the seasonal products. Some official sources point to lack of proper cold storage for longer preservation of the vegetables produced in the state. It may be pointed out that most of the hill districts have no cold storage facility as yet. And erratic power supply would pose a major problem in setting up much-needed infrastructure and facilities for the rural farmers and their farm produce.

Debadutta said cold chain infrastructure for storage is not adequate. Some amount of procured vegetables and fruits has been donated to homes and orphanages, before it gets rotten. During the pandemic, staff were engaged in studying farm production and helping with marketing facilities. A study on the impact of the pandemic on farmers is being conducted and strategy plans and policy have been implemented by the state government. The strategy plan to address the situation is in being made to be used in the future, he said.

The director said that a more concerning matter is the fear psychosis that is slowly creeping into the minds of the farmers – the fear of losing their farm production amid the pandemic. In view of it, there is an urgent need for creation of awareness on coping with the crisis situation. The farmers need help and support from the public and the government as well.

No doubt, the pandemic has a negative impact on the livelihood of all. However, other than cultivation and farming of crops and livestock, there are no economic activities among the rural poor in the state and there is lower overall rural consumer demand.

Many reports stated that livestock sub-sectors such as poultry, dairy farming, piggery, etc. and agricultural activities were badly affected due to lack of supply of materials, especially concentrated feed for livestock, medicines for livestock, seeds, fertilizers, saplings, and other agriculture-related materials. Scarcity of raw materials has also affected the handloom sector, which also plays a major part of livelihood of the people in rural areas and the second largest employment provider in the state. However, as of now, there is no report of strategic plan, other than agriculture and horticulture sectors, to ascertain the impact of the pandemic on other sectors.