'Manipur has lost many wetlands and the few remaining ones are on the verge of extinction due to immense impact brought on by human activities'. 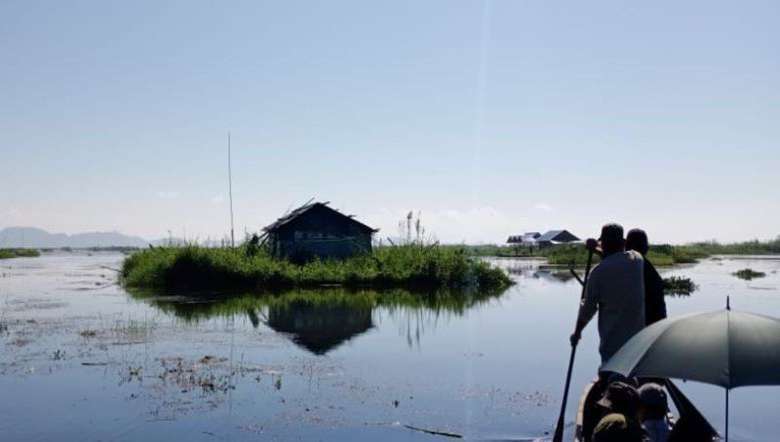 Wetlands in Manipur are fast decreasing in numbers and areas as they are being filled up with the growing demand for land areas in the wake of the ever-increasing population in the state. In view of it, experts have raised serious concern about the extinction of the remaining wetlands, both in the hills and valley, caused not only by climate change but also human activities in the name of rapid development and modernization of the region. They also fear the extinction of wetland dependent species which are important for sustainment of the state’s ecology and biodiversity.

“Manipur has lost many wetlands and the few remaining ones are on the verge of extinction due to immense impact brought on by human activities,” said All Loktak Lake Areas Fishermen’s Union Manipur (ALLAFUM) secretary Oinam Rajen.

In recent years, the state has been witnessing expansion of urban areas with rapid construction activities for residential, commercial purposes and public conveniences all around, fast edging out several wetland areas, big and small.

There were about 500 lakes in the valley of the state in the early 20th century, which number reduced to hardly 55 lakes in the state by 1950s, according to official reports.

As a result of the constantly evolving geo-physical features of the state, today, the number of lakes in the state has fallen to 17 and two ox-bow lakes, according to a recent survey conducted by the Remote Sensing Application Centre (RSAC), Government of Manipur.

The RSAC survey pointed out that the largest numbers of lakes are in Imphal and Thoubal districts. However, there are also a number of smaller lakes which are termed ‘kom’ in local language, which means pit.

The survey also stated that there are about 134 waterlogged marshy and swampy wetlands in different districts. These areas are low lying, situated either in the peripheral area or vicinity of the lakes.

The highest number of water logged areas are recorded in Imphal valley, with 69, followed by 40 in Thoubal district and 21 in Bishnupur district. And, there are two man-made reservoirs, one each in Senapati and Tamenglong districts.

Further, the report states that the lakes in the state are comparatively old with their own distinct characteristic life-span, topographic, physiographic as well as hydrologic features. These features have been closely related to the evolving geo-physical features of the state.

The importance of wetlands or lakes in the state is less known to people and for development purposes many wetlands, especially in the Imphal area have been filled up. It may be mentioned that some areas in Imphal valley like Hicham Yacham Pat, Keishampat, Porompat, Takyelpat and Sangaipat were once lakes in olden days but they have been gradually filled up and eventually have become lands. Other lakes like Kharungpat, Khoidumpat, Pumlenpat, Loukoipat, Sanapat, Yaralpat and Poiroupat are extremely in bad shape in the present days.

In the 1960s, conservation of wetlands were given serious consideration at the global level. In the local context, most of the wetlands dependent species are already endangered and in the brink of extinction today.

Rahul Asem, Project scientist of Directorate of Environment and Climate Change, said that wetlands plays an important role in many ways, ranging from sustainable source of potable drinking water to biological diversity structure. Apart from the sustaining ecosystem, lakes support diverse floral and faunal diversity, local and other migratory birds coming from colder parts of the world, he added.

“Most importantly, animals are attracted to wetlands because they provide food, water, cover, and nesting sites. In short, wetlands provide much faunal diversity with homes. Many species live their entire lives in wetlands and are completely dependent on them for survival. Other species are dependent on wetlands only during a portion of their life cycle,” Rahul said.

The environemntal scientist said that wetlands are an important source of water for domestic and agricultural purposes for the people living in Manipur. Urban wetlands provide numerous goods and services in the surrounding environment. The destruction of urban wetlands has disturbed the ecological services and function as well as livelihoods and wellbeing of the people. Degradation of wetlands also releases a certain amount of greenhouse gases in the atmosphere leading to rise in temperature, precipitation and humidity, he added.

“If narrated more elaborately on freshwater lake, the Loktak Lake is included in the international importance of wetland by Ramsar convention. It plays an important role in the economy of the state. It is also a source of water for hydroelectric generation, irrigation and drinking water supply,” Rajen said.

The pressure for developmental work in the lake has disturbed the natural cycle and indirectly affected the economy of the state, he said.

“The main importance of freshwater lake is that it is the source of livelihood for many fishermen. But the pressure for developmental work in the lake has disturbed the natural cycle and indirectly affected the economy of the state,” Rajen said.

The ALLAFUM secretary continued that construction of Ithai barrage has strongly impacted in degrading Loktak Lake. Moreover, the Loktak Development Authority (LDA) and the state government are targeting the lake for new projects, he added.

“At first LDA conducted illegal eviction of Phumshang. They claimed that the main encroachers are Phumshang people, but actually it is not. The rights of the fishermen have been curtailed in the name of development,” said Rajen.

Development projects in and around the lake has caused several hazards to the natural ecosystem. “Drastic changes have been seen within the Loktak Lake like vanishing of several species, occurrence of flood and endangering of flora and fauna habitats. The ecology of the environment is safe due to the lake. Why disturb the ecosystem, if it has already experienced the impact from disturbing nature?” questioned Rajen.

As per a study, the lake, Zeilad located in hill district of Tamenglong is one of the unique lakes and considered as second largest fresh water after Loktak Lake. The Lake is associated with a number of fishes, pythons and other migratory birds. Large number of tortoises, ducks, cranes and teals are also seen during the arrival of winter months. The lake has a picturesque location atop a hill and has been declared as one of the ‘wildlife sanctuaries’ in Manipur.

And in the valley district, at present, Thoubal has different kinds of lakes, including riparian types of lakes, which in some cases gives spiritual benefits also. Ithai Lake is a kind of riparian type which performs a variety of functions that are valuable to the society, especially the protection and enhancement of water resources, and provision of habitat for plant and animal species. Ikop Lake is another notable example of the cultural, tradition and livelihood of the Thoubal people.

Aongbikhong Lake is one of the beautiful lakes located on the western side of Waithou hills. Besides, varieties of snails, oysters, fishes and other edible insects like naoshek, tharaikokpi and harou are found during the monsoon season. The local bird, Urengkonthou (Moorhen) demonstrates the importance of habitat heterogeneity in lakes richness and abundance, as per records from Rahul.

In spite of the importance of wetlands to local communities, the human pressure on wetlands is expected to be increased with the ever-increasing human population. Strategic actions are needed to put in place for the conservation of wetlands.

The Centre for Research Advocacy (CRA) stressed on the importance of wetlands in sustaining the biodiversity as well as the livelihood of the communities depending on the wetlands.  It expressed concern at the rapid degradation of the wetlands in Manipur due to rapid urbanisation, reclamation for agriculture, impacts of climate change and subjection of wetlands to unsustainable development.

The impact of Loktak Lake has reduced in Pumlenpat wetlands and this has led to loss of endemic fish and other aquatic species unique to the wetlands of the state, alleged CRA. Furthermore, the proposed 1500 MW Tipaimukh Dam will also be submerged and other wetlands in Tamenglong district, it claimed.

Deputy director of the Directorate of Environment and Climate Change, T Brajakumar said that despite the government’s efforts to protect and conserve the wetlands, the numerous lakes in the state are drying up rapidly.

Environmentalists said that vanishing and degradation of the wetlands is due to human pressure and climate change. It is not only Loktak Lake that has to deal with preserving and conserving, others small wetlands are also needed to preserve to maintain and sustain the ecology of the environment. Before it is too late, people from all sectors should join hands and come up with positive solutions.

Also Read How dams are far more damaging than beneficial in …