How dams are far more damaging than beneficial in Manipur

The dams which were constructed in rivers of Manipur have severely affected the livelihood and availability and accessibility of water in Manipur. In the river where the dam is constructed, it affects both upstream and downstream villagers. 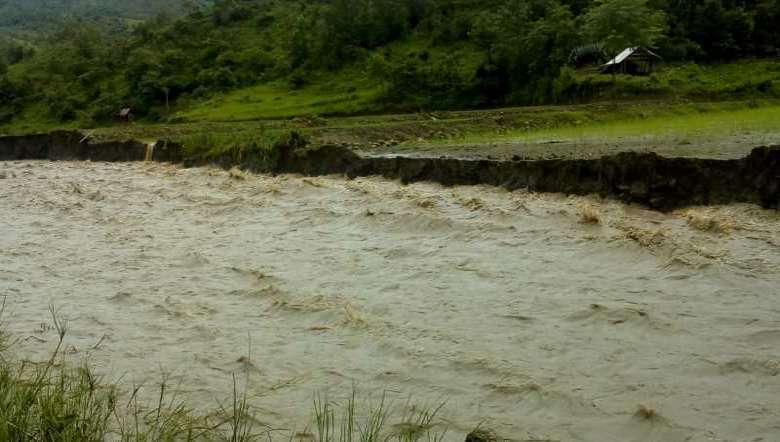 The Maphou dam is located in the Mapithel hill range and is situated on the bank of the Thoubal river.

In an interaction with the Imphal Free Press, Nongdamba said that varieties of local fishes which were caught before the setting up of the dam have now disappeared and many foreign variety of fishes are no more to be seen. Also, the irrigation facility that was dangled to the people was never came through

“It was promised to the people that the dam will provide irrigation facility but where are the facilities now?” he questioned.

Pointing out that good supply of drinking water was also assured to the people with the construction of the dam but people are now buying water from private water suppliers.

During the rainy season, the dam will be opened due to overloading in the upstream area. Because of the sudden release of heavy volume of water, the downstream areas face flood situation. It is not only Mapithel dam, all the dams in Manipur give more or less the same problem to the people, he added.

The construction of Maphou or Thoubal River Valley Multipurpose Project was started in 1970. It is an earthen dam having a dimensions of 66 m high and 107.4 m long. The aim of the project is to utilise water from Thoubal river for irrigation area of 21,860 hectares, flood control, drinking water (10 gallons per day) and electricity (7.5MW), the report of the Irrigation and Flood Control department stated.

Villagers from downstream of the Thoubal dam said that many were displaced. They moved to other areas driven by fear of their land being submerged by the dam water when the reservoir is fully filled. They said that the blocking of the river has disturbed the water flow. Most of the villagers in the downstream who earn living by fishing, collecting sand and stone from the river have lost their livelihoods. The dam has resulted in water scarcity in the downstream side, affecting agriculture and other allied activities.

The irrigation project proved to be a boon for the farmers in Khoupum area when the agricultural yield reached 730 metric tonnes and facilitated double cropping. After the dam got cracked, the canal from the dam for irrigation stopped functioning. In 2019, the villagers appealed to the state government for renovation of the dam, but no action has been taken up, he said.

Remei said the villagers near Khoupum dam are a worried lot today as the dam developed many cracks at many places over the years and if it breaks, the water will submerge and destroy over 1,875 acres of agricultural land and properties worth crores of rupees.

“I am not saying that the dam did not provide irrigation. For four years, canal system was successful but since 1985, it has stopped working. Now the canal system has been lying useless,” said Remei.

If renovated and put into use properly, the project will provide ample water for double cropping and elevate the farmers in the area, said Remei, by pointing out that the water in the dam is fed by streams including Ningshel Lok, Duichung Lok, Luigum Lok and other small streams and springs.

A villager from Tamenglong, Aram Pamei said that the water reservoir spills out during the rainy season causing floods and flash floods in the surrounding areas of the dam. Pointing to the multifold effect of dams on environment, he said that those people who have lost their agricultural land due to dams start clearing forests for jhum cultivation in the catchment areas.

In the upstream area, people still catch some fishes but there is no fish in the downstream valley. The dam may control flood to some extent and reduce the flood prone areas from 200 hectares to 90 hectares but the area under water deficit and fallow land have been increased to 200 hectares with the dam, he added.

N Chanu of Nongmaikhong Awang Leikai said that arable land of about 80,000 hectares was destroyed by water inundation and frequent flash floods after the project of Ithai barrage in 1983. The villagers from downstream areas have been demanding decommissioning of Ithai barrage as there are no benefits of the barrage other than damaging properties.

According to the IFCD report, the construction of Loktak Hydroelectricity project or Ithai barrage was taken up by the ministry of irrigation and power in 1971 and commissioned in 1983. The project aims to generate 105MW of electricity and irrigate 24,000 hectares of land in the Imphal valley besides flood control in Imphal valley.

It has been reported in the news that due to Ithai barrage, Imphal valley is facing flood situation leading to the submergence of more than 30,000 acres of agricultural land. And in Loktak lake, the stagnant water has caused thinning of the Phumdis in Keibul Lamjao area. The dam has blocked the route of migration of many fishes that breed in the lake. This has led to disappearance of several indigenous fishes from Loktak lake.

Rosile Mate, a social activist from Churachandpur said that more than 3,000 people were displaced from their homes due to the construction of Khuga dam. Many hill areas people are increasingly clearing forests as they lost their agricultural lands. Besides, dependency on forest and forest products and firewood cutting is on the rise as people have lost their primary occupation, she said.

She further contended that the dam has put an end to all livelihood activities, submerged their ancestral land and forced them to settle in different locations. Those displaced people faced water scarcity as the dam water is not usable. Today, they are compelled to travel long distances to obtain their basic necessities like drinking water, rice, vegetables, etc.

The failure of Khuga dam indeed results in large scale devastation of the environment besides causing irreparable livelihood. There is no point of a reservoir just for the purpose of storing stagnant water which destroys the environment, she added.

“It is very shocking to hearing that the Khuga dam which intends to generate 1.5 MW and to provide irrigation to 15,000 hectares of agricultural land in Churachandpur districts has long failed to give its benefits,” Roslie lamented.

Yet another issue is Tipaimukh dam that was constructed at Tipaimukh where Tuivai river meets Barak river adjoining Bangaladesh.

It is reported fact that the dam will apparently destroy the ecosystem of the downstream side, including the Barak catchment areas of Assam and neighbouring country Bangladesh.

Dijen said blocking the Iril river which is the main tributary of Imphal river will disturb the present drainage system of the whole Imphal valley. People of both upstream and downstream will be forced to change their lifestyle and livelihood, he said, adding that it will adversely affect the downstream people.

Construction of Singda dam is to supply drinking water to greater Imphal and irrigation water to an area of 4,148 hectares of nearby paddy fields. The construction of the dam was completed in 1995 though it started in 1975.

The farmers of the area lamented over the dam that provides water to agricultural lands in the villages of Kadangbam Lamkhai, Phayeng, Lairenkabi, Sanjenbam, Haorang and Heibongpokpi. The dam has stopped giving water even though water from the canals could reach up to half kilometre distance from the canal’s spillway.

In connection with dam impact on river flow, Centre for Research and Advocacy, Manipur secretary Jiten Yumnam said that several development processes in the state targeted the land and natural resources.

The dams which were constructed in rivers of Manipur have severely affected the livelihood and availability and accessibility of water. In the river where the dam is constructed, it affects both upstream and downstream villagers.

However, the studies on riverbank or catchment area are less in the state. Citing an example, he said that the sand and stone brought down by the river are now deposited in the dam reservoir, rendering the river bed in downstream areas deprived of basic sand to ensure its flow as a river and the sustenance of the agricultural land along its banks. This led to impoverishment of communities depending on the river, he said.

Jiten further stressed that a river’s physical and biological characteristics should not be disturbed. “Natural river flows fluctuate according to the season, often with large spring flows corresponding to spring rains or snowmelt, and low summer flows corresponding to warm, dry summer weather. But the dam dramatically altered the river’s flow regime  by blocking a river’s passage, storing water in both large and small artificial reservoirs, and disrupting the cycles that many aquatic organisms depend upon,” he pointed out.

Environmentalist Salam Rajesh said that while the dams benefit the society, they also cause considerable harm to rivers. Dams prevent fish migration and many migratory fishes found in Manipur are now dropping in numbers and some have disappeared completely.

Deputy director, directorate of environment and climate change, T Brajakumar said that normally, a dam stores water during periods of high flow and releases it in a controlled way to meet a particular purpose; often, to generate power.

The environmental flow is different in rivers of Manipur due to environmental factors. During the rainy season, river water volume is large and flow is high. During the lean season, there is no water in the river of Manipur. It is all because of spring lost in the catchment area due to forest degradation. And it decreases the volume of water in the rivers. The potentiality of reserving water in the dam becomes less and the dam is not released, Brajakumar said.

The deputy director further said that dam water is not released for generating potential. Regular release of river water is required for maintaining e-flow. It is necessary to study recharge and de-charge on the river. Now, the state government along with the align department has started discussion on regular flow of the rivers, he added.

The IFCD has started a project on dam rehabilitation and improvement projects according to environmental and social impact assessment.

In Manipur, the water source from the hill in the form of spring has already started dying due to deforestation and other factors. And again, destroying river flow in the rivers by dams result in degrading of the existing river channels, flood channels, wetlands and strengthening of breached and weak embankments.

Encroachments in the river channels by the locals for commercial agriculture must be stopped and the river channels must be freed from such obstructions. Proper maintenance of these riverbanks is necessary and retaining walls needs to be constructed to reduce the flooding conditions.