An exclusive report by the Imphal Free Press published on August 6, 2020, had highlighted the grievances of the consumers, especially those living in containment zones. 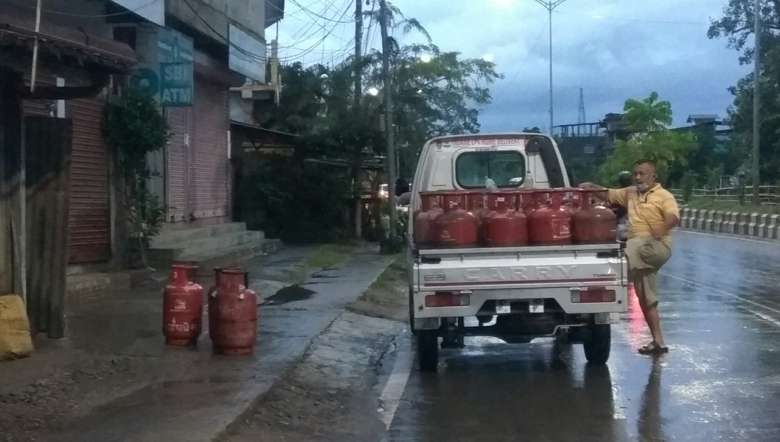 Cooking gas consumers in Imphal Valley, who have been facing difficulty in availing LPG cylinders amid the pandemic situation, have been witnessing a marked improvement in the delivery service under the temporary policy implemented by the state government lately. It is also learned that the tender for piped cooking gas supply is likely to be issued in 2021 as told to the Imphal Free Press by the concerned authority.

In the initial period of the pandemic and the consequent lockdown for nearly six months in the state, the common people faced various problems in availing the service. They were also clueless on where to register their complaints when encountered with problems in the service.

An exclusive report by the Imphal Free Press with the headline ‘Poor cooking gas home delivery service adds to woes of consumers hit by Coronavirus, lockdown’, which was published on August 6, 2020, had highlighted the grievances of the consumers, especially those living in containment zones.

After the report was published, highlighting the grievances faced by the consumers, the Consumers’ Club Manipur had issued a statement, warning that necessary legal action will be taken if the LPG home delivery service agencies failed to solve the issues.

Speaking exclusively to the Imphal Free Press, former member, Manipur Commission for Protection of Child Rights (MCPCR), Keisham Pradipkumar said that the problem of poor LPG home delivery service has been solved to an extent of following up complaints made by him through various mediums.

“For me, the problem has been solved but other people, who lack proper knowledge on how or where to make complaints, might be facing problems regarding issues in the service,” he said.

Although LPG home delivery service is showing improvements, no common helpline numbers are given to the public despite the concerned Consumers Affairs, Food and Public Distribution (CAF and PD) department had earlier mentioned activating the helpline number, contended Pradipkumar.

He said after he made the complaint to local daily and Consumers’ Club Manipur, the gas agency called him up two/three times confirming whether the gas has been delivered. The gas was delivered in the next few days, he added.

Also, during the initial period of the temporary policy of LPG gas home delivery service, the phone numbers of some gas agencies published in local dailies were found non-functional.

Various complaints were also raised from the consumers that when they tried to contact the given phone numbers in the gas news column in the local dailies, most of them were found to be not working or not reachable. At present, the gas news has been updated with precise information and the time of delivery is properly mentioned, they said.

President of Consumers’ Club Manipur, Takhelchangbam Phulchand Sharma told this reporter over the phone that earlier, many complaints were made to the club regarding similar issues on poor LPG home delivery service. Complaints were made especially from the consumers of Mayang Imphal, Kongba, Wangkhei, Ayangpalli and even from the heart of the city, Sagolband, he said.

After considering the complaints made by different consumers, a press statement was issued from the club warning of taking up legal action against the home delivery service agencies if they failed to give valid reason regarding the complaint, said Phulchand.

While saying that the club also conducted a survey for the gas agencies in connection with home delivery service, he said that it was found during the survey that some of the agenices could not meet the service requirements due to some circumstances like lack of transportation, need for repairing of the vehicles among others.

Phulchand further assured that the club will try to solve most of the problems at ground level. But if the agencies failed to give proper explanation or cooperation, then the issue will be bought to the court for necessary legal action, he asserted.

He went on to say that consumers can register complaints to the helpline number of Consumers’ Club Manipur during the office hour, 10 am to 4 pm, round the week at +917629933367. He also appealed the public not to make fake calls and to avoid playing around as people with genuine complaint might be affected.

Director, CAF and PD, Ranjan Yumnam told this daily over the phone that the temporary policy of LPG gas home delivery is likely to continue in the near future after the pandemic.

In the entire state, about 5.6 lakh households have gas connection. The official also said the price of gas depends on the price of world crude petroleum price while the price of cooking gas fluctuate forthnightly.