The All Manipur Hill Districts MGNREGS Employees’ Association said it would intensify agitation from September 25 if the government failed to address the grievances faced by the people in the hills. 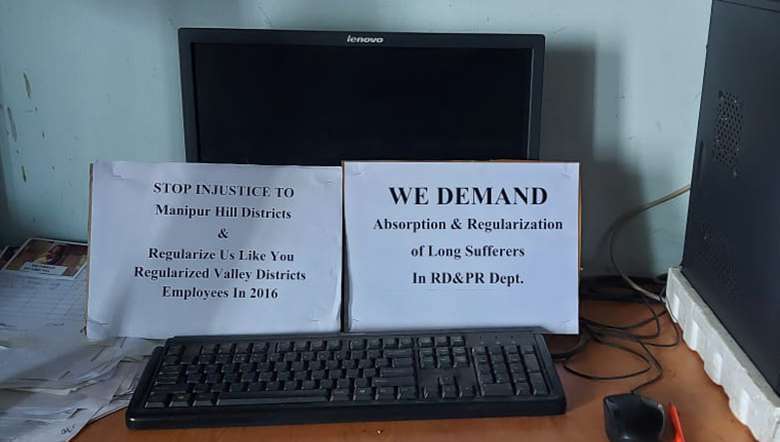 The All Manipur Hill Districts MGNREGS Employees’ Association (AMHDMEA) has reiterated its demand for regularisation of MGNREGS employees of the hill districts and said it would intensify agitation from September 25 if the government failed to respond to the grievances faced by the people in the hills.

MGNREGS employees of five hill districts of Manipur under the banner of All Manipur Hill Districts MGNREGS Employees Association (AMHDMEA) ceased work beginning September 16, saying the state government has failed to meet their demand for regularization of their service. They said the cease work will continue until their demand is fulfilled.

It said that the association has been agitating to bring an amicable solution regarding the grievances of the hills people since September 16.

On August 22, the AMHDMEA had appealed to the state government to regularise the MGNREGS employees of hill districts of Manipur by September 15. Expressing dismay at the delay in the service regularisation of the MGNRES employees in the hills, the association warned of democratic forms of agitations if the state government failed to pay heed to the demands of the association.

The association had stated that the state government should be held responsible for any consequences if the demand of the association were not fulfilled.

The association stated in a release that it has been running from pillar to posts demanding regularisation of service wherein memorandum and representations had also been submitted to the authority, it stated. But there is no concrete solution till date. The grievances of the poor MGNREGS employees (contractual) in remote hill districts remain untold, the release stated.

It further stated that the scheme, MGNREGS was first launched during the UPA government in 2006 by incorporating 100 rural districts of India.

In Manipur, Tamenglong was the first district selected for implementation of MGNREGS in the year 2006. Since then, the district has had 15 staff members working, MGNREGS Dedicated Employees Association president Injiangam Kamei had stated on September 19.

Banners and placards which read "stop injustice to Manipur hill districts", "Regularise us like you regularised valley districts employees in 2006", "MGNREGS staff will shun from work until our demand is fulfilled" and others were used in a sit-in-protest at the conference hall of DC Tamenglong on September 18.

Kamei had stated that cease-work strike by MGNREGS employees of Tamenglong district, demanding regularisation of their service, will affect several job card holders who are supporting the family particularly during COVID-19 pandemic.

Several memorandums had been served to the state government pushing for regularisation of the service but it fell on deaf ears, he added.

"We have no option left except to cease work. We will continue our cease work strike till our demand is fulfilled," Kamei had said on September 19..