CVOs from Churachandpur, YPA, PTC, MPC and VA members of Zehang Lamka have jointly resolved that they will continue to support the JAC to bring justice. 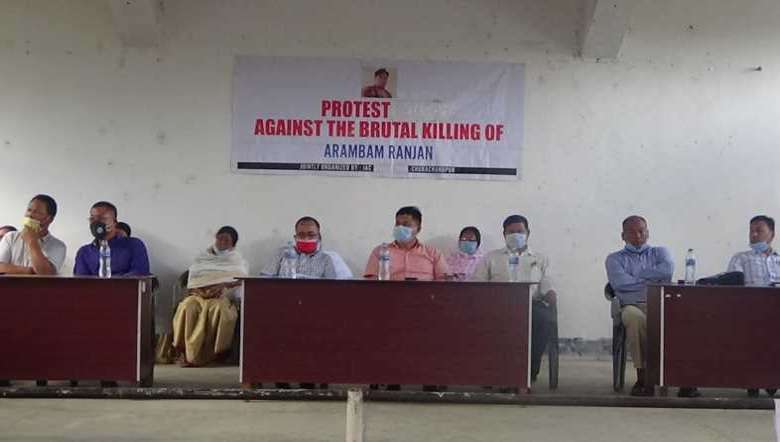 Protest against the brutal killing of Arambam Ranjan of the Writers Safeguard Group continued and this time, it was held at Zougal Hall, Zoveng in Churachandpur district of Manipur on Friday.

Various CVOs from Imphal, including UCM, AMUCO, CCSK, LIPUN, HERICOUN attended the protest organised by the joint action committee (JAC) against the killing. CVOs from Churachandpur, YPA, PTC, MPC and VA members of Zehang Lamka have jointly resolved that they will continue to support the JAC to bring justice.

The JAC has offered Rs 1 lakh to the person who gives information regarding the killing and has been organising a series of peaceful sit-in-protest at different areas of Churacahandpur since September 5. The CVO leaders have expressed dismay and disappointment at the ineffective investigation on the killing of Arambam Ranjan.

President of UCM said that it has been 14 days but still there is no clue to find the culprit of the killing and hence the police department has shown its incompetency. The crime is in fact a well planned act of killing with specific time and place being fixed by a gang, he added.

Other CVO leaders demanded for CBI enquiry on the killing as the police have failed to catch the killers and are seemingly clueless.

Meanwhile, a source from the police said that one suspect namely Huidorom Sanjit Singh, 38, son of (Late) Huidrom Rajen of Laipham Khunou Mayai Leikai, Laipham Siphai, Imphal East under Heingang PS, was found dead in the bathroom of his house last night with foam coming out of his mouth. He had been picked up on September 8 for questioning and released on PR Bond on September 9 by Churachandpur police.

The JAC said that the death body of Arambam Ranjan lying at the morgue of Churachandpur District Hospital will not be claimed nor cremated until the killer is found and arrested.

Convenor of the JAC, Sairem Ibungo stated in a press hand out that the meeting of CVOs on Friday has resolved to stand united and fight for justice with regards to the incident of the brutal killing of Arambam Ranjan and put pressure upon the government and the law enforcing agencies in a more forceful and effective measure so that the culprit(s) be booked at the earliest. It continued that the JAC and various civil voluntary organisations will continue consultation and discussions to find means and ways so as to avail justice to the deceased family in particular and the people in general.