The Tangkhul Mayar Ngala Long (Tangkhul Youth Council) staged a protest at the premise of Ukhrul District Hospital on Saturday. 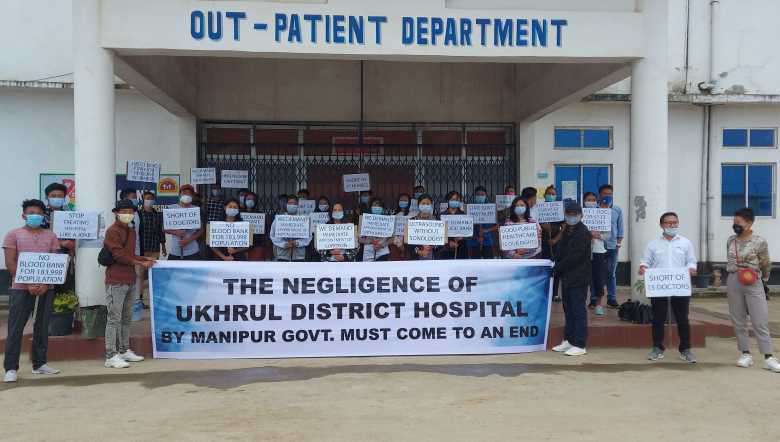 TMNL president Somatai Machinao said, “The People of Ukhrul deserved better health care and the state government must intervene and ensure that the citizens of Ukhrul no longer have to go down to Imphal or private hospital for tests and other medical treatment”.

In this regard, the Tangkhul Youth Council also submitted a memorandum addressed to chief minister N Biren Singh through the deputy commissioner of Ukhrul. The memorandum calls for immediate intervention and action of the state government in the pathetic conditions and facilities of the Ukhrul District Hospital.

The memorandum read, "We, the citizens of Ukhrul under the aegis of the Tangkhul Mayar Ngala Long (Tangkhul Youth Council), come here today to declare that the negligence of the Public Health Care System by the state government must come to an end. We believe that this is a critical issue that needs to be addressed with urgency at this crucial time of COVID-19 pandemic, and that the state government must take responsibility to immediately improve the Ukhrul District Hospital.”

It mentioned that shortage of doctors, nurses, medical equipment and facilities have failed the Ukhrul District Hospital to function as a reliable public health care system and such negligence from the part of the state government has caused various deaths, whether directly and indirectly.

“We are protesting because of our frustration by the persistent negligence and failure of the government to address the degrading public healthcare in Ukhrul, the Ukhrul District Hospital in particular, and herein we demand the following to be considered immediately and put into action,” it added.

The Ukhrul District Hospital is currently a 50-bedded hospital with a capacity of 100 beds. Yet, even with the 50 bedded capacity, it is a shame how the state government has always kept the hospital short of medical equipment and health personnel, it stated.

It continued that in a hospital that is supposed to house 30 doctors at the least (21 Specialist doctors, 9 Medical Officers), the Ukhrul District Hospital has just 15 doctors, i.e. 8 Medical officers and just 7 Specialist doctors.

The memorandum pointed out that manning a district hospital with just 5 specialists, who visit just 4 times in a week (excluding the sonologist and radiographer), the medical officers are overworked.

"We demand that the 50 bedded hospital be fully staffed with 30 doctors; 21 Specialist Doctors, 9 Medical Officers. This will not only improve the healthcare system but will also be convenient for the citizens of Ukhrul, where they can get treated in the town itself without having to travel to Imphal spending thousands and thousands," it declared.

It also demanded that four Specialist Doctors (at the least) be made available at Ukhrul District Hospital i.e. a Medical Specialist, a Surgeon, an Anaesthetist, and Orthopaedics.

It further stated that the hospital also faces a shortage of nursing staff with nurses numbering to just 17 nurses, one Nursing Superintendent and one Sis-in-charge against the 35 nursing staffs that should have been employed.

"We demand the immediate appointment of 16 nursing staff at the Ukhrul District Hospital to ensure that every patient in the hospital is well assisted with and that no staff are overworked," it stated.

It stated that the absence of a basic wing such as a Blood Bank clearly shows the negligence of the state department. For name sake, ECG and Ultrasound equipment are installed but with no one to man the machines, it added.

For frequently required tests such as X-Ray machine where a radiographer is required 24x7, there is only one posted thus, risking the lives of patients in emergency cases, it further stated.

The memorandum stated that in a time when the public healthcare system is supposed to be affordable, patients are forced to travel all the way to Imphal or turn to expensive private hospitals for reasons ranging for basic testing like ultrasound.

There have been uncountable cases where patients have died while on the way because the District Hospital had no medical personnel and/or equipment to treat the patient.

“We demand the immediate construction of a Blood Bank in the Ukhrul District Hospital which will be crucial in administering the needed medical assistance in medical emergency cases,” it stated.

The memorandum was jointly signed by president of TMNL, Somatai Machinao and general secretary, Hubert Lunghar. TMNL has vowed to take up further courses of democratic action if the state government fails to address their demands.