COVID-19 Cremation and Burial: Is the government doing enough on spreading awareness?

The general public at large seems still in the dark about the guidelines provided by the state government for cremation or burial of COVID-19 positive bodies. 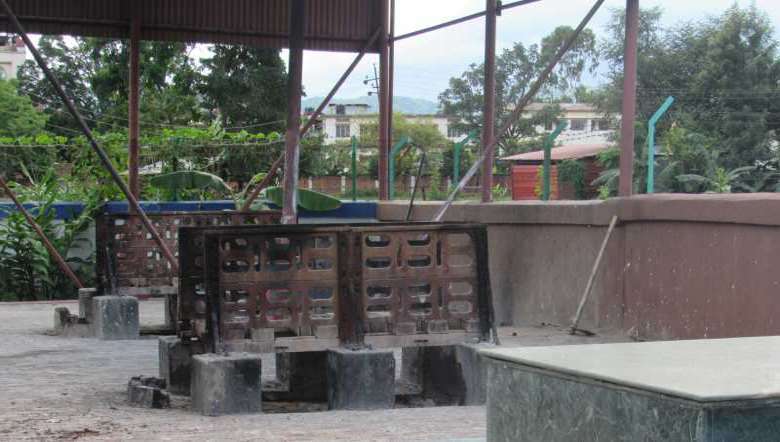 Speaking to the Imphal Free Press, secretary of Chingmeirong Maning Leikai Singlup, Ram Wangkheirakpam, said that due to lack of publicity on the government order regarding cremation and burial of COVID-19 positive bodies, people are left confused about the process to be followed for conducting the last rites.

On August 25, a woman from a locality in Imphal died of COVID-19 and unfortunately, her son was also tested positive for coronavirus, he narrated. The son was admitted at RIMS Covid care centre, Lamphel in Imphal on the same day.  As there were no other family members other than the two, the son requested the government authorities to cremate the body, he added.

For cremation of the deceased COVID-19 patient, a letter was sent using WhatsApp through an official to Imphal East district commissioner for taking the necessary steps. In response, the official asked him to submit a hard copy of the letter during office hours the next day, said Ram.

Following instructions, he went to the office of Imphal East DC and met an official on the following day. When he submitted the letter and enquired about the cremation, the official informed him that the cremation charge would cost Rs 19,000. In response, he said to the official that the deceased belonged to a poor family and her son, who would be taking the responsibility, had tested positive and already been admitted at RIMS COVID care center, Ram narrated.

He enquired the official if there are any provisions to carry the expenses of cremation by the government, but the official told him to meet the district deputy commissioner for more details. When he met the DC, he was told that the clearance was made for cremation of the deceased. The DC further informed him that charges for cremation were waived off, he added.

Ram asserted that the government should provide information to the public regarding the process or guidelines to be followed for cremation of COVID-19 victims.

It may be mentioned that the Government of India, Ministry of Health and Family Welfare directorate general of Health Services (EMR division) has issued COVID-19 guidelines on dead body management on March 15.

Since the first death of a 56-year old man due to COVID-19 infection on July 29 at RIMS was reported, the death count in Manipur due to COVID-19 has reached 29 till 5 pm on September 1.

Meanwhile, the burial of infected bodies at Lei-Ingkhol cemetery by the government has met with objections from Lei-Ingkhol Youth Development Organisation who earlier urged the authorities to make arrangements for an alternative spot.

A press note issued by the organisation mentioned that a patient who had died of COVID-19 was buried at the said cemetery on the night of July 30. The organisation urged the government to shift the burial site as it has caused panic among the locals due to the fear that the infection may spread in the area. The organization, however, stated that they have no objections to burial of bodies which are not COVID-19 infected.

Speaking to the Imphal Free Press over the phone, commissioner of Imphal Municipal Corporation, Kiyam Chandrakumar said that since there has been no government crematorium, the public crematorium located near Minuthong, Imphal East was being utilised by the IMC.

However, a spot has been selected to construct a government crematorium near Baruni foothill, he said. The demarcation of the site for construction was completed on August 21 in the area, he added.

Chandrakumar further said that there is no government fixed rate for the cremation charges. For the unclaimed bodies, the caretaker of the said public crematorium at Minuthong will calculate the charges regarding the essential items used during the process. For the unclaimed bodies, the government cremates the body as per religion of the deceased, he added.

In an interaction with the RIMS medical superintendent, Dr Ch Arunkumar over the phone, he said there are no strict rules and guidelines on the mode of cremation. Patients who died of COVID-19 are cremated by following the religious protocols, he added.

Arunkumar said, as per the guidelines provided by state government, bodies of COVID-19 patients are kept at a morgue. The hospital authority will inform the DCs concerned and superintendent of police of the districts where the deceased hails from, he said. The DCs concerned will take care of the expenses of the entire process starting from ambulance fare to the end of cremation, he added.

As per the guidelines for cremation, only five trained persons with fully equipped PPE suits are allowed to take part in the cremation or the burial. For the burial, the body has to be buried 10 feet deep in the ground instead of 6 feet, he added.

The COVID-19 guidelines on dead body management issued by the government of India mentions that the body would be handled by a trained health professional, who must be wearing full personal protective equipment (PPE). The body should be placed in a leak-proof plastic body bag, the exterior of which can be decontaminated with 1 per cent hypochlorite.

As per the guidelines, the body bag can be wrapped with a mortuary sheet or sheet provided by the family members. Unzipping of the body bag for viewing the face of the dead person is allowed.

Nose and mouth of the body should be plugged to prevent oozing out of any body fluid. But the body cannot be bathed, kissed or hugged. Family members - not in large numbers - are allowed to read religious prayers or sprinkle holy water according to their belief but without touching the body. Embalming of the body is also prohibited. By following the mentioned rules, the body of a COVID-19 patient can be either buried or cremated, as per the guidelines.