An all-weather road is a dream for villagers residing in far-flung areas of Manipur's hill district, Tamenglong. 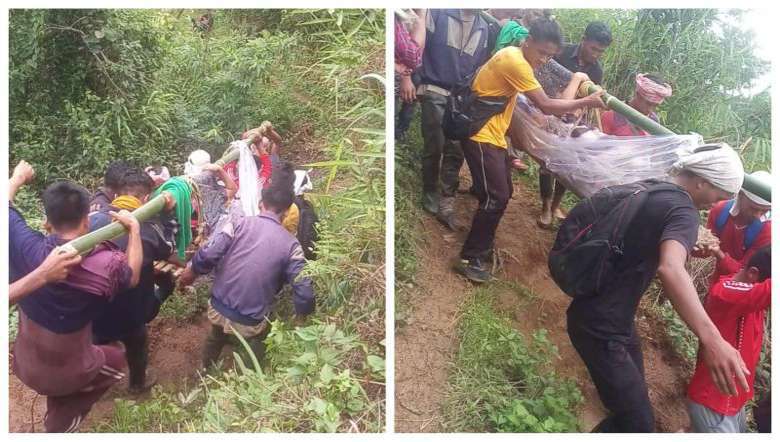 An all-weather road is a dream for villagers residing in far-flung areas of Manipur's hill district, Tamenglong. In the absence of proper road connectivity, around 30 villages under Tamei subdivision in the district continue to suffer and have lost many lives in the rough terrain. Often, these villagers, braving inclement weather, have to travel non-motorable roads for hours, if not a day, on foot to reach the nearest Public Health Centre (PHC) at the sub-divisional headquarter. In the most recent case of threadbare infrastructure in the hills, villagers walked eight hours carrying an expectant woman in a bamboo stretcher to the nearest PHC as there is no motorable road linking the village to it.

"I thought I might not make it till the PHC. The journey seemed to be never ending... as the youths carried me through the narrow-curved road,” said the 24-year-old woman, speaking exclusively to the Imphal Free Press on August 12.

It was on August 10, the woman was carried on a makeshift bamboo stretcher by family members with the help of around 40 village youths over 50 km for the delivery of her child in the hands of medical experts. After about eight hours of walking, they reached Takou from where she was picked up and taken to the PHC at Tamei in a vehicle.

“I was praying and hoping that we reach the PHC as early as possible. I was in severe pain. I was frightened and worried that I might not get to see my child," the woman recalled when contacted by the IFP.

Narating the incident to the Imphal Free Press, Tudibou Chawang, a relative, said that on noting the deteriorating condition of the expectant mother, the family and villagers set up the bamboo stretcher to take her to the nearest PHC at Tamei, about 54 km from Dutnong village.

“We started the journey around 8 am and reached Takou around 4 pm, from where she was picked up by a vehicle and taken to the PHC. Siwang delivered a baby boy on August 11 around 8 am. Both baby and mother are doing well,” an excited Chawang said.

Such cases is common as there is no motorable road linking the village and no ambulances can reach the village till today.

“I have witnessed at least 30 such incidents where the villagers used makeshift bamboo stretchers as ambulances for medical emergencies are unable to reach the area since there is no motorable road,” Chawang told IFP.

Owing to the poor road connectivity, vehicular movement in the area is seasonal. Landslides and floods caused by incessant rains often block the existing roads. The family was fortunate that no untoward incident happened during the perilous journey, he said.

"I appeal to the government and the authorities concerned to have a heart and connect these far-flung areas with an all-weather road. If the area has proper road connectivity our hardship would be decreased to a great extent. Other basic amenities and development will follow suit," Chawang said while expressing his gratitude to the villagers who braved the weather and the COVID-19 risk to take his wife safely to the PHC.

The Imphal Free Press tried contacting Dutnong village chairman Namdisungbou Guangta. He, however, could not be reached.

"The unborn child and the mother would have died if the relatives and villagers failed to bring the expectant mother to the PHC Tamei on time. It was really a difficult delivery for my team.” He said.

Dr Adani said there were complications and risk involved in saving the lives of the mother and child both. But the fear of COVID-19 stopped the family from taking the woman to Imphal.

"We referred the patient to Imphal as there were complications. However, the patient’s family was hesitant to take her to Imphal due to the COVID-19 pandemic, reports of admission denials by hospitals to non-covid patients and financial constraints. Hence, we (both patient's family and the medical team) took the risk and delivered the baby.

"Baby was resuscitated and the mother went into severe hypotension (low blood pressure) which we were able to manage. Thankfully both the mother and the new born are doing fine and were discharged in good health," Dr Adani said.

Dr Adani said that despite the PHC Tamei being poorly connected, as many as 40 deliveries have been done in 2020 alone and most ailments, including scrub typhus, typhoid and hypertension are treated at the PHC without referring to other hospitals. Unfortunately, not everyone survive such a tough and risky journey.

On August 6, 20-year-old Kanpatliu Kamei from Puichi village under Noney district, who was expecting a child, died along with her unborn child after she was allegedly refused admission by five hospitals in Imphal, capital of Manipur.

According to family sources, Kanpatliu, who was then at her maternal home in Senapati was initially brought to the Senapati district hospital. She was later referred to Imphal following a complication. She was taken from one hospital to the other as the hospitals denied admission to her. After being denied medical attention by five hospitals, she succumbed at the entrance of the casualty department of a top private hospital without getting any medical attention. The Manipur government has ordered an inquiry into the incident.

The incident is the tell-tale signs of how remote villages in hill districts of Manipur till today are struggling without basic amenities such as road connectivity, proper healthcare facilities or basic amenities among others.