I have never halted any developmental work in state: Minister Biswajit

The allegations made by four women’s organisations through the media that he halted the construction work of Western gate in Jiribam is baseless and truly unfortunate, he said. 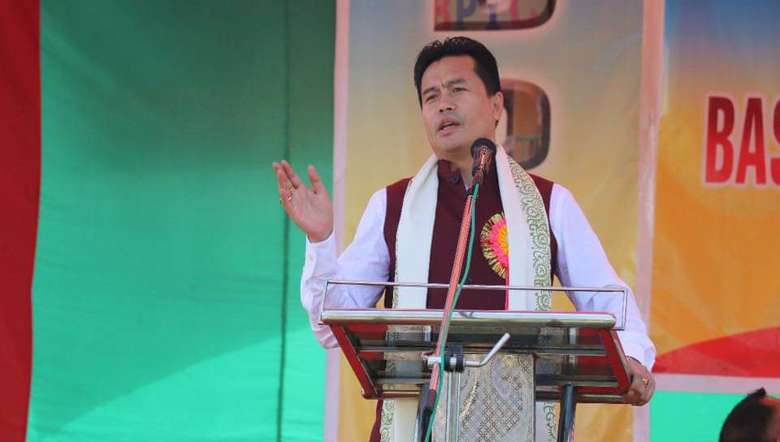 Manipur Works Minister Th Biswajit on Saturday said that he had never put hindrances or halted any works being undertaken for the development of any place in the state.

The allegations made by four women’s organisations through the media that he halted the construction work of Western gate in Jiribam is baseless and truly unfortunate, he said. So far, there has been no instance of him stopping the development work of any section or area, said Biswajit. he said that whenever the developmental work for any area is found to have stopped due to some pending issues, he has given efforts so that work is resumed and speedily completed.

It was truly unfortunate that four meira paibi organisations have come out and alleged that the construction work of the western gate in Jiribam has been halted after it was stopped by the PWD minister, he said.

The public knows what the present state government has done in the field of development for the state in a short term of three years, he further said.

The construction work for the western gate in Jiribam after much deliberation with the chief minister was put under the work programme of the department as it was of utmost necessity. All preparations are made to initiate its tender process, he added.

He further said, “A developmental work cannot be simply launched because we wish it so. The public knows it better. It takes a certain path, has to follow certain guidelines and it may take some time. Also, the arrival of COVID-19 pandemic in the state has made the work take a longer time. There are absolutely no reasons the construction work of western gate should not begin. At present, the technical sanction of the work is processed and the department is working to initiate the tender process. After getting the tender, the work will be assigned to a contractor and it will begin immediately.”

Asserting that the allegations are unfortunate and baseless, the minister questioned under whose orders the construction work for the western gate had started before it was allegedly stopped as per the claims made by the four organisations.

“We believe that some individuals out of their personal interest, may have tried to get the contract work without the approval of the department and the state government. I urge the Meira paibi organisations to become aware of this.”

Raising his suspicion that some people may have misinformed the Meira paibi organisations, he urged not to do such activities. “Jiribam has become a district. Since it has become a district, there is a list of work to be undertaken for providing the required infrastructure of a fully fledged district besides the construction of the western gate,” he assured.

Asserting that it usually takes some time for launching a construction work, he further assured that it will be taken up shortly by the department as per the wishes of the public. He also appealed to stop making attempts to defame the department and the state government.

He further urged the public to become more productive and cooperative instead of making false allegations. Appealing to all including the four organisations to know that the state has not halted in developmental work, he provided his mobile no. Mobile No. 9436892786  to get detailed information, if anybody wishes so.