EXCLUSIVE INTERVIEW: Sons of a farmer, Nongmaithem Parihan Meitei and Nongmaithem Pariton Meitei secured eighth position with the same marks in arts stream in the recently declared results of the examination conducted by the Council of Higher Secondary Education Manipur. 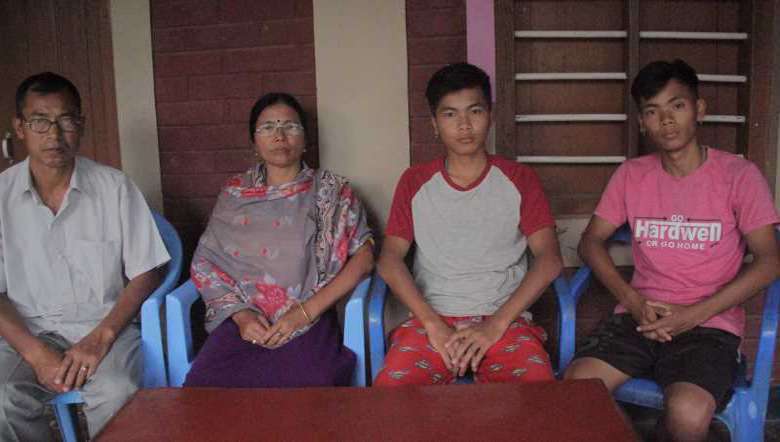 The twin brothers were spraying fertilizers in their paddy field when the COHSEM class-12 examination results were declared on July 17. The photos of two, Nongmaithem Parihan Meitei and Nongmaithem Pariton Meitei of Manipur, holding their exam result sheets while at a paddy field were shared by many in social networking platforms, including Facebook and WhatsApp groups. Sons of a farmer, both secured eighth position with the same marks of 436 each in arts stream in the recently declared results of the examination conducted by the Council of Higher Secondary Education Manipur. The news of the shared success of the two boys went viral and hit headlines.

There were similar instances in the past in examinations conducted by the Board of Secondary Education Manipur and the Council of Higher Secondary Education Manipur wherein two different students secured same marks and stood in the same position. However, the story of Nongmaithem and Nongmaithem Pariton is unique. They are twins born to a farmer, Nongmaithem Khaba Meitei and weaver, Nongmaithem Ibechaobi Meitei from Sekta Awang leikai in Imphal. And, being sons of a farmer, they work in paddy fields to help support the family while pursuing their studies.

In an exclusive interview with Imphal Free Press, Pariton said, "We had to sell rice from the paddy field to pay their tuition fees along with the support from the income generated by our mother through weaving".

It was in the year 2015 that their father underwent heart operation. Since then, they took over the responsibility of looking after the paddy field.

A few months before the examination, the twins stayed in a rented house at Lalamabung to join coaching class for three months. Pariton narrated that they had to wake up early and cook food in order to join the coaching class which used to begin at 5.30 in the morning.

“We were more excited, knowing that we stood in the same position rather than the position we secured. We prepared well and we were hoping that we would be in the top 10 position.”

Informing that they make productive use of bandhs and strikes which is a frequent occurrence in the state, Pariton said, “During bandhs and strikes, we would study the notes given by the teachers and even prepare ourselves for the future chapters before the teacher taught us”.

On being asked whether it is a must for a student to join private coaching classes, Parition said that one advantage of joining a coaching class is that the competition increases among the students since they came from different schools. He also said that they would study together for seven to eight hours in a day, motivate each other and share their ideas and doubts

Pariton said that government schools have qualified teachers and if the government can chalk out means to grasp the attention of students in the schools, the number of students will increase and the performance can also be still better.

The two brothers are planning to pursue higher studies in DM College, Imphal and prepare for UPSC examination in the future.

Father of the twins, Nongmaithem Khaba said that it is like a dream come true for him after seeing the results of his sons. The teachers in their schools had told him that his sons will be a position holder in the examination but he was not expecting it, he said.

Khaba said, “There are instances when my sons would carry their books along while going for a bath in the community pond. When questioned, they would reply that learning even a sentence while walking would benefit them”.

The twins completed class-12 from Emmanuel English Academy, Yaingangpokpi. They began their schooling at Guru Nanak Public School and later joined Eternal Spring English School, Sekta and studied in the school from class six to 10.