The once glorious mountain of Manipur has become a victim of human ignorance today. 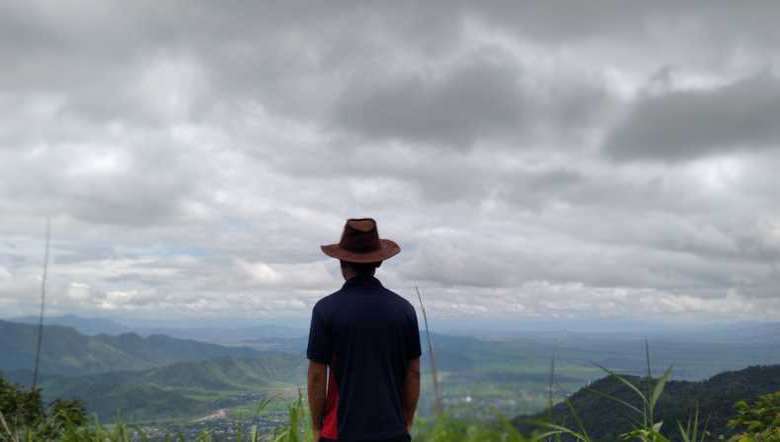 A view of Imphal Valley from the foothills of Mount Koubru (PHOTO: Janghaolun Haokip)

When mountains, once glorious of its rich vegetation, stand and remain depleted, we all know where we are heading towards.

Koubru is one such mountain. As one treks to its peak, most of the vegetation one can find are grasses and bushes; and trees, especially big and tall, have become a rare sight. In addition, one can find small to bigger landslides all along the way to the peak particularly during monsoon. Indeed, the once glorious mountain has but become a victim of human ignorance, and is now therefore but a dying beauty.

It is true that Mount Koubru was glorious. Apart from its rich wildlife, it is also of a great religious and cultural significance to the people of Manipur. According to the Meities, Mount Koubru is the abode of Lainingthou Koubruand other Meitei Manipuri deities. With it, it is also believed to be the most visited pilgrimage sites in Manipur. Meanwhile, it is also stated that it has been the source of livelihood for the Kukis settling in its foothills since the time well before the British conquest of India. On the other hand, the Nagas too also settle in the foothills of the mountain.

Why and how has Mount Koubru come to its ruins?

Certain reasons may be pointed out of how this once glorious beauty has sadly come to meet its dying days:

The foremost reason is the traditional Jhum cultivation. The Kukis called it “Thinglhaang-lei” and is and has been their primary practice for food sustenance, contextually for those settling in its foothills. This practice of Jhumcultivation is also known as slash and burnagriculture, and it involves the cutting and burning of plants in a forest to create a field for cultivation of various crops from food-grains to vegetables. Consequently, due to constant exploitation in a time-span of over more than a century the mountain range has not only become infertile but has also been devoid of trees that once flourished in its ranges.

Apart from it, pollution from plastic waste is another important factor leading to the dying beauty of Mount Koubru. Every year, and all the year round, the mountain has passionate visitors because of its beauty. While there are many who are strictly on a pilgrimage to offer worship, there are also many others who are basically trekking for the joy of adventure. Unfortunately, few of these trekkers often leave behind large amounts of plastics and food wastes scattered along the way and at the peak. These wastes are detrimental to both the plants and the soil as they are non-biodegradable and hence remain as pollutants, polluting both the soil and the beauty of the peak.

The construction of a motorable road is also another factor in the decline in the area of forest land. A construction at such difficult terrain involves higher machinery works that proves adverse in its entirety. While it may facilitate easy trekking, it exploits the virginity of the mountain. Other factors may include cutting trees for firewood and the Kuki’s traditional style of hunting that involves burning large areas of land.

Due to these reasons, the mountain now stands only as a structure completely exploited. The trees that once stood tall with its shadows dark and deep have long vanished in the hands of mankind’s survival instincts. Consequently, as one explores the mountain, one can see that it lies barren, dry and infertile, with bushes as its only vegetation. The decreasing fertility of the soil, on the other hand, had naturally prompted the use of fertilisers which is harmful to both plant and animal life, and more importantly to human health. The land has indeed slowly come to lose its boon and beauty and may become but a source of disaster as large landslides or sudden flooding especially during monsoon.

The soil has become loose without trees to hold it together, and it appears that the land could slide at any moment and cause great amounts of hardships to the people. One may remember the Keithelmanbi incident where a major landslide occurred and caused great havoc to the people and the state. Furthermore, in a few years from now, besides sudden flooding and major landslides, water scarcity except during monsoon may become a crucial issue to tackle. The decreasing quality of air and the variation in weather conditions is also a cause of concern.

Mount Koubru has been devastated and been robbed of its beauty and being. But it has become clearer every day that it cannot stand like this but be restored to its youth and glory. This is because the range not only affects its foothills but the entire state, and otherwise it may cause greater hardships to the people and the administration alike. Afforestation and reforestation are therefore requisites. Besides, efforts and vigilance to revive and safeguard the vegetation has become a must to bring back the mountain to its glory.

Moreover, in order to save the mountain, the mechanisms leading to its devastation must be deliberately checked and addressed. While it is true that the deterioration is primarily due to Jhumming or Thinglhaang-leiby the people settling in its foothills, one cannot entirely blame the people alone. Subsequently, this can also be viewed as an economical drawback of the state in failing to provide means for the livelihood of the people. As such, if the state may provide financial assistance in forms of job opportunities or other forms of skill management, the issue of exploitation may be effectively addressed. It is therefore imperative for concerned societies and individuals to step up to change the course of the future of the mountain.

SGAYO and its benevolent effort

Fortunately, the Saitu Gamphazol Area Youth Organisation (SGAYO), the youth wing of Saitu Gamphazol, an area in the foothills of Mount Koubru, has recently stepped up to stand out and offer  benevolent service to revive and safeguard Mount Koubru. Apart from organising online workshops for the people in the area on the impacts of environmental pollution, and the importance of afforestation and reforestation, the organisation has also conducted field review that may facilitate planning and implementation. The organisation’s objective is to repay what had been provided in several forms by planting saplings and maintaining cleanliness in the foothills to the peak. It is also learnt that the organisation earnestly urges trekkers to be responsible and help the organisation in reviving and safeguarding Mount Koubru.

The degrading Environment and the way forward

It is not only Mount Koubru today, but environmental degradation and pollution has become a concern all throughout the world. It is one of the most crucial issues that have brought the world leaders and intellectuals into several talks and conferences in trying to find a way to cope with the rising environmental issues.

However, the issues have until now remain a far cry. It is therefore all the more imperative for us, as responsible individuals, to contribute as much as we can, towards safeguarding our environment and making possible a sustainable world for our future generations. Because the existence of mankind would be lost as specks in the vastness of the universe if we do not realise now the urgency and necessity to save and conserve our Environment.