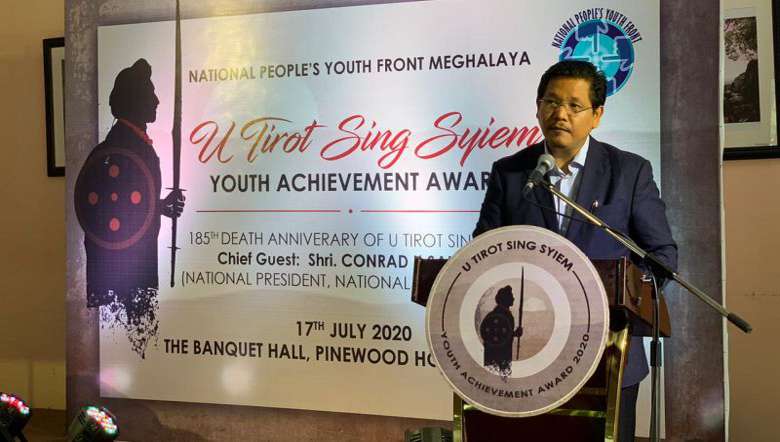 Meghalaya Chief Minister Conrad Sangma on Friday dubbed U Tirot Sing Syiem as one of India’s greatest freedom fighters who resisted the British forces for four years even though he and his men were armed with only native weapons.

“U Tirot Sing Syiem was not only a freedom fighter of Meghalaya but also one of the greatest freedom fighters of India. He and his men fought the British ferociously, using multiple warfare strategies with their native weapons, and put a strong resistance for four years from 1829 to 1833,” Conrad Sangma said while speaking as the chief guest of the ‘U Tirot Sing Syiem Youth Achievement Award’ ceremony which was organised on Friday by the National People’s Youth Front (NPYF).

He also said that the courage and self-sacrifice shown by U Tirot Sing Syiem is something that should be inculcated in every youth of the State.

While congratulating the recipients of the award, Sangma said, “We need to promote and recognize more talented youth as they are the backbone of the nation and our state.”

Announcing an effort on the part of the State government towards empowering the youth, Sangma said that a decision has been made where every 25th post in the government will go to Persons with Disabilities (PWDs).

Meanwhile, Power Minister, James Sangma said, “The world knows little about the great sacrifices made by our heroes to defend, protect and liberate the Khasi and Garo people from the clutches of British imperialism.”

As such he said that the Award ceremony goes a long way in paying tribute to U Tirot Sing, who laid down his life for his land and his people.

Lauding the NPYF for taking such an initiative, James said, “I am familiar with the efforts and work that our Youth Front has accomplished in many areas. For instance, during the lockdown period in April and May, our youth responded to distress messages from citizens of the Northeast who were stranded in other states. Today, as the entire state pays tribute to U Tirot Sing Syiem on his 185th Death Anniversary, the NPYF has once again done a magnificent job in organizing this event to acknowledge and recognize the youths who did their best to contribute to the development of our state and nation.”