Scientists from the Indian Institute of Geomagnetism (IIG), an autonomous institute of the Department of Science & Technology, Government of India, have tracked climate change by following the Paleomonsoonal pattern of the subcontinent by harnessing magnetic mineralogy, a technique that is faster and more accurate than existing methods. 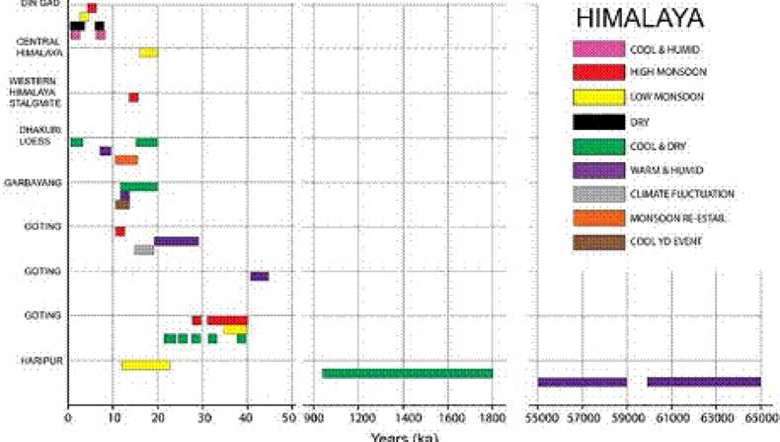 Indian scientists have unraveled a technique using magnetic minerals that can forecast climatic changes faster and more accurately, the Science and Technology Ministry said in a release on Thursday. Till date, clues to climate change in the past are found in fossils, micro-organisms, gases trapped in ice and isotopes, but the laboratory techniques are cumbersome, costly, and time-consuming.

Scientists from the Indian Institute of Geomagnetism (IIG), an autonomous institute of the Department of Science & Technology, Government of India, have tracked climate change by following the Paleomonsoonal pattern of the subcontinent by harnessing magnetic mineralogy, a technique that is faster and more accurate than existing methods, the ministry stated.

Magnetic mineralogy is sensitive to changes in ambient chemical and physical processes that result in concentration, grain size, and mineralogy changes, it added.

In the study published in the Sage Journal, Praveen Gawali and his team of researchers collated and conducted climatic and environmental studies by collecting sediment samples from different environments and climatic domains of India to glean out the information frozen in magnetic minerals in the form of magnetic parameters like magnetic susceptibility, an hysteretic remnant magnetization, saturation induced remnant magnetization, hysteresis loops and curie temperature, the release stated.

Climate-related studies are carried out with the help of several proxies like fossils, microorganisms, gases trapped in ice, isotopes, and many others. They, however, take inordinate time and efforts to segregate from the original material, and the laboratory techniques are cumbersome. Additionally, the material needed for carrying out different measurements is quite vast. The instruments are also very costly, the ministry stated.

The IIG scientists used changes in properties of magnetic minerals for their research in India’s Paleomonsoonal pattern, which is a comparatively new technique applied in India, the ministry stated in the release.

The study of these changes unravels physicochemical regime operative in the past, helping to gauge the then prevalent climate pattern. The magnetic minerals are sensitive to physical and chemical environment that they are embedded in. These external changes bring about modifications in the innate structure of these magnetic minerals, transitioning them from one magnetic phase to another. In this process, the magnetic mineralogy also changes, for example, from magnetite to hematite and vice versa. There are also some intermediate phases that draw the attention of the researchers to complex climatic conditions prevalent over a period of time strictly from these magnetic phases.

Generally, the parent rocks from where the sediments are derived do not contain magnetic minerals that are more than 1% by total volume or weight of those rocks. The concentration of magnetic minerals is very low in sediments. However, this is sufficient to carry out climatic studies since these minerals reveal the true nature of climatic and environmental conditions prevalent at the time of their deposition. Once the instruments are installed in a lab (compared to other instruments, these are quite inexpensive), the overhead and maintenance charges are quite moderate, making the measurements, over the years, quite cheap. Additionally, the time taken is also very less. One of the magnetic parameters of a few hundred samples can be measured in a day. All these factors triggered interest at IIG to carry out climatic studies with the help of magnetic minerals, the release stated.

The mineral magnetic studies have unraveled 4 regional climatic features encompassing the entire Indian subcontinent and 1 localized climatic event. Higher monsoon precipitation in the western part of India between 25-60 ka (thousand years) was shown to be analogous with glacial melt in the Himalayas between 29 and 18 ka. Later, the weakening of monsoon was inferred in the Himalayas, and the hinterland of Arabian sea between 20 and 15 ka, analogically cold, and dry conditions were prevalent at Dhakuri, which led to the formation of loess deposits starting from 20 ka.

According to the study, the monsoon intensification is deciphered in the western and eastern part of India between 13 and 10 ka with major implications in the hinterlands of the Arabian Sea and Bay of Bengal. Between 4 and 2.5 ka, Holocene aridity and weakened monsoon was inferred to be prevalent across the subcontinent. The localized feature of Younger Dryas cooling seems to be confined to just the upper reaches of the Himalaya.

Climate is changing at a rapid pace, impacted by natural and anthropogenic activity. The research will help forecast climatic changes with more accuracy and speed, the ministry stated.

The ministry also said that the forecast of this change has to be accurate and high levels of accuracy can be achieved if we go very far back in time. Thus the present study by IIG with the help of sediments and the accuracy with which the magnetic minerals freeze the environmental and climate conditions will help to screen many different domains in a much faster speed and with high levels of accuracy.

Climatic changes seen across the Himalayan region reveal episodes of monsoonal fluctuations and temperature changes (depiction of temporal changes not to scale), according to the study.