Sanitation workers in Manipur have not been paid their monthly salaries since the month of April, they say. 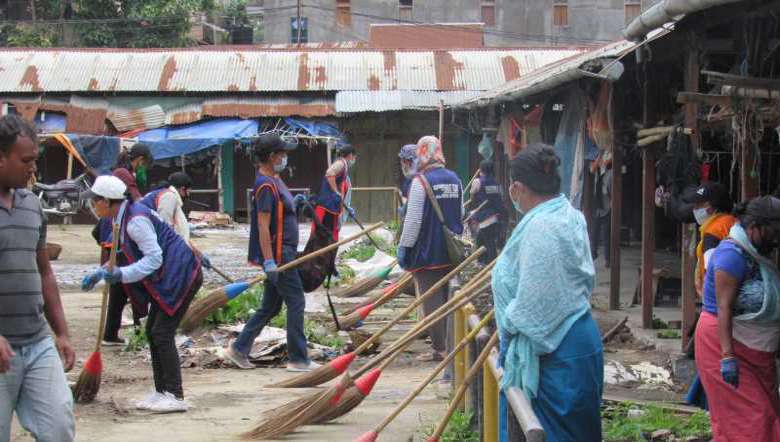 Among the frontline warriors fighting the prevailing COVID-19 pandemic, sanitation workers and sweepers in Manipur have been performing their duties as unsung heroes by putting their health and that of their families at risk despite not being paid their salaries for months amid the lockdown situation.

As sanitation work comes under essential services during this pandemic time, sweepers and sanitation workers have been continuing their normal services to ensure cleanliness and help check the spread of all kinds of infections at public places and households. They go cleaning and collecting garbage from market places to households daily from dawn to dusk braving several inconveniences and threats to their survival.

Using only these two preventive kits, they have been performing their cleaning and waste collection activities daily from 6.30 am to 3 pm.

The workers also face the problem of lack of social security. Apart from financial woes and health risks, they usually face rampant stigma and discrimination even during normal situation, which increased during this Covid-19 time.

One of the garbage collectors in an interaction with Imphal Free Press said that sanitation workers are the mainstay of the waste management system in this rapid urbanisation period. But instead of recognising their service as one of the essential services, people usually consider it as an undignified job and stigmatise them. “My own locality didn’t even allow me to enter the village…  This has made me stay far from my house and now am staying with some of my colleagues near Rup Mahal Tank,” Ratan said (name changed).

Despite their hard work and untiring service to the people and the state as a whole, the workers have not been paid their meagre salary of Rs.6000 per month since April till date. However, considering the importance of the role of sanitary workers during this outbreak, the workers continued their duties.

Gripped by fear and worries of survival, Ratan picked up the courage to continue his service to serve the public with the focus on “society first”.

“I have to collect only general waste not biomedical waste but in this critical period I have to engage in collecting filthy, smelly and rotten substances throughout the day. People who are in a clean and safe environment have the fear, why wouldn’t we,” he said.

A lady sweeper Thambal (name changed) said that commuting is one of the major hurdles while delivering her sweeping duties in Khwairamband Ima Market. But she manages to render her service without taking any leave.

“I usually work around market sites. We face a direct risk of getting infection while handling contaminated waste as many quarantine centres have set up near bazaar. As we are taking that much of risk the authority concerned should at least give our salary on time even if they don’t want to give respect like other frontline warriors,” Thambal said.

When the Imphal Free Press contacted the Committee of Imphal Municipal Corporation Solid Waste Management (CISM), one of the members, Waikhom Ananda Meitei said that sweeping and cleaning and garbage collection in 27 wards under the Imphal Municipal Corporation (IMC) are being mainly done by 18 NGOs. Some of the NGOs are either affiliated under the IMC or recognised by the department of the Municipal Administration, Housing and Urban Development (MAHUD), he added.

Workers Union of Manipur (WUM) president Ananda said that all the NGOs are facing similar kinds of problems. But they are facilitating the service nonstop even during COVID-19 spread. WUM is one of the NGOs that provides garbage collection service and recognised by MAHUD,

Ananda stated that according to the government order, the waste collection system should be “one household one card system”. But practically it failed and was converted into “one gate one card”. In actual, every household has to pay Rs 150 per month but they are now collecting Rs 150 per gate.

But due to economic problems in the wake of COVID-19 outbreak, many households are not even paying the monthly waste collection fees regularly; he said, adding that this has created a lot of challenges in paying salary to workers.

Ananda said the daily wages of a waste collector is Rs 200 per day. Of this amount, Rs. 122.10 is to be funded by the government. The authority concerned didn’t sanction this money in time. Even during this COVID pandemic, the money is still not released.

“Keeping the surrounding environment clean is one of the most essential steps to prevent the Coronavirus outbreak. Therefore, admitting the importance of sanitation workers and sweepers, they should at least sanction the salary for COVID period to encourage them,” he stated.

The Workers Union of Manipur president also said that owing to various factors such irregularity of salary, fear of COVID-19, increase of social stigma and discrimination, many workers have quit their jobs. Only few dedicated workers are taking the risk of cleaning the Imphal city and continuing as unsung heroes.

While appealing to people of the state and authority concerned, he said that it is high time to acknowledge the service given by sanitation workers like they give importance to vacating their dirty and filthy place.

According to the data received from Imphal Municipal Corporation (IMC), excluding labourers and sweepers of IMC, 140 labourers, 297 sweepers and 48 drivers that belong to different NGOs are taking up the cleaning and waste collection activities in 27 wards under the IMC. These workers collect waste from around 70-75 per cent households in Imphal Valley through the year.