The contest is declared open on July 12, coinciding the birthday of Pablo Neruda who is one of the greatest poets of the 20th century, stated a release. 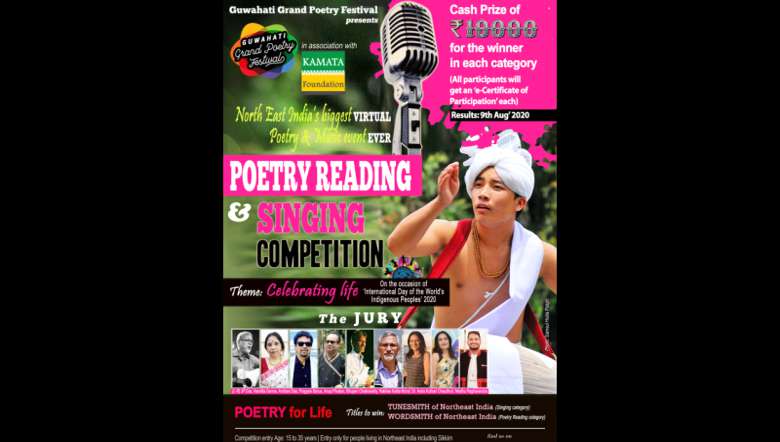 The Guwahati Grand Poetry Festival Forum has stated that it is organising the region’s biggest ever virtual Poetry Reading and Singing contest from Sunday onwards.

The contest is declared open on July 12, coinciding the birthday of Pablo Neruda who is one of the greatest poets of the 20th century, stated a release. Open for young people between the age group of 15 to 35 years with the theme ‘Celebrating Life’, the contest will be active from Sunday to August 5, it said. The results of the contest will be announced on August 9 on occasion of ‘International Day of the World’s Indigenous Peoples’, a day chosen in recognition of the first meeting of the UN Working Group on Indigenous Populations held in Geneva in 1982, it stated.

Guwahati Grand Poetry Festival Forum has decided to observe this important day by declaring the results of its poetry reading and singing competition, the release stated. The contest is an attempt to celebrate the grand occasion, significant in respect of Northeast India and its indigenous populations and keeping in mind the depressive environment prevailing due to the COVID-19 pandemic, which has greatly affected people, especially the younger generations, it added.

The winners of the contest will be awarded with Rs 10,000 in cash each along with a certificate and all participants will get an e-certificate of participation after the contest, the release said.

Guwahati Grand Poetry Festival forum has engaged a group of eminent people and artistes as Jury members for selecting the winners, it said.

Guwahati Grand Poetry Festival is Northeast India’s first and only of its kind poetry, literature and art forum founded in 2018 in association with Kamata Foundation, a charitable foundation formed for research and study on the indigenous cultures of NE India, it added.