Scuffles between inmates and the frontline workers, including the district police have occurred when COVID-19 positive inmates are to be shifted to a Covid Care Centre or hospital from IGNTU-RCM Makhan, Presidency College Motbung and Motbung Govt High School institutional quarantine centres. 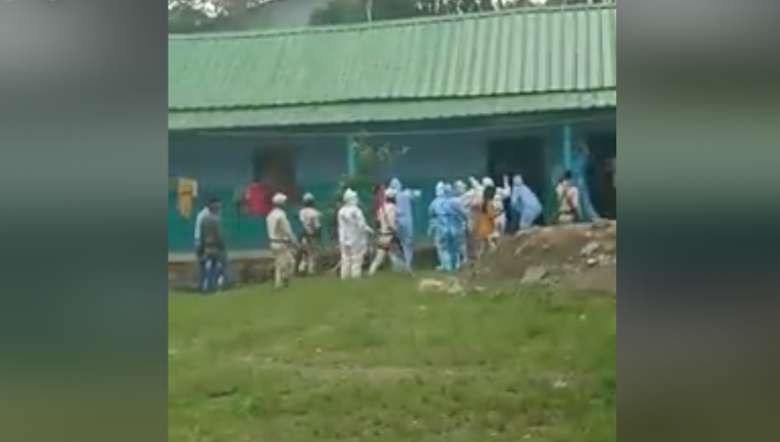 Kangpokpi women police and the frontline workers of the district administration went into another violent scuffle with the “arrogant” inmates of the institutional quarantine centre at Motbung Government High School on Sunday.

Scuffles between inmates and the frontline workers including the district police have occurred when COVID-19 positive inmates are to be shifted to a Covid Care Centre or hospital from IGNTU-RCM Makhan, Presidency College Motbung and Motbung Govt. High School institutional quarantine centres.

The District police and frontline workers always had a hard time on every such occasion in shifting the COVID-19 positive inmates, as they have to donned in full PPEs and enter the quarantine centre to confront or try to control the alleged arrogant inmates.

Ultimately, 'Danda for Tamasha' (a beating for those creating troubles) has become the best remedy for the district police to resolve such scuffles and incidents which have become a frequent occurrence at such quarantine centres.

In today's incident, the women police personnel of Kangpokpi were compelled to beat up some of the female inmates at Motbung Government High School Institutional Quarantine Centre as they allegedly obstructed the frontline workers from performing their official duty in bringing out six COVID-19 positive inmates from the centre.

“It was when I instructed the women police to beat them and bring out the positive inmates,” the magistrate said while adding, “We have been politely appealing and requesting them to allow us to take the positive inmates since morning till afternoon but they failed to listen to our humble requests”. Instead of cooperating, they first resorted to violence, he said.

He also said that the six positive inmates were ready to cooperate with the frontline workers but few of the arrogant women seized their luggage and restricted them from coming out. The women police personnel and other frontline workers had to intervene and took them out from the centre, he added.

He also said that the inmates made a demand for giving an early date for conducting retest. According to the medical protocol, the date is not permissible as retests could be done only five days after the identification of the positive inmates at the centre, he informed.

The inmates raised a complaint that despite staying at the quarantine centre for more than 50 days, the positive cases have been detected one after another and they could not be discharged from the centre.

There are currently 60 women inmates at Motbung Govt. High School after shifting the six positive inmates today. The positive inmates need to wait five more days for retest while the more than 70 male inmates including four couples at Presidency College Motbung were all found negative and they are likely to be discharged by Monday.

Magistrate Opendro Singh also said, not all the inmates were arrogant or difficult to handle; some are sensible and understanding but few of them are completely intolerable. They are the ones who create such ‘tamasha; giving headaches to the frontline workers including the district administration, police and health workers, he added.

It was also reported that the inmates at Motbung Government High School while previously staying at IGNTU-RCM Makhan, were mingling with one another by completely violating the quarantine norms and guidelines. It is suspected that it may be the main factor behind unending positive cases among them.

The magistrate also appealed to the public not to be misled by the viral video in which only the police action towards the arrogant women inmates were shown.

The public should also know that the female inmates started the violence by hitting the women police personnel and frontline workers with firewood, he said. While informing that the evidence is with him, he clarified that they are compelled to resort to take some disciplinary action to control the arrogant inmates and segregate the positive one from them.