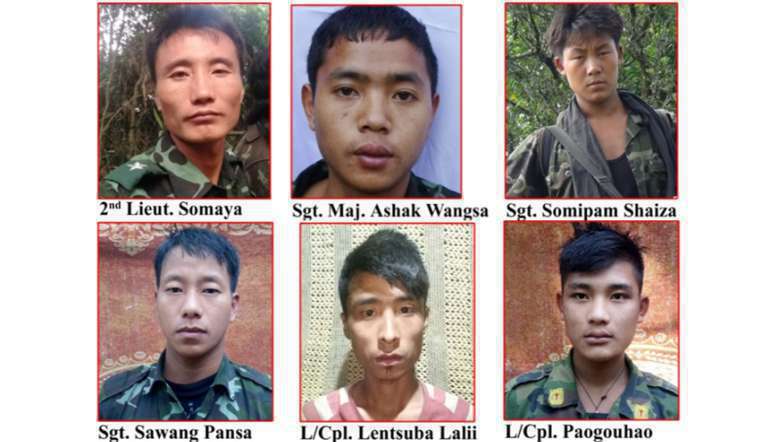 The six Naga Army personnel gunned down by the Indian security forces on July 11, 2020

The NSCN (I-M) has stated that July 11 will go down in the history when the combined forces of Assam Rifles (AR), Indian Army and Arunachal Pradesh state police made Nginu in Longding district, Arunachal Pradesh (Wancho Region under Nagalim) as a killing field when six “Naga Army personnel” were gunned down in cold blooded manner “on the fabricated ground that they were planning to execute mischievous mission as claimed by the DGP of AP police”.

“It was a well planned and coordinated act of terrorism by the Indian Security Forces (ISF) personnel. The Naga brave hearts were caught by surprise at the break of the day, overpowered from all sides. Giving them no chance to position themselves, they died fighting to the last man standing,” it said.

Not satisfied with the killing, the ISF personnel crossed all decency as they displayed sadistic pleasure in exposing the mutilated bodies and shoving them like dead animals, the release said. In the battle fields, even the enemy shows respect to fallen soldiers, it added.

This is the brazen manner of the Indian government in dealing with the NSCN (I-M) which is in a ceasefire agreement running more than twenty three (23) years, it said. This is the repeat of another state sponsored terrorism against the ceasefire party, it further said. This is the work of India, the world largest democracy which wanted to make Naga Ceasefire as the killing field to force its will on the Naga people,” it added.

Longding district in Arunachal Pradesh inhabited by the Nagas is not far from the Indo-China border where India is having border dispute, the release said adding there is reportedly a heavy concentration of Chinese PLA soldiers in the disputed area. After the Galwan incident in June where more than twenty (20) Indian Army personnel were killed by the Chinese PLA, this Longding killing of six Naga Army personnel by the ISF personnel may be understood to send the message across that Indian Army will not tolerate any forces who dare to come too close for comfort, it said.

“It is, however, outrageous for Indian security forces to vent their frustration at their humiliating encounter with Chinese PLA by targeting the Naga Army,” it added.

The signing of August 3, 2015 Framework Agreement was a milestone in the Naga political talks, it said. But the irony is when the Indian government reneged. This is the crux of the Indo-Naga political talks which has remained in doldrums, it added.

“In today’s highly sensitive world it is difficult to imagine a ceasefire signed for the purpose of negotiating for an honourable political solution and military suppression going on side by side. Significantly, this is the manner of the government of India in dealing with the Nagas,” the release said.

NSCN is being driven to the wall after repeated provocation and aggression, it said. The goodwill spirit of ceasefire has been stamped to the ground, it further said adding the ceasefire has lost its meaning.

Today, Nagas in general and NSCN (I-M) in particular mourn the death of the six sons of the soil who have made supreme sacrifices, it said. “We stand up for them with revolutionary salute. The precious lives of these promising young men have been cut short in their primetime but they have indeed gained martyrdom in this cruel death,” it added.

They have made the ultimate sacrifices at the altar of freedom and their names have been recorded in the annals of Naga’s struggle for independence, it said. The Naga Army will ever remember them and honour them with victory because their sacrifices will not go in vain, it added.