Roadways in Tamenglong under deplorable conditions due to heavy rainfall

Not only are the people finding it difficult to walk on the roads, several vehicles have also broken down due to the bad road condition in Tamenglong district headquarters. 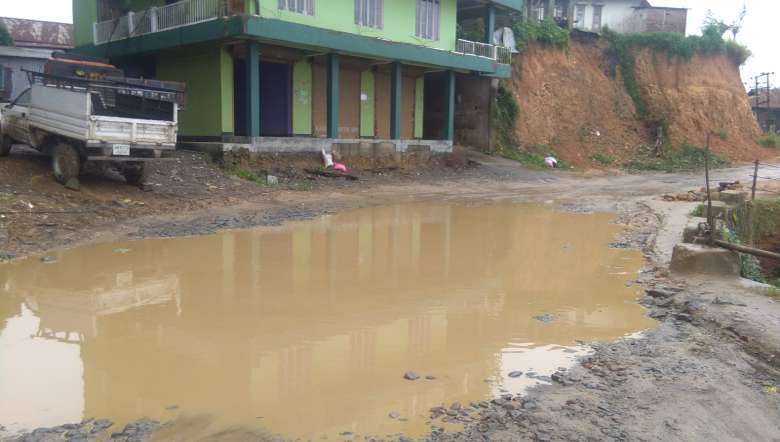 A pool of water in Tamenglong district headquarters (PHOTO: IFP)

Incessant rainfall in the last couple of weeks has damaged roadways in Tamenglong, leaving them under deplorable conditions even at the heart of the district. Not only are the people finding it difficult to walk on the roads, several vehicles have also broken down due to the bad road condition in Tamenglong district headquarters.

As the inclement weather has thrown life out of gear, the people of Tamenglong district have sought the intervention of the authorities concerned to urgently repair the damaged road.

The Joint Forum for Transport Welfare Association Tamenglong has also appealed to the authority concerned and the contractors to repair the damaged road at the earliest.

Forum secretary Joseph Daimai said that the stretch from zero point towards Duigailong village of Tamenglong to Khongsang Shivalaya, which falls under the double-lane highway project remains slushy and unusable. But the company which is engaged in the double lane construction work has not repaired the road till date.

Daimai appealed to the contractor concerned to repair the damaged road where people are finding it difficult to pass through.

Meanwhile, concerned citizens including locals, truck drivers, ambulance drivers, and officials on duty for different departments and COVID-19 along with citizens passing through the stretch everyday have raised questions over the non-development of the roads which are the lifeline of the people.

The bazaar road in front of Rani Gaidinliu Woman market to the medical gate area has turned muddy and filled with pool of water.

This section of the road has been kept under prolonged negligence and many have expressed resentment over the pathetic conditions of the town road and about the deplorable conditions of Tamenglong-Khongsang road.

Tamenglong recieves heavy rainfall during rainy season and it rains almost throughout the year, often causing heavy landslides and flood condition on the roads.