As of now, State Bank of India, Punjab National Bank, UCO Bank and Manipur State Cooperative Bank are the banks that have been catering services to the needs of people in Ukhrul district. 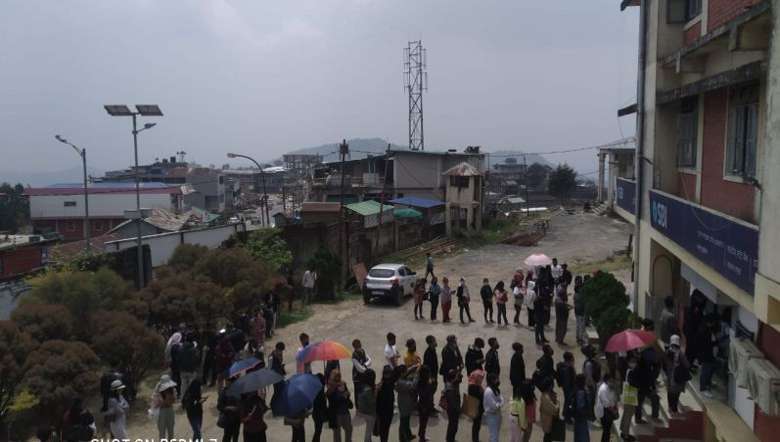 Better banking facility has been one of the long pending demands for Ukhrul district which is home to approximately two lakh people but no action has been initiated to address the issue yet.

With no immediate plans for improvement in the pipeline concerning the poor banking facilities in Manipur's Ukhrul district, resentment and dissatisfaction towards authorities by its residents have increased over the years.

Due to limited bank branches and sub-branches in Ukhrul district, villagers of the district have been compelled to frequent the district headquarters but many would return home with disappointment.

One C Horam who is a resident of Ukhrul town told the Imphal Free Press that he is not satisfied with the services being provided by the banks in Ukhrul as he is made to stand in long queues every day.

“Standing in queues at certain occasions can be accepted but this is not the case here. We are made to stand outside in line almost every day. One has to stand prepared like the old saying, ‘early bird catches its prey.’ Even this is not translated into reality as the bank is operated on a time schedule. By the time our turn comes to enter the bank, it is already time for it to close,” he said.

Horam urged the authorities to address the matter and not treat it like any other issue that is forgotten after some time.

Speaking to the Imphal Free Press over the phone, State Bank of India manager Uttam Luwang said that the bank which is run by only seven staff, including the manager, currently serves more than 40,000 customers.

As of now, the State Bank of India, Punjab National Bank, UCO Bank and Manipur State Cooperative Bank are the sole banks that have been catering services to the needs of Ukhrul.

However, SBI and the Punjab National Bank are the two major banks where majority of the district residents had opened their accounts.

When this Imphal Free Press correspondent asked some of the locals about the banking facilities and the customer services provided by these banks, majority of the customers expressed dissatisfaction with the service and had voiced the need for more branches and sub-branches in the town and urged the authorities concern to open more ATM machines to redress the genuine grievances of the people.

Punjab National Bank has two ATM machines while SBI has two, excluding the SBI branch set up at Somsai Army post. UCO bank has one ATM and the Manipur state Cooperative bank has two ATM booths.

As per sources, UCO bank currently has around 14,000 accounts and it employs four staff, one clerk and three officers. It has no immediate plan for expansion.

One Mayonpam Gachui said banks need to have “separate counters for aged people” as they deserve to be served and get done their work with ease. To carry out the work with ease and save time, more staff should be employed, he pointed out.

He also decried the work which goes at a snail’s pace for updating bank passbooks at Punjab National Bank which according to him takes several days.

Two students, Themreiso and Worngam expressed strong dissatisfaction with the way customers are being treated and alleged that the staff were being arrogant.

They also pointed out that they keep waiting for their turns until it is time for the bank to close. “Time is important for all of us. We had to study as well as attend to other chores,” they said.

It may be recalled that during the second wave of the pandemic, given the hardship faced by the people due to prolonged lockdown, the district administration allowed banks to operate daily with strict compliance to SOP. Following the relaxation, massive customers were seen standing in long queues, flouting all the covid procedures.

Limited banks and ATM facilities coupled with restrictions imposed to the villages and town localities for several months amid the coronavirus disease, have already intensified the customers’ woes.

Ukhrul has been reeling under intense banking distress for more than decades. Although the district populace has been voicing their untold hardships, no tangible improvement seems to have been initiated till date.

Setting up of sub-branches may help villages close to the sub division, but the majority are far off from it.  It was found that many poor villagers who travel to Ukhrul headquarters for banking purposes, particularly to withdraw their hard earned money and other incentives provided by the government were made to stand in long queues due to limited ATM facilities and lack of banks.

This long wait not only wastes customers’ time and energy but further burden the poor villagers as they were compelled by the circumstance to spend a night to complete their unfinished task as they could not finish their work in a day.

These poor banking facilities have also led to mushrooming of instant money transaction services. Those who do not want to waste their time standing in long queues to withdraw their money, find solace in private common service centres, though they have to pay for servicing charges.

But not everyone is visiting the bank for transaction work. They also visit the bank for updating their bank passbook and other matters.

Speaking to the IFP over the phone, UADC caretaker chairman Yaronsho Ngalung said that banking facilities in Ukhrul should improve for the welfare of the citizens. “There are about 80,000 to 1 lakh people in Ukhrul Headquarters alone. We need more ATM machines to be installed in colleges and schools including the premises of the Autonomous District Council office,” he expressed.

“Why are loans given only to limited customers? I strongly feel that loans should be given to all sections of society. All types of loans provided to citizens in other Indian cities and towns should also be provided to the citizens of Ukhrul as well. Loans like students' loan, car loan, housing loan, farmers' loan should be provided to all needy individuals,” Ngalung added.

Although Improvement in road connectivity has shortened the distance to reach the district headquarters; however, no tangible changes are visible in the banking sector. Besides shortage of banking facilities, shortage of staff is considered as one reason customers are unhappy.

When asked if there is any security threat in the district, SBI manager Uttam Luwang said that there are none.

“The only thing needed is that people need to change perception and that love for one another is the key to bridge the differences,” he said.

The newly appointed manager said that SBI had conducted three awareness campaigns in Ukhrul town with the sole aim to educate the district populace about financial literacy. “More awareness will be held at grassroot level as villagers have limited knowledge about the bank.”

He also said that SBI is coming up with a new branch in Jessami sub division.