Potholes have turned into the size of a pond and driving on the road has become risky for many drivers. 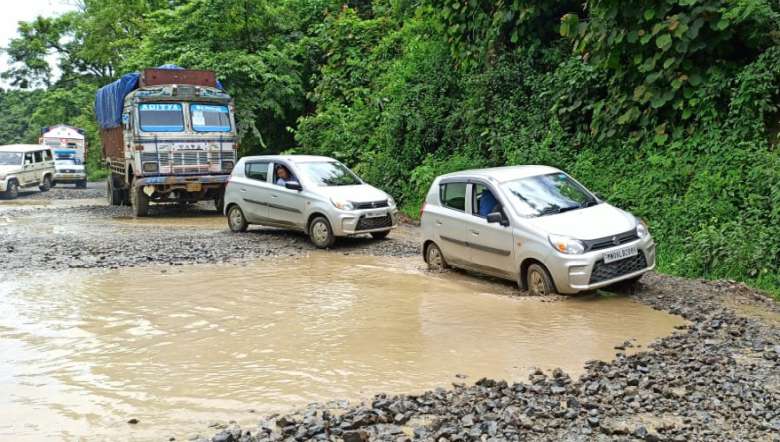 Associations claimed that the size of the potholes has increased with the onset of the rainy season (PHOTO: IFP)

The drivers associations in Manipur have appealed to the state government to repair the stretch between Motbung and Koubru Leikha under NH-2 during the lockdown before any untoward incident or mishap occurs in the highway.

General secretary of All Manipur Driver Welfare Association, Sanjoy Kshetrimayum said that the road stretch from Motbung to Koubru Leikha has worsened as the rainy season began. The potholes have turned into the size of a pond and driving on the road has become risky for many drivers.

The department concerned should repair the road before any untoward incident or mishap happens on the highway.

Secretary of Innovatory and Friends Mission, Manipur Nehkhothang Kipgen said that the National Highway Number 2 is the main lifeline for the whole state of Manipur and it is a part of the South East Asian Highway. As such, the state government should repair the road within the lockdown period before the normal lives resume. The dust produced from the roads affects the health of people living near the highway and even those passing by.

He said that such negligence on the part of the department concerned is also a violation of human rights. Even during the rainy season, the road is not in a favorable condition for the vehicles passing on the highway, said Kipgen.