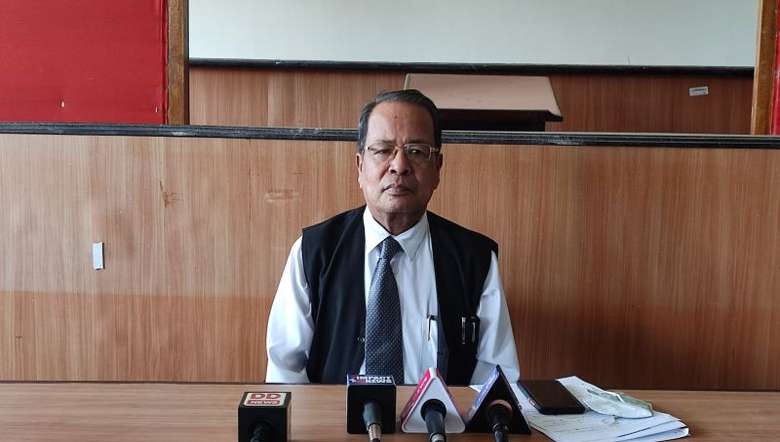 Responding to allegations made by the HRA, the Manipur Human Rights Commission (MHRC) on Saturday clarified that it is not at all concerned with the receipt of any credit from the public, and it is doing its duty as best it can to serve the people of Manipur who approached the Commission for the redressal of their grievances.

In a press meet held at MHRC office, its acting chairperson Khaidem Mani said MHRC makes it clear that it always follows legally acceptable traditions that are prevalent in the country.

He was responding to the allegations made by Babloo Loitongbam, in respect to the enquiry to be conducted by MHRC in connection with the death of Athuan Abonmei and concerning the distribution of rice to the beneficiaries of Tokpaching area under National Food Security Act and Pradhan Mantri Garib Kalyan Anna Yojana.

Babloo Loitongbam had said that “MHRC’s announcement to conduct inquiry into the case of Athuan Abonmai cannot be trusted because the Commission cannot keep its words” during a discussion at local TV channel on Thursday, he mentioned.

He said that the HRA also claimed in a press release published by a local daily that “on October 11, JAC submitted an application to initiate legal proceedings against wilful disobedience of MHRC's recommendation. However, the MHRC, instead of taking action against the authorities, caved in to their pressure and liberally allowed the compliance report to be filed on October 29.”

He clarified that in connection with the non-distribution of rice as per the requirement of National Food Security Act to the residence of Ward No IX/II of Heidroipokpi Leikai of Arong Nongmaikhong Gram Panchayat, Kakching district, one Ningthoujam Pateshori Devi of Tokpaching filed a complaint to MHRC, alleging that the deputy commissioner, Kakching and district supply officer failed to take necessary action despite submitting written representations.

MHRC had directed the deputy commissioner, Kakching and district supply officer to ensure that required rice is distributed to the eligible beneficiaries as per the requirement of NFSA and PMGKAY and submit the compliance report on October 7.

The case was put on October 11 as the date of submission of compliance report on October 7, 2021 being State Holiday on account of Mera Houchongba, he said. The district supply officer who appeared in person before this Commission on October 11 prayed that he may be allowed to submit compliance report after a fortnight on the ground that he was yet to receive an inquiry report from his staff, he further said. His prayer was allowed, directing him to submit a compliance report in pursuant to the proceeding of this Commission without fail. In compliance with the direction of this Commission, the district supply officer submitted his action taken report along with the acknowledgment of distribution of rice that he received from the complainant namely Ningthoujam Pateshori Devi, he added.

Human Rights Alert (HRA) executive director Babloo Loitongbam is advised to care about his speech delivered through public platforms and the media, he said and further pointed out that the process of inquiry and investigation is completely different. An investigation is to investigate the evidence while an inquiry means to inquire why-how-what, with specific time and person, he said. Therefore, the inquiry on the death of Athaun Abonmei is to find out the reason, the person who killed him, why he was killed, he added.

While the investigation by the NIA is to nab the culprits, the inquiry by the MHRC is to not only arrest the culprits but to prevent such incidents from happening again, he further said. The commission will also find out if there were any lapses from the state government and security personnel.

He also urged the family of Athuan Abonmai, JAC and people in general to co-operate the commission in the inquiry.