The fields are now inundated with sands and silts from the Vatthei river. Large portions of the field have been washed away by the flood. 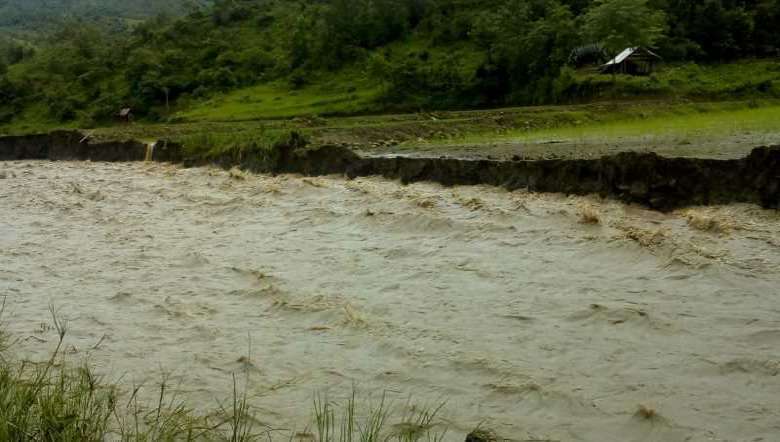 Several paddy fields at Hoomi village in Ukhrul district of Manipur have been completely destroyed owing to the rise in the volume of Vatthei river water caused by the torrential rains in the region since the past few days.

The fields are now inundated with sands and silts from the river. Large portions of the fields have been washed away by the flood.

“About 21,500 square feet of cultivated land belonging to 33 households have been affected by the flood. The fields yield almost 3,000 tins and are the main source of livelihood for many of the villagers,” Hoomi village secretary Vangam Zingkhai told IFP.

Zingkhai said that the farmers have just completed rice transplantation and were getting ready for clearing out the weed. The farmers are helpless and it is already late for further sowing of paddy seeds, he said, adding the only option left seems to be for them to wait out for this year and salvage whatever is left of their fields.

Zingkhai, on behalf of the affected villagers, appealed to the government for assistance to help them sustain in the coming months.

Hoomi is situated about 42 km west of Ukhrul Headquarters and has around 200 households. Vatthei River is a tributary of Thoubal River.

In the last few years, unpredictable weather condition has become a cause for concern for the farmers in Ukhrul district. Frequent occurrence of river flood, drought and landslides have greatly affected the production of food and consequently affecting their livelihood.